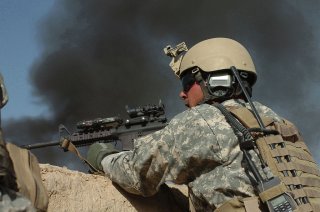 With last Thursday’s missile attack on a Syrian regime airfield, President Donald Trump not only sent Bashar al-Assad a message about his intentions—he also opened the floodgates for “the blob” in Washington to reassert itself. The reflexive interventionism that has dominated the foreign-policy establishment in Washington for decades, led today by senators from both political parties, are downright giddy: eleven weeks into his presidency and they wonder if perhaps Donald Trump is finally becoming one of them.

In the five days following the Tomahawk missile strike, lawmakers who have been pining for further U.S. military intervention in Syria’s mess of a civil war since the conflict started are doing all they can to convince Trump that a limited attack on the Assad regime is insufficient and that he needs to finish the job. It wasn’t a coincidence that the Sunday show lineup yesterday was filled by the likes of John McCain, Marco Rubio and Lindsey Graham—perhaps the three most hawkish Republican lawmakers on Capitol Hill today who incessantly equate American leadership and credibility on the world stage with scrambling the B-2 Spirits. Call it conspiratorial, but you could easily see all three of these guys getting together before the shows and ensuring that their talking points are matched up for maximum impact (Trump, after all, loves watching television).

Their recommendations yesterday were synchronized to a tee; follow up those airstrikes last week with more weapons to the Syrian opposition, the formation of safe zones and the destruction of the regime’s air force so civilians will no longer be susceptible to the barrel bombs and chlorine gas falling from above. In the words of Rubio himself, “How can we suppress the air defenses of the Assad regime? And that may include coalition use of force to ensure that these offensive operations from the air are not happening, and by the way keep our troops there.”

The interventionists are circling like sharks outside the White House, and they’re being assisted by the op-ed pages of America. America’s friends are hoping that President Trump will abandon “his long-standing isolationist instincts,” as if keeping the United States far away from a multifaceted internal conflict pitting jihadists against despots is some crazy policy in the mold of Neville Chamberlain’s Britain, per the Washington Post. It took the editorial writers of the Wall Street Journal, that neoconservative bastion composed of Dick Cheney lovers, less than a day to recommend a full-blown military campaign against the Syrian government—complete with neutralizing Assad’s airplanes, destroying its airfields, taking out its sophisticated air defense system, patrolling safe havens along the Jordanian and Turkish borders, and increasing military supplies to the opposition. Not once, of course, did they mention the role of Congress. Why on earth would this country need a full debate before embarking on a fourth war in the Middle East in sixteen years?

Fortunately, Trump has the American people on his side. According to polling from CBS News, Americans don’t want to step any further into the Syrian morass. The majority look at the recommendations propagated by the Wall Street Journal and shudder at the thought; only 18 percent, the survey finds, would support “full U.S. military involvement with ground troops.”

The open question, however, is whether the Trump administration can resist “the blob” mentality that is quickly enveloping Washington, DC. It takes an incredible amount of discipline and self confidence to go against the foreign-policy establishment on a topic of such significance. It gets even more difficult if you have hawks in your administration. Will Trump be able to trudge on without feeling tempted by the chorus?