Trump's Syria Folly Is Bad for Everyone 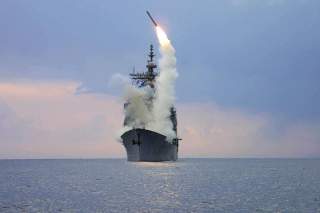 Less than three months into his presidency, Donald Trump has proved his criticism of America’s political class: that there really is little difference no matter who is elected. President Trump appears to have morphed into Hillary Clinton, or one of the many GOP neocons he battled during the primaries.

Candidate Trump made no pretense of offering a consistent foreign policy. However, he offered a very different vision from that of his opponents. It was “America First.” What that meant was not entirely clear—but at least, he indicated, Washington would improve relations with Russia while avoiding more foolish, unnecessary Middle Eastern wars. These two steps alone would be an extremely positive change.

But now President Trump plans to turn America into a global crusader. He ordered missile strikes in retaliation for the Syrian government’s apparent use of chemical weapons, and administration officials say more military action is possible.

Indeed, their comments suggest that they plan to dramatically expand Washington’s foreign policy objectives. Secretary of State Rex Tillerson and UN ambassador Nikki Haley both now indicate the administration might support regime change, a reversal of Trump’s campaign position. But then Washington would own what it broke: after the debacles in Iraq and Libya, the president would feel enormous pressure to have American troops occupy and rebuild the country—however long that might take.

But even this step might be merely a start. On Sunday, Haley, a Trump critic who never thought much about foreign policy while serving as South Carolina governor, announced an even more dramatic shift. Nothing “is off the table” when it comes to imposing sanctions on Russia and Iran for supporting the Assad government, she announced; “they now have to answer for” their support for Damascus.

The administration, said Haley, plans to exercise “strong leadership” and “act when we need to act.” Haley declared that the president “won’t stop here.” If “he needs to do more, he will do more,” she added. Senate majority leader Mitch McConnell announced that he plans to consider legislation to sanction the two nations as well.

The president, or at least his appointees, has seemingly gone mad. Candidate Trump correctly pointed out that the American people have nothing vital at stake in one of the most complicated and brutal civil wars of recent years. Now he is preparing to drag the United States into the conflict. Candidate Trump also promised the American people that he would focus on the Islamic State, which is promoting terrorism around the world, including in the United States. Now he seems ready to target the strongest military force opposing the Islamic State and other radical forces.

Moreover, Donald Trump took on Republican orthodoxy by criticizing George W. Bush’s misbegotten Iraq invasion, as well as President Barack Obama’s counterproductive Libyan intervention. Now Trump, or those around him, at least, are pressing for America to join an even worse killfest: one that has run for six years, hosted fighting of unparalleled ferocity, has few good guys and would shift to another dimension if Assad is ousted.

All of this for a conflict in which the United States has no stake, and that the public is unlikely to back the moment casualties occur. If Americans liked the results in Iraq and Libya, they would love the consequences of intervening in Syria.

Even before his latest flip-flop, it was clear that the president has at best a superficial understanding of international affairs. Apparently he had not noticed after years of war and hundreds of thousands of deaths that Bashar al-Assad was an unpleasant character. But one photo of the dead from a chemical attack, and Trump swung into action. Now not only must Assad go, but Iran and Russia must stop supporting Damascus.

It’s a sanctimonious stretch for a president who has tightened relations with Saudi Arabia, essentially a totalitarian state. Worse, the president has continued his predecessor’s policy of arming and refueling Saudi Arabian aircraft, which have been slaughtering Yemeni civilians—who have never done anything against America. But then, Washington has rarely let murder or repression stand in the way of a beautiful international friendship.

Administration officials from the president on down imagine that they can browbeat Iran and Russia into submission. But neither is likely to concede what they view as important, if not vital, interests. Syria is a long-time ally of Iran (which faces Saudi Arabia allied with other Sunni states) and Moscow (which forged a Cold War relationship with Assad’s father). After the U.S. strike, the Iranian and Russian governments announced, “We will respond strongly to any aggression on Syria.”

But Tehran and Moscow are concerned about more than retaining influence with the busted Syrian state. The Trump administration’s almost instantaneous pirouette from protecting U.S. interests to coercing other countries suggests that it shares the almost insatiable desire of Republicans and Democrats alike to micromanage the globe. Which explains why Russia and Iran declared that they “will not allow America to dominate the world.”

Of course, administration officials are citing Tehran’s and Moscow’s “complicity” in Assad’s crimes. But the president and those around him must be slow learners. When Candidate Trump was talking about cooperating with Russia, it was strongly backing the very same Assad government. Of course, those supporting radical Islamist opponents of the Assad regime, including Turkey and the Gulf states, are little better. Sadly, after perhaps half a million lives, the latest atrocity adds little to the moral horror of the conflict.

Washington’s threats against Iran and Russia undermine other serious U.S. interests. Turning Syria into a genuine proxy war with Moscow would risk a direct military confrontation with another nuclear-armed power. Russia also can assist—or impede—efforts to denuclearize Iran and North Korea, confront the Taliban in Afghanistan, battle terrorism elsewhere, and counterbalance China.

Indeed, one of the worst consequences of the Obama administration’s tough stance toward Russia was to push it and China together. The two are at best uneasy friends; Moscow has much to fear from Chinese encroachment in the Far East. However, both are unwilling to allow the United States to permanently dominate their regions, and especially their borders. Vladimir Putin is an unpleasant authoritarian, but his government’s ambitions appear bounded and do not conflict with fundamental U.S. security interests. Nothing in Syria justifies a potential great-power confrontation and conflict.

The Trump administration’s virulent hostility toward Iran is as foolish as it is obvious. The Islamic terrorism facing America is almost entirely Sunni, advanced not only by groups such as Al Qaeda and the Islamic State, but nominal allies such as Saudi Arabia, which promotes fundamentalist Wahhabi theology around the world, including in America, and whose people have provided personnel and cash for terrorist groups. Iran is more diverse and cosmopolitan, and substantially freer—with elections that matter and minority religions that worship. The Tehran government remains authoritarian and threatening, but the nuclear deal reduced the likelihood that Iran will develop nukes. Moreover, including the country and its people in the global economy offers more reason to struggle against clerical elites for Iran’s future.

Such a future is likely to disappear if the administration applies new sanctions, and especially if it succeeds in replacing Tehran’s next-door ally with a U.S. proxy—imagine Washington’s reaction if the Soviet Union had installed a friendly regime in Mexico. America bears much of the blame for Iran’s hostility, having ousted a democratically elected government in 1953 and backed Saddam Hussein’s war of aggression against Iran during the 1980s. The Trump administration is threatening to initiate a new round of enhanced antagonism.

Three years ago Trump argued against attacking Syria: “There is no upside and tremendous downside.” That remains the case today.

It’s impossible for outsiders to know whether the president controls his administration’s foreign policy. The claim that he reversed policy after seeing a few photos suggests not. But ultimately he bears responsibility for a policy that looks extreme and unbalanced even by the standards of those he criticized during the campaign.

He explained his flip-flop: “I now have responsibility for Syria.” But that’s what one would expect the politicians he defeated to say. President Trump should recognize that he was elected as steward of the American republic and its people. To fulfill that responsibility, he should keep the United States out of the Syrian Civil War.