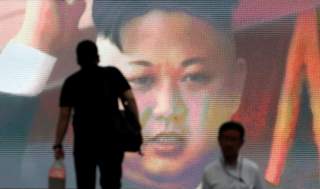 Last week, President Donald Trump and South Korean president Moon Jae-in strutted up to two podiums in the White House Rose Garden with two major objectives. The first—to reassure Americans, South Koreans and the rest of the international community that the U.S.-South Korea alliance is as solid as a rock, even with Trump at the helm—was for the most part successful. The second, which entailed warning North Korea that it better behave soon or else certain options would be taken in response, was more of a public-relations show than anything else.

Trump’s unequivocal declaration that “the year of strategic patience with the North Korean regime has failed and that the “patience is over,” was well and good for the cameras. Everybody in Washington likes to sound like a hawk on North Korea—it’s as American as apple pie. But the strong and forceful rhetoric Trump delivered wasn’t a policy, which is sorely what the administration needs if it has even a slim possibility of arresting the development of Pyongyang’s nuclear weapons and ballistic-missile programs. A policy on North Korea was needed yesterday; now that Kim Jong-un has passed the ICBM test, the White House can’t wait any longer.

The conundrum with North Korea is that none of the options are good. Despite Trump’s self-assuring rhetoric that the United States has “many options,” the reality is exactly the opposite. Either Trump hasn’t been paying attention to his briefing books, or he’s embellishing through his teeth in an attempt to convince Americans that he has a few aces up his sleeve.

Presumably, one of those cards is U.S. military action, a last-ditch option that would pretty much guarantee the leveling of the South Korean capital, tens of thousands of civilian casualties, perhaps thousands of American casualties, and the highly likely prospect of further escalation between the two Koreas. Sure, this is one of Trump’s “many options,” but it’s not one that is particularly productive.

So, what other alternatives are there? The Trump administration has so far thrown most of its chips in the China pot—pressuring and/or cajoling Chinese president Xi Jinping that it’s in his country’s interest and the region’s interest to sever the lifeblood of money flowing into North Korea courtesy of banks, middlemen, black-market smugglers and financial subsidiaries operating on Chinese soil. In the spring, Trump came away with his buddy-to-buddy chat with Jinping at his Florida resort sounding as if he cracked the code with China that other American presidents couldn’t figure out. After that summit, Trump genuinely believed that he struck a positive note with Jinping, lavishing personal praise on him (“he’s a great guy,” “He is a very good man and I got to know him very well”) and describing him as a transformational political figure who had the power to deal with the international community’s most immediate national-security threat.

But several months later, the bet on China has increasingly looked like a losing prospect. Although Beijing has cut North Korean coal imports to near zero levels for the last three months, there is still plenty of business going on across the Chinese-North Korean border. The Treasury Department wouldn’t have recently sanctioned a top Chinese bank if the administration didn’t believe that Beijing needed a jolt to the arm.

So, if military action would be a disaster and the Chinese route looks less than fleeting, what other options are there?

Regrettably, there may be only two options left—and both aren’t exactly popular in Washington.

One is admitting the obvious: that North Korea is a nuclear-weapons state whether America likes it or not, and that the time has come for a full U.S.-led containment strategy with South Korea, China, Japan and Russia. Containment would mean deploying more anti-missile defense systems in the area, expanding the THAAD system into Japan, placing an additional aircraft carrier permanently in the waters of the Pacific, and tripling down on missile defense to protect American cities on the West Coast. Congress would certainly appreciate the extra investment in missile defense, but would be absolutely livid if the White House simply accepted North Korea as a member of the nuclear club. The politics would be terrible for the administration and for the president personally, especially with members of his own party.

The last option would require another round of diplomacy—a decision that is unpopular in Washington on a good day, but detested at present given Otto Warmbier's untimely death and Pyongyang’s successful ICBM launch. The diplomatic route would require U.S. diplomats to sit down with the North Koreans and negotiate with them directly, a picture that would be revolting to a lot of Americans. It would also require the United States to offer some concessions to Pyongyang in exchange for a suspension of its nuclear and missile testing, a stoppage of nuclear research and development, and a commitment that U.N. Security Council resolutions would no longer be violated every other day. Kim Jong-un would certainly have a lot of asks; he’ll probably ask for the moon and the stars, perhaps calculating that the United States needs North Korea to cease its nuclear program more than North Korea needs Washington to provide sanctions relief. And there’s always a very good possibility that discussions with North break down entirely, which has happened so many times in the past that it’s become part of the script over the last two decades.

These are the options for President Trump. He really doesn’t have any other roads to travel down, notwithstanding the myths that he tells himself.