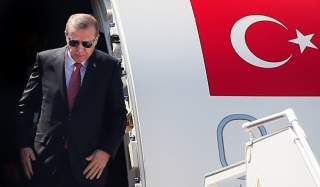 Turkey’s warming of relations with Russia following the failed coup in Turkey has been the focus of much analysis during the past month. However, an equally—if not more—important development, the improvement of Turkey’s relations with Iran after the coup, has gone largely unreported if not totally unnoticed. This latter development, one must admit, has been in the making for some time and is not exclusively the result of the failed putsch. Nonetheless, the coup attempt and its failure have given a major boost to the Turkey-Iran relationship.

The improvement has taken place despite the fact that Iran, like Russia, is a principal supporter of the Assad regime in Syria, which was until recently Ankara’s bête noire. A number of factors have contributed to this development. First, the Turkish government has come to realize in the past few months that ISIS, not Assad, should be its primary concern in Syria. This realization dawned upon Ankara with the escalation of ISIS’s terror attacks in the country, which have left scores of people dead. The attack on the Istanbul airport on June 28, which killed forty-one people, proved to be the final blow that exploded the myth that Assad posed a major threat to Turkish security. It made clear that Syria’s neighbors—Iran, Iraq and Turkey—faced a common, some would even say existential, threat in the shape of ISIS. It further made clear that Iran and Turkey must move toward devising a joint strategy in order to eliminate this threat.

Assad thus became a secondary problem from Turkey’s perspective. Turkey’s changing stance toward the Assad regime was evident from the statement made by Turkish Prime Minister Binali Yıldırım on July 13 that “I am sure that we will return [our] ties with Syria to normal. . . . We need it. We normalised our relations with Israel and Russia. I’m sure we will go back to normal relations with Syria as well.” This change in the Turkish stance has paved the way for the improvement of relations with Iran, which is actively involved in defending the Syrian regime indirectly through its ally Hezbollah and directly through elements of the IRGC in advisory and sometimes battlefield roles against Syrian insurgents.

Secondly, the Syrian insurgency has brought home the fact both to Ankara and Tehran that the principal beneficiaries of the breakup of Syria—which is likely to happen if Assad falls—will be the Syrian Kurds and especially the PYD, which has strong links not only to the PKK in Turkey but also to the PJAK, the Kurdish insurgent movement engaged in fighting Tehran. The PYD has moved in to control the bulk of the Kurdish areas in Syria as the Syrian regime’s control over these regions bordering Turkey and Iran has eroded. While initially this led to some acrimonious exchanges between Ankara and Tehran, with the former accusing the latter of encouraging Kurdish forces in order to destabilize Turkey, it soon dawned upon both that they had to cooperate in order to mitigate the damage that could be inflicted on the territorial integrity of both states by the Kurdish regions’ successful secession from the rest of Syria. Any form of Kurdish independence is anathema to both Turkey and Iran.

Third, the coming into force of the Iran nuclear deal last January, and the consequent lifting of economic sanctions imposed by the UN Security Council, the EU, and the United States on Tehran, are perceived in both Ankara and Tehran as a major boost to their trade relations. Trade between the two countries had been hampered by the imposition of financial restrictions on Iran, which prevented Turkey from paying for the energy resources it imported from Iran, therefore restricting the flow of gas and oil. Turkey traditionally buys about a quarter of its oil and about a fifth of its gas from Iran. The lifting of sanctions, according to projections made in both countries, is likely to triple the volume of trade between the two countries to $30 billion in two years.

While these underlying factors have been at work driving the two countries toward better relations, the failed coup has given added impetus to this movement. The Iranian leadership was genuinely concerned that a successful coup would destabilize not merely Turkey but the entire region and would have deleterious consequences for Iran itself. This was clearly demonstrated by the fact that Javad Zarif, the Iranian foreign minister, was in touch with his Turkish counterpart throughout the night of the coup, calling him at least four times during those fateful hours in order to, among other things, boost the Turkish government’s morale.

The sympathy and support extended by Iranian elites to the Turkish government has had a major psychological impact on President Erdoğan and senior policymakers in Ankara. The Iranian stance was in stark contrast to that adopted by the United States and EU, whose leaders were at best lukewarm in their support for the Turkish government. In most cases, they were more interested in lecturing the Turkish government not to abuse its emergency powers in the wake of the coup rather than enthusiastically welcoming its success in crushing the coup. It has not gone unnoticed in Ankara that it was not its formal allies, but Iran and Russia, with both of whom Turkey has had major differences, who stood by the government and the people of Turkey in their time of greatest need.

Iranian stock has, therefore, risen sharply in Turkey. To add to this, the massive purging of Gülenist elements from positions of power and influence after the failed coup must have appeared a welcome development from Iran’s perspective. To the Iranians, whether the Gülenists were involved in the putsch or not is irrelevant. What mattered most is that the Gülenists have a reputation for being viscerally anti-Iranian and anti-Shia, influenced as they have been by the history of the Ottoman-Safavid rivalry as well as their ideological antipathy toward Shia Islam. Therefore, the removal of the remnants of the movement from Turkey’s decision-making circles is bound to make relations between Turkey and Iran less ideological and more pragmatic by removing the veneer of Sunni-Shia rivalry that had come to overlay the relationship.

This new phase in the Turkey-Iran relationship is likely to be critical for the entire Middle East. The reason for this is simple. The Arabs having written themselves off, because of the internecine bloodletting on which they seem to thrive, Iran and Turkey remain the two pivotal powers in the region. It would not be wrong to argue, therefore, that the level of stability and order in the Middle East will depend on their relationship with each other. If they can cultivate a relationship based on mutual trust and the ability to accommodate each other’s vital interests—and they seem to be moving in that direction—the Middle East may still bounce back from the depths of anarchy into which it has fallen.

Washington ought to welcome this development as well, because of its interest in maintaining stability in the Middle East, eliminating the threat from the ISIS, integrating Iran economically and politically into the international community—thus countering its residual revanchist tendencies—and enabling Turkey to roll back its repressive policies by assuring the Erdoğan government of its safety and security.