Video Interview: Next Steps in Syria and the Utility of Offshore Balancing 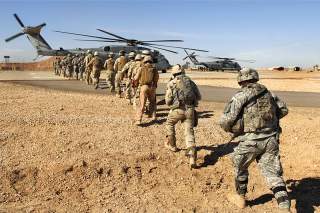 Editor's Note: In our latest Facebook Live interview (please like our Facebook page to see more of these events) Harry Kazianis, Director of Defense studies at the Center for the National Interest, sat down with Lt. Col. Daniel L. Davis (Ret.), a senior fellow at Defense Priorities, and Emma Ashford, a research fellow at the Cato Institute. The three discussed Washington’s next steps in Syria, in addition to the utility of offshore balancing in the Middle East. You can check out a portion of Emma Ashford’s most recent article below:

Xi Jinping’s meetings with Donald Trump at Mar-a-Lago this week will be contentious, with violent disagreements on trade and other economic matters expected to dominate the discussions. There is, however, scope for agreement on the other big issue of the day: North Korea. In fact, if Donald Trump can swallow his pride and learn from his predecessor—applying the core principles of Obama’s Iranian nuclear deal to North Korea—he could actually notch up a foreign-policy success.

Clearly, major differences exist between the North Korean and Iranian nuclear crises. Unlike Iran, North Korea has already gone nuclear, successfully testing a number of devices and possessing substantial offensive capabilities. Geopolitical, economic and geographical differences between the two states abound. Most notable may be North Korea’s relative autarky and separation from the global economy, which makes it substantially harder to craft effective sanctions than it was in the Iranian case.

Yet the two cases are alike in one key way: policymakers face a major nuclear proliferation problem with few good options for resolving it. North Korea continues to conduct missile launches. Multiple launches in recent months are no longer mere tests; instead, North Korea appears to be running missile drills for training purposes. At the same time, the country’s development of more sophisticated bombs and delivery vehicles continues.

The Trump administration has so far taken a confrontational approach, suggesting that military options remain on the table, and that they may consider applying secondary sanctions to Chinese companies that trade with North Korea. Yet neither option is likely to alter North Korea’s behavior. Luckily, the Obama administration’s experiences in negotiating the Joint Comprehensive Plan of Action (JCPOA) with Iran suggest that a broad set of principles may increase the chances of a diplomatic solution.