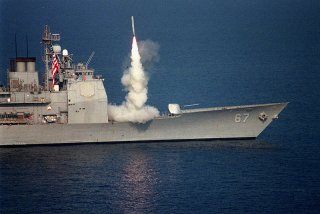 Editor's Note: Lt. Col. Daniel L. Davis (Ret.), a senior fellow at Defense Priorities, and Harry Kazianis, Director of Defense studies at the Center for the National Interest, discussed President Trump’s decision to strike a Syrian airbase with Tomahawk Cruise missiles. This conversation was recorded on Facebook Live. You can check out an excerpt of one Daniel Davis’s most recent articles, The Syrian Chemical Attack: Washington Must Not Make a Bad Situation Worse, below as well as Kazianis’s article in USA Today here:

There is currently no existing legal justification for attacking Syria, no matter how gruesome its behavior. Before the president orders any military strikes, Congress is obligated to debate the matter.

If it deems there is sufficient justification, then Congress can pass a new authorization for the use of military force. Without a new AUMF, the United States cannot attack. Doing so would violate the constitution. Without a UNSC resolution, an attack on a sovereign state would be a violation of international law.

Prior to the UNSC emergency meeting, Russian Foreign Ministry Spokeswoman Maria Zakharova categorically rejected a draft resolution threatening military action against Syria. When the resolution comes up for a vote, both Russia and China may veto the measure, like they did in February. President Trump, however, appears determined to respond regardless.

Were U.S. national security at stake, that would not matter nearly as much. But in Syria, America was not attacked—innocent Syrians were targeted.

At a Rose Garden press conference with Jordan’s King Abdullah II, President Trump reminded one reporter that he doesn’t like to say publicly when he would or wouldn’t launch a military attack. But he did say that the attack “crossed a lot of lines for me. When you kill innocent children, innocent babies—babies, little babies—with a chemical gas that is so lethal . . . that crosses many, many lines, beyond a red line.”

If there is to be any military action, it must be legal, and it must be supported by the American people. Perhaps more so than at any time since 9/11, Congress must fulfill its constitutional obligations and do its job.