Warsaw: NATO's Theater of the Absurd 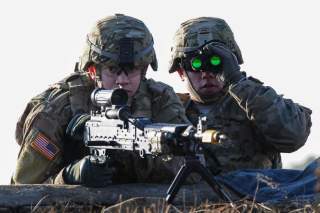 Time for another NATO Summit, this one in Warsaw, Poland. Each has a theme, several photo ops for the attending leaders, a terrific dinner, an official communique, four or five white papers for reference, and culminates with a renewed resolve for the common defense. The 2016 Warsaw Summit theme is a bit ironic as it focuses on fending off the Russian threat to former members of the Warsaw Pact who are now NATO members. But, as is usual since the end of the Cold War, the Summit is mostly NATO Theater of the Absurd.

Russia only possesses a population of 143 million. It is not about to invade a NATO country and risk war with an alliance that possesses a combined population of nearly nine hundred million, is built around the vastly superior military power of the United States, and has access to the industrial capabilities of both Europe and North America. It is not the upcoming rotational stationing of four battalions—less than four thousand soldiers total, one battalion in each of the Baltic States and Poland that the Summit heralds that frightens off Putin. Rather, it is any half- reasonable assessment of the military balance that provides the deterrent. The four battalions are cheap reassurance for the people in NATO countries bordering Russia who may have been worried by recent NATO scare mongering about Russian rearmament and its use of “little green men” in the Ukraine, likely Russian Special Operations soldiers fighting as volunteers and without insignia.

Defense against the little green men in the Baltics is the strength of local political systems, and especially their fair treatment and effective integration of Russian speaking minorities, not the deployment of combat units, no matter how big or small, from NATO lands to the West. For all its white papers and study groups, NATO never quite gets around to discussing the tolerance of minorities in Middle East or Eastern Europe where NATO trains locals to deal with insurgents.

Warsaw, like all NATO Summits, features the restatement of the collective resolve to increase NATO defense spending, now embodied in the elusive and distant goal of two percent of Gross National Product (GDP) devoted to defense. Two percent is a meaningless goal. While two percent of Albanian GDP hardly matters, one percent of German GDP certainly does. Greece may reach the benchmark, but contributes next to nothing to NATO’s venture in Afghanistan. One-percent Denmark does plenty there and against ISIS. There are lots of ways to contribute to the collective defense besides producing battalions or fighter aircraft for the cause. Greek bases are important to the alliance as are those in Spain and Italy.

The two percent goal is a sop to portions of the American public, now including Barack Obama and Donald Trump, who complain about NATO allies’ free riding on the backs of the American military and taxpayers. The United States stations more than seventy thousand troops in Europe and is augmenting that number with a rotating armor brigade and other units. For some, Russia nibbling on the borders of its lost republics doesn’t threaten American security. But for President Obama and the American foreign-policy establishment, if not Donald Trump, it doesn’t really matter how much the allies contribute to their own defense or how unimportant things are in this or that corner of Europe, the United States wants to be in charge of European security and will pay to do so. The fear is that alternative security arrangements, including those organized via the European Union, would be too appeasing or weak. NATO is the United States’ way to manage European security. The United States would do it for free, and the NATO nations know that and spend accordingly. The two percent goal is there to distract attention from this reality.

Harvey M. Sapolsky is Professor Emeritus at the Massachusetts Institute of Technology and former Director of the MIT Security Studies Program. Elizabeth S. Barnes is an International Relations student at the University of St. Andrews in Scotland.