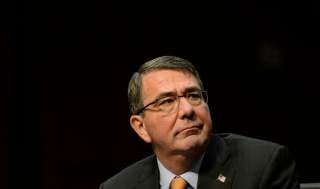 Last week in Washington, an extraordinary gathering of foreign and defense ministers of thirty nations met to chart the next phase of the anti-Islamic State (ISIS) campaign. All indicators suggest the meeting’s outcome will only deepen the strategic failure that has plagued the mission to date.

Not everything associated with the mission has been a failure, however. On the tactical and operational levels there have been a number of fairly meaningful successes. Since whole divisions of the Iraqi Security Forces (ISF) disintegrated in battle against ISIS in 2014, the army has regrouped, retrained some of its forces and have won some tough battles.

Beginning in late 2015, the ISF recaptured Ramadi, Tikrit and last month Fallujah. Next in their sights is Iraq’s second largest city, Mosul, the self-proclaimed Iraqi capital of ISIS. The implications from senior U.S. and NATO officials is that ISIS must be militarily defeated in Iraq (and eventually Syria) in order to keep the US homeland safe.

Secretary of Defense Ash Carter told NPR’s Morning Edition last week that “Raqqa in Syria and Mosul in Iraq are our two primary objectives because they are…the self-proclaimed capital(s) of the self-proclaimed caliphate.” He said the coalition needed to retake those cities to “make sure that there isn't any ISIS planning done there. It's important to show that there cannot be and will not be an Islamic State based upon this ideology.”

The same day Secretary of State John Kerry hosted a meeting of several foreign ministers and warned that “If we do not succeed in Iraq, none of our countries will be safer.” But are Carter and Kerry correct? Will the retaking of the physical territory held by ISIS keep the United States safe?  Based on the past fifteen years of experience—and of the past six months in particular—the answer would appear to be a resounding no.

The administration and NATO’s favored tactics to accomplish the objectives outlined above are primarily based on two major pillars. First, using various types of intelligence, attack ISIS personnel from manned and unmanned bombers. Second, empower or train local fighters on the ground to defeat the Islamic State. In Iraq that is primarily the ISF, Shia militia, and Kurdish Peshmerga. In Syria, it is the U.S.-designated “moderate” Islamic rebels. In practice, both columns are crumbling, damaging Western interests in the process.

In Iraq, there is a tenuous relationship between the official government troops, the Shia militias and the Peshmerga. When ISIS is eventually defeated militarily—and it will be—the animosities and competing national agendas that plagued the three groups before there was an ISIS will come back to the fore. Along with the restive Sunni minority, it’s not at all clear another civil war won’t break out in Iraq following the collapse of ISIS.

In Syria, U.S. and coalition aircraft have mistakenly killed innocent civilians along with ISIS fighters. That was put on ugly public display this past weekend when allegedly upwards of one hundred civilians were killed by coalition attacks. It was so bad that two of the leading rebel groups the United States supports were harsh in their condemnation of the attack, demanding accountability for “those responsible for such major violations,” claiming the deadly mistakes amounted to an effective “recruitment tool for terrorist organizations.”

The training of rebel groups has been an unmitigated disaster from the beginning, and evidence continues to surface that some of the so-called “moderate” rebel groups perpetrate the same brutality as does ISIS or Assad’s troops.

Aside from major missteps in the conduct of the tactical fight, the results of two years of trying to destroy ISIS militarily has resulted in the dramatic spread of the group to dozens of countries around the world. There has been a dramatic increase in the number and severity of domestic terrorist attacks in the US and other Western countries. Moreover, the ISIS leadership is already preparing its followers for the eventual loss of its territory in Iraq and Syria, instructing them to go underground and continue the fight via decentralized franchise-type cells.

And while the military has focused on ISIS, our arch enemy Al Qaeda has been greatly expanding the number of its followers, possibly rising to a level of power and capabilities that exceeds that of the bin Laden version.

The evidence is overwhelming that Washington’s myopic reliance on using blunt force to destroy the terrorists has instead caused the threat to markedly increase over the past several years, placing U.S. citizens at increasing risk. If significant changes are not made in the administration’s approach to the scourge of violent Islamic radicalism, the nation’s security situation will continue to deteriorate.

It remains yet to be seen just how far Americans—politicians, media and the general population—are willing to sit passively by and watch as the senior politicos and policymakers steadfastly keep the ship of state on a course that cannot succeed. The past two Administrations—and the Congresses that funded them—have fifteen years of crafting and implementing foreign and defense policies that have produced almost nothing but strategic failure. One has to wonder how many more years of failure at this magnitude has to pile up before corrective action is taken.