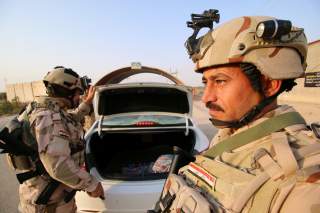 The results of Iraq’s parliamentary elections confirm that U.S. leaders and the American news media still don’t have a clue about the complex political dynamics in that country. Experts and pundits expected U.S.-backed incumbent Prime Minister Haidar al-Abadi’s party to prevail. Instead the party headed by radical Shiite cleric Muqtada al-Sadr won a plurality of the votes. Sadr is a long-time U.S. nemesis who opposes Washington’s Middle East policy agenda and especially the presence of American troops in Iraq. Indeed, during the years immediately following Washington’s war to depose Saddam Hussein, Sadr’s armed followers frequently clashed with U.S. occupation forces.

His resurgent political prominence is more than a little worrisome to Trump administration officials. But from their standpoint, Sadr does have one virtue: he dislikes Iranian influence in his country almost as much as he does U.S. influence. His stance is solid evidence that Shiite solidarity goes only so far. Despite the mutual religious identity, there still is a significant, historical tension between Arabs and Persians that surfaces from time to time. Sadr epitomizes that ethnic distrust.

A more worrisome aspect of the election results from Washington’s perspective is that the party finishing second in the balloting, the Fatah (Conquest) Coalition, does not share Sadr’s wariness of Iran. Indeed, that Shiite bloc represents the interests of pro-Iranian militias that Tehran has funded generously, supplied with military hardware, and even provided direct assistance with its own “volunteers” on occasion. The bottom line is that the two strongest political factions in Iraq are both vehemently anti-America, and one also is strongly pro-Iran. One could scarcely envision a worse result in terms of Washington’s policy goals.

To the surprise of Western observers, Abadi’s party finished an anemic third. That disappointing performance is merely the latest in Washington’s long record of choosing Iraqi clients with weak public support. George W. Bush’s administration and its neoconservative allies assumed that Ahmed Chalabi, the head of the Iraqi National Congress, would be Iraq’s new leader once Saddam was overthrown. Indeed, the United States provided millions of dollars to the INC in the years leading up to the 2003 invasion and occupation. Yet when parliamentary elections occurred, Chalabi’s party garnered a pathetic 0.5 percent of the vote.

Washington’s next client was Nouri al-Maliki. His tenure in office was characterized by a relentless drive to marginalize and alienate the country’s Sunni minority that had been the political base for Saddam’s Baathist ruling party. Maliki’s vengeful approach, combined with his administration’s legendary corruption, paved the way for the rise of ISIS and that extremist faction’s shocking initial military victories in Iraq’s civil war.

Not only were the latest election results in Iraq as a whole a major setback for U.S. policy, the outcome in Iraqi Kurdistan was worrisome as well. The Kurdish regional government (KRG) was a staunch U.S. ally in the war against ISIS—as were Kurdish forces across the border in Syria. Some pundits and policy experts regarded the Kurds (along with Israel) as Washington’s most reliable allies in the Middle East and urged stronger ties with the KRG, even if that step annoyed the central government in Baghdad.

The 2017 decision of KRG president Masoud Barzani to hold a referendum on full independence from Iraq, however, disrupted the alliance with Washington. That move angered nearly all neighboring countries, most notably America’s NATO ally, Turkey, as well as the Baghdad government. U.S. leaders pulled back their support for the KRG, and the Iraqi national army launched a major crackdown. By overreaching, Kurdish leaders lost control over the oil rich city of Kirkuk and lost much of the self-governing status that the region had achieved in the years since Saddam’s ouster.

Expectations were widespread that Barzani’s Kurdistan Democratic Party and the region’s other longtime major party, the Patriotic Union of Kurdistan, would suffer the electoral consequences of their tactical blunder. The Goran reform movement especially seemed poised to make major gains. Instead, both parties suffered only modest losses. Gorran and other opposition factions immediately screamed “fraud,” and there was strong evidence of election irregularities. Tensions have already escalated into violence in some northern Iraq cities.

Washington now confronts a situation in which Iraqi voters have rebuffed its principal political client at the national level, and the once promising collaboration with a stable, pro-American Kurdistan is in tatters. Yet even in this deteriorating environment, Trump administration officials apparently intend to retain a U.S. military presence in Iraq indefinitely. Such a policy looks less and less sensible or even viable. U.S. policymakers have made faulty assumptions about that country now for nearly two decades. The original belief that the Bush administration embraced, and which the Obama and Trump administrations followed, that Iraq could become a stable, united, democratic, pro-American bastion in the Middle East has proven fallacious on multiple levels. It is time to recognize the limits of U.S. influence and reassess a disastrous policy. The Trump administration needs to develop a prompt exit strategy from the Iraqi morass.