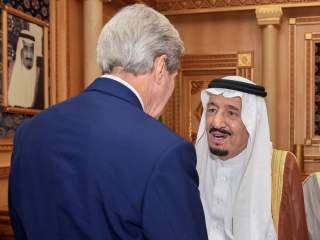 A major part of the current turmoil in the Middle East is the product of a regional power struggle between the Shiite and Sunni branches of Islam. Iran is the leader of the first faction and offers strong support to the Shiite-dominated government in neighboring Iraq. Tehran is also the principal patron of Bashar al-Assad’s “coalition of religious minorities” regime in Syria (which is led by Assad’s Alawites, a Shiite offshoot), and it is a backer of Shiite movements in Lebanon, Bahrain, and Yemen.

Although Turkey has played a significant role on behalf of Sunni causes in Syria and Iraq, as a non-Arab power (and with a history as the pre-twentieth century colonial master), Ankara’s influence among Arab factions remains limited. Saudi Arabia, together with Qatar and other smaller Gulf allies, has been and remains the principal backer of Sunni causes against Shiite adversaries.

The United States has consistently tilted toward the Saudis. Even when Washington’s ally, the Shah, ruled Iran, one could notice at least a slight bias in favor of Riyadh. Once the Islamic Revolution engulfed Iran in 1979, U.S. hostility toward Tehran became consistent, persistent, and intense. At the same time, the strategic relationship between Washington and Riyadh deepened.

There are numerous reasons why Washington has little love for Tehran. Americans recall all too well the searing pictures of the U.S. diplomats who were held hostage at the end of Jimmy Carter’s administration. And Iran was implicated in attacks on U.S. forces in the Middle East, including the bombing of the Marine barracks in Lebanon in 1983 and the 1996 bombing of the Air Force quarters in the Khobar Towers in Saudi Arabia. Instead of asking what U.S. troops were doing in such volatile combat zones that have little, if any relevance thing, to genuine American security interests, the American people have developed a visceral hatred of Iran. U.S. leaders have been equally hostile over the past three and a half decades. That official hostility has ebbed just slightly in light of the new agreement between the P5+1 powers and Iran concerning Tehran’s nuclear program.

Given the widespread negative perception of Iran, the unfriendly U.S. stance is understandable. Americans should have little reason to like Saudi Arabia either, but that is not reflected in the attitude of the political elites or in any aspect of U.S. policy. U.S. officials and prominent political figures from both parties routinely describe Saudi Arabia and its Sunni Gulf clients as “friends” of the United States. But Americans should take a closer look at the nature of their Saudi “friends.”

Despite Riyadh’s important role in the global oil market, Saudi Arabia’s domestic behavior alone should probably disqualify the country as a friend of the United States. Riyadh’s reputation as a chronic and horrific abuser of human rights is well documented. Indeed, even as Americans and other civilized populations justifiably condemned ISIS for its barbaric practice of beheadings, America’s Saudi ally executed more than 150 people in that fashion in 2015—Riyadh is off to an even faster start in 2016, and many of the victims, such as the prominent Shiite cleric Nimr al Nimr, had apparently done nothing more than demonstrate against or publicly criticize the regime.

But in addition to its awful domestic conduct, Riyadh has consistently engaged in actions that undermine America’s security. As far back as the 1980s, when the United States and Saudi Arabia were supposedly on the same side, helping the Afghan mujahedeen resist the Soviet army of occupation, Saudi officials worked closely with Pakistan’s intelligence agency to direct the bulk of the financial and military aid to the most extreme Islamist forces. Many of them became cadres in a variety of terrorist organizations around the world once the war in Afghanistan ended.

Saudi Arabia’s support for extremists in Afghanistan was consistent with its overall policy. For decades, the Saudi government has funded the outreach program of the Wahhabi clergy and its fanatical message of hostility to secularism and Western values generally. Training centers (madrassas) have sprouted like poisonous religious mushrooms throughout much of the Muslim world, thanks to Saudi largesse. That campaign of indoctrination has had an enormous impact on at least the last two generations of Muslim youth. Given the pervasive program of Saudi-sponsored radicalism, it is no coincidence that sixteen of the nineteen hijackers on 9-11 were Saudi nationals.

One would think that given that track record, U.S. officials would be wary about supporting the initiatives of its Saudi “ally.” But such caution has not been evident. In 2011, Washington quietly endorsed the Saudi-led military intervention in Bahrain to keep the Sunni royal family in power. Yet that action constituted blatant interference in the internal affairs of another country and ran counter to strong evidence of what the majority of the population (Shiites without political rights) wanted.

U.S. involvement escalated with regard to Saudi Arabia’s more recent military intervention in Yemen against the Iranian-backed Shiite Houthis. In this case, the United States is apparently providing intelligence information and logistical support for the intervening forces. This action deepens U.S. meddling in a complex civil war, and arguably on the wrong side of that conflict.

Washington is now flirting with endorsing a Saudi (and Turkish) initiative that could prove even more damaging than the interventions in Bahrain and Yemen. Riyadh and Ankara have expressed their interest in sending ground troops into Syria. But having Saudi and Turkish troops operating in Syria, backing favored clients, complicates an already difficult situation. U.S. leaders exhibit a curious myopia if they do not see the underlying problems.

The reflex reaction in the United States since the overthrow of the Shah of Iran has been to assume that Iran is an implacable enemy and that Saudi Arabia is a crucial ally and friend. The reality is much more complex and disturbing. Iran, in its current form is a repressive quasi-theocracy, and it is certainly no friend of the United States. Despite the current agreement, Tehran may even still harbor nuclear ambitions.

Iran’s clerical regime considers America “the Great Satan” and often tries to undermine American interests—and that is likely to ease just slightly with the new mandate given to the “moderate” government of President Hassan Rouhani. But it is also true that Tehran and its Shiite allies in Iraq and Syria are the principal barriers to ISIS and its expansion. If Washington regards the defeat of ISIS as a high priority, simultaneously trying to undermine Iran makes little strategic sense. And one should not forget that Saudi Arabia has been instrumental in fostering the rise of ISIS and other Sunni extremist groups. Riyadh has undermined America’s security at least as much as Tehran has over the decades.

The bottom line is not especially comforting. The evidence indicates that Iran is bad, but Saudi Arabia is at least as bad—and may be even worse—from the standpoint of American interests. The alliance with Saudi Arabia should appeal only to masochists.

Ted Galen Carpenter, a senior fellow at the Cato Institute and a contributing editor at The National Interest, is the author of ten books and more than 600 articles on international affairs. His latest book, coauthored with Malou Innocent, is Perilous Partners: The Benefits and Pitfalls of America’s Alliances with Authoritarian Regimes (2015).