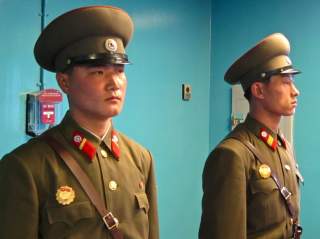 Washington has long told the rest of the world what to do. But the world usually pays little attention. When ignored, U.S. officials typically talk tougher and louder, with no better result.

This approach describes American policy toward North Korea. It would be better for Washington to say nothing than to frantically denounce every provocation. The United States and its allies typically respond with angry complaints and empty threats, which only encourages the Democratic People’s Republic of Korea to provoke again.

North Korea recently launched two missiles. One exploded shortly after launch, while the other landed about 160 miles from Japan. It was more of the same, barely worth a second thought.

However, UN Secretary-General Ban Ki-moon declared that he was “deeply troubled” by the North’s action. The United Nations Security Council met, at which there were “strong condemnations across the board,” according to U.S. ambassador Samantha Power.

South Korea’s UN representative, Oh Joon, denounced Pyongyang, contending that the latter’s missile program “is not only a grave challenge to the global nonproliferation system but also poses a clear and present danger to the security of all countries in the region.” Everyone, he added, had an interest in stopping “this dangerous series of provocations immediately.” The South Korean military warned that North Korea “directly and blatantly demonstrated its provocative ambition to target seaports and airfields across South Korea.”

Even NATO Secretary-General Jens Stoltenberg joined the chorus, taking the “North Atlantic” Treaty Organization way out of area. He declared that North Korea should “immediately cease and abandon all its existing nuclear and ballistic missile activities” and “refrain from any further provocative actions.”

It’s almost charming to think that Stoltenberg imagined his words would shame into repentance North Korea’s communist emperor Kim Jong-un, fresh from executing the managers of a Chinese restaurant whose staff had defected. How very Norwegian of Stoltenberg.

Alas, the rebuke from the Pentagon, which positions nearly thirty thousand troops in South Korea, was even less likely to cause Pyongyang to reverse course. Kim and his advisers seem far more likely to enjoy than regret Japanese ululations over the horrid threat posed by Tokyo’s former colony.

Just what do the allies believe they are achieving? Over the last five years the DPRK has shot off thirty-one missiles. Everyone violated a Security Council resolution. And each one was denounced in equally florid language.

None of the denunciations had slightest impact on the North’s behavior.

No doubt, Pyongyang has noticed that many of its chief critics and military antagonists deploy such missiles without apparent shame. The Security Council has strengthened sanctions over time, but so far the North can rely on People’s Republic of China to limit their worst impacts.

As for the tsunami of verbal criticism, the DPRK is far better at unleashing insults. The regime may be isolated, but remains unbowed. Indeed, Western whining plays to Kim’s worst instincts.

After all, the DPRK ably fills the role of a “shrimp among whales,” far smaller, poorer and less powerful than South Korea, let alone Japan, China and Russia. Yet the Kim dynasty has gained the world’s attention, causing wailing and gnashing of teeth in capitals across the world—and now even in the headquarters of NATO, the world’s greatest military alliance. From the regime’s standpoint, it obviously is doing something right.

In fact, despite the ill words which greeted its latest missile shots, observers predict that the North is preparing a fifth nuclear test. Pyongyang has dismissed American threats. Last month Foreign Minister Ri Yong-ho criticized the United States for its “never ending nuclear blackmails.” As a result, America “will have to pay dearly a terrifying price.”

Nor can Washington count on the PRC to “solve” the North Korea problem. After the latest DPRK provocations, Beijing’s ambassador to the UN, Liu Jieyi, chose not to focus on North Korea, but instead said, “the situation is tense and we need to do everything to de-escalate the situation.” He implied that the United States and its allies had provoked the North to arm, noting that “the factors contributing to the tension in the Korean peninsula” are “self-evident.”

Obviously neither North Korea’s neighbors nor anyone who imagines themselves in Pyongyang’s gunsights wants the DPRK to develop missiles or nuclear weapons. However, if the allies lack a means to disarm North Korea, they should stop wailing after every weapons test. Doing so reinforces North Korea’s inflated sense of importance and perception of allied weakness.

Better would be to greet such tests with silence. Any policy response, such as tightened sanctions, should be adopted with little rhetorical fanfare. Questions about the North’s tactics should be answered dismissively. The allies should react in ways which diminish the benefits to Pyongyang from confrontation. That wouldn’t make the North Korea problem go away. But it might at least stop encouraging the DPRK to do more.

No one knows how to push North Korea onto a more responsible path. But complaining and caterwauling after every Pyongyang provocation certainly won’t do so. The United States and its allies should give the North the attention that it truly deserves.

Doug Bandow is a Senior Fellow at the Cato Institute and a former Special Assistant to President Ronald Reagan. He is the author and editor of several books, including Tripwire: Korea and U.S. Foreign Policy in a Changed World.