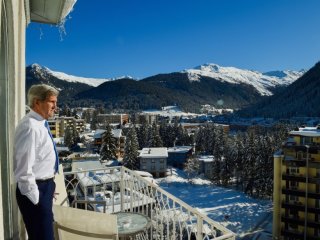 Admittedly, North Korean diplomats would have cut a curious figure in Davos, attending the just-ended World Economic Forum meeting. Representatives of one of the few regimes which still professes to be communist, they might have been forced to close their eyes amidst the capitalist excess highlighting the conference.

Still, the North Koreans would have seen much new. And there was the potential of what the Wall Street Journal termed “awkward encounters,” which might have allowed some informal diplomatic discussions on the side.

These, in turn, might have benefited Pyongyang’s neighbors and anyone else desiring that the Democratic People’s Republic of Korea learn the value of joining the “international community.” Alas, while the DPRK was invited to attend the forum, WEF rescinded the offer after the North’s latest nuclear test.

North Korea may be the most isolated state on the planet. Much of that is by choice. Founding dictator Kim Il-sung made the regime’s guiding philosophy “juche,” or self-reliance.

In fact, Pyongyang accepted assistance from both the Soviet Union and People’s Republic of China, but played them off against each other to maintain its independence. The North borrowed money internationally, later refusing to pay. The DPRK burned bridges in the Third World when it staged a bomb attack on visiting South Korean President Chun Doo-hwan in Burma in 1983. Since then the ruling Kim dynasty has successively engaged and rebuffed Japan, South Korea and the United States.

Nevertheless, Washington and its allies have made isolation their tool of choice in dealing with the North. Of course, frustration with Pyongyang is understandable—indeed, the most normal reaction to dealing with such a regime. Yet the policy has utterly failed. The DPRK has enshrined a unique form of monarchical communism, created an extraordinarily brutal system of domestic repression, maintained a large conventional military poised within reach of Seoul, and developed a growing nuclear arsenal. Something obviously ain’t working.

Kim Jong-un, who succeeded his father in December 2011, has not liberalized politically. To the contrary, he appears to have tightened controls, routinely executing top officials who displeased him—or perhaps threatened his rule. Moreover, he has continued the North’s missile and nuclear research. In doing so he has courted disfavor in Beijing as well as Washington.

Yet despite the difficulty still faced by foreign businesses, even Chinese, the DPRK is loosening economic controls. While much more needs to be done, Pyongyang’s commitment to reform appears real. Kim has promised higher living standards alongside nuclear weapons. That won’t be easy to achieve. But the more the regime could be tempted to sample heretofore forbidden economic fruits, the better. Just taste the apple from the tree of capitalism, Jong-un.

Which is where the World Economic Forum could have come in. It’s not clear that anything really useful happens in Davos. The rich and powerful preen before the rich and powerful. Self-importance fills the town along with delegates and journalists. The forum proclaimed that the annual gathering “remains the foremost creative force for engaging the world’s top leaders in collaborative activities focused on shaping the global, regional and industry agendas.” Indubitably.

Nevertheless, late last year the World Economic Forum invited the North for the first time since 1998, “in view of positive signs coming out of the country.” After Pyongyang’s January 6 nuclear test, however, the invitation was revoked since “under these circumstances there would be no opportunity for international dialogue.”

Actually, after the latest nuclear test was precisely the time when international dialogue was most required. For the fourth time Pyongyang defied the “international community” and tested a nuclear weapon. War would be a foolish response and sanctions have been applied without result. China is angry with its frenemy but unwilling to risk the regime’s collapse. So if not negotiation, then what?

The organization said it would welcome the North in the future if the latter “acts as a responsible and responsive member of the international community.” Yet the current challenge is convincing the DPRK to act that way. How without talking to Pyongyang?

The World Economic Forum could have included North Korea without giving it anything. Pyongyang’s attendance wouldn’t involve formal talks with U.S. officials. No money, food or energy would have been provided to the North as reward for coming. North Korea’s representatives wouldn’t even have been on the WEF program. Rather, the DPRK would have been present rather like the kid with his nose pressed up against the window looking inside a toy store.

Three successive U.S. presidents have insisted that the North cannot, must not, be allowed to become a nuclear power. Yet it has. Secretary of State John Kerry recently reiterated that Washington would never accept the DPRK as a nuclear power. But after Pyongyang’s latest test, the North Korean Foreign Ministry announced: “The U.S. should be accustomed to the status of the DPRK as a nuclear weapons state whether it likes it or not.” The North responded to years of isolation by simply forging ahead.

North Korea remains a seemingly intractable problem. Unfortunately, Washington’s drive to strengthen sanctions in the aftermath of the latest nuclear test won’t change anything. It’s time for Western officials to try something different.

While Kim Jong-un continues to pursue his country’s nuclear and missile programs, he appears to be more serious than his predecessors about economic change. If so, that provides the West with a bit of leverage. Inviting Pyongyang to Davos offered potential benefits at minimal cost. Show Pyongyang what could be. Maybe North Korean officials would want it bad enough to adjust their course.

Next year, include Kim and his cronies at Davos. The more time they spend looking talking in Switzerland, the less time they will have for making and deploying weapons in North Korea.