What Does America Gain by Arming Ukraine? 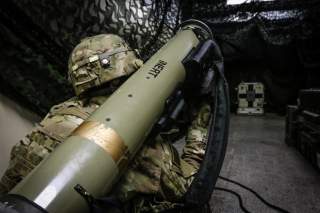 On March 1, the State Department authorized the sale of 210 Javelin anti-tank missiles to Ukraine. Sen. Joni Ernst (R-IA), a member of the Senate Armed Services Committee, applauded the sale because she said it shows the United States is “serious about protecting the interests of our nation,” and will help Kiev “push back against growing Russian aggression.” It is more likely, however, that this sale will accomplish the opposite.

The official press release from the Defense Security Cooperation Agency (DSCA) in regards to the sale claimed that the weapons “will contribute to the foreign policy and national security of the United States by improving the security of Ukraine.” Yet it is no small distinction to point out that Ukraine is not an ally of the United States, and we must question why improving their security is worth degrading our relations with a nuclear-armed Russia.

A military alliance is a commitment to another party that we will sacrifice American sons and daughters for their benefit. To make such a significant sacrifice, there must be a vital national interest at stake for America. As important, entering into an alliance requires that the other side be willing to sacrifice for our security, and that the ties result in a benefit to the United States. None of those factors exist in this case. The benefit is all to Kiev—and America absorbs risk without the potential for reward.

Not only will the sale of lethal arms not materially help Ukraine, but also it will likely increase Russian and separatist opposition, worsening the situation. A change in the methodology of how the government engages internationally is needed.

Whether in Ukraine or another international engagement, if an honest analysis reveals that the United States has merely a secondary or tertiary interest—rather than a core national interest—yet commits itself to expending valuable political or military capital, the chances are high that such engagement would end up costing more than would be gained. Why should Washington spend money and risk the lives of our troops for a mission that would leave the country at a net loss?

In the current standoff in the Ukraine, Washington would certainly prefer to see a peaceful resolution to the violence. For Moscow and Kiev, however, the matter is existential, meaning each is willing to expend considerable capital and take significant risks to resolve the conflict in their favor.

The 210 anti-tank missiles the State Department authorized is enough to equip four or five mechanized or infantry battalions for a short period of time. These missiles could provide a momentary tactical advantage, but strategically, the quantity is insufficient to tilt the balance of power with Russia and its allied forces.

In the latter stages of the Cold War, I was an officer in the 2nd Squadron, 2nd Armored Cavalry Regiment (2-2 ACR), a heavily armored unit composed of large numbers of tanks and armored infantry carriers. In 1991, 2-2 ACR was sent to Iraq to fight Saddam Hussein’s armored divisions, which had invaded Kuwait. At the Battle of 73 Easting, my squadron (a battalion-sized armored unit), fought against a brigade of an Iraqi armored division.

During that battle, three cavalry troops of 2nd ACR—approximately the size of one mechanized battalion—fired 125 tank rounds and eighty anti-tank missiles. In the span of less than six hours, one battalion-sized unit fired the equivalent of 38 percent of the entire missile sale to Ukraine.

Thus, no matter how it is billed in Washington, this sale will not “push back” against Russian aggression, nor is it in the “interests of our nation.” But while sending these missiles isn’t enough to tip the military balance in Ukraine, it is more than enough to convince Russia to increase its involvement.

Those missiles represent a clear increase in the risk to Russia and their proxy forces within eastern Ukraine because it signals that Washington may be willing to provide even greater lethal support to their opponent. It is therefore likely Moscow will take stronger action to counter the threat to discourage even greater American engagement.

This support could take the form of Putin sending more armor, anti-armor missiles of his own, more unofficial Russian troops, greater intelligence support for allied forces, or some other response that brings more violence and destruction to the Donbas region—the people we’re ostensibly trying to help.

It is reasonable and appropriate for the United States to promote the good of others abroad and to champion our values as an exemplar, a shining city on a hill. But we should only use, or threaten to use, military power when American security, economic prosperity, or our way of life are directly threatened.

Washington’s intention with the missile sale may be to increase the pain felt by Putin to drive him to a negotiated settlement, but the actual result will almost certainly be a further militarization of the situation and an increase in the potential for an expansion of the conflict. Far from improving American security, this sale will undermine it. Far from protecting Ukrainians, sending these missiles will place them at increasing risk.