What Does the Ceasefire in Syria Mean for U.S.-Russia Relations? 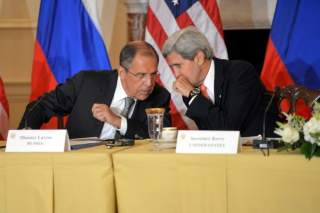 What could be defined as “successful” is relative: there is ample opportunity for obstacles to derail attempts at the cessation of military activity. First, the warring factions could use the ceasefire as an opportunity to rearm and regroup. Second, how the United States and Russia will convince their respective allies to abide by the terms of the ceasefire will be of concern. Finally, agreeing on who the common aggressor in Syria is will prove problematic.

Indeed, Washington and Moscow remain at odds on the future role of Syrian President Bashar al-Assad. Therefore, aside from finally providing a window of opportunity for humanitarian relief, what is the purpose behind the current ceasefire attempt, and the possible creation of an arena of cooperation for the U.S. and Russia which might ensue pending a successful ceasefire?

One possibility relates to Russia’s upcoming September 18th parliamentary elections. The timing of the ceasefire and, should it last for a week, the potential for joint U.S.-Russian military operations in Syria seems hardly coincidental given the timing of the Russian parliamentary elections, which were moved up from December to September amidst troubling domestic circumstances and the hugely volatile aftereffects of the parliamentary elections of 2011. Even taking into account the prevalence of state-sponsored media outlets, a record of murky electoral processes and the questionable reliability of approval rating and polling results, President Putin’s United Russia party remains relatively popular within the country. One reason is that one of the main foreign policy goals of the Putin administration is to regain a metaphorical “seat at the table” amongst world powers.

This foreign policy goal serves two key purposes. First, it promotes the foreign policy interests of those within Putin’s circle of elites, referred to as the siloviki. Second, it feeds into nationalist sentiments that the Putin administration has stoked. Moscow has been eager to dispel the embarrassment of the Yeltsin presidency and its broader marginalization internationally after the fall of the Soviet Union; regaining pride domestically and eminence abroad have been seen as the antidote. Thus, propping up Russia’s image as a global power and gaining a “seat at the table” amongst world leaders has been a foremost goal for the Putin administration, and for its vision of a re-emergent Russia. Success in that regard, whether attained by reasserting dominance over its traditional geographic sphere of influence or by aligning with other great or emergent global powers, translates into success domestically amongst Russian constituents. What it lacks in domestic political legitimacy, the Putin administration gains through a “successful” foreign policy.

The Putin administration does not want a repeat of the 2011 parliamentary elections’ aftermath, when thousands took to the streets to protest the results. With so many domestic concerns, and given the dodgy reputation of electoral processes in Russia, the Kremlin is well aware that the situation is ripe for a recurring set of mass protests following the upcoming parliamentary elections. Where Putin can, and historically has, gained legitimacy in the face of such varied domestic challenges has been in foreign policy. A “success” internationally, whether in Syria or elsewhere, would be a feather in Putin’s cap.

In Washington, meanwhile, the discussion regarding the future of U.S.-Russia relations is contentious, as the circumstances surrounding the possibility of U.S.-Russian accords remain fluid and unclear. Scholarly discussion and chatter within policy circles are, by and large, centered along a debate similar to the argument and counterargument recently featured in the Washington Post.  These exchanges, while differing on the minutia of the discussion, display agreement on the need to continue (or “ramp up”) economic sanctions, and maintain an enhanced military presence in the region to deter any further destabilizing attempts by Moscow. Also, dialogue or increased engagement is painted as somewhat futile, while areas of cooperation are considered limited.

The next U.S. presidential administration should, however, approach its policies toward Russia carefully. A careless approach could lead to a trajectory akin to a renewed Cold War, as recently pointed out by Russian Prime Minister—and former President—Dmitry Medvedev. In the United States, sentiment towards such a possibility vary and a generational gap can even be witnessed. Those who lived through the Cold War either abhor the idea of another such debacle, or distrust Moscow’s motives to such an extent that they view any attempt at establishing a positive trajectory in relations with Russia disdainfully.

Conversely, the foreign policy preferences of the millennial generation point to wariness toward aggression abroad, as highlighted by an insightful study by the Cato Institute. Millennials, which did not experience the realities of the Cold War first hand, has, by and large grown weary of prolonged, seemingly endless involvement in global conflicts in the absence of a clear and present danger to U.S. national security or a major international humanitarian crisis. That is understandable, considering that “millennials” have hardly experienced a time in which the United States has not been at war.

Where does that leave the United States in terms of its relations with Russia? Is a period of renewed Cold War or corollary conflicts paved in stone? Would the possibility of a unified U.S.-Russia front against common aggressors in Syria harken a new, more collaborative approach to U.S.-Russia relations? The next forty-eight hours, and the following week, will test the possibility of a serious accord between the United States and Russia.

Christine Guluzian is a post-doctoral visiting research fellow in Defense and Foreign Policy Studies at the Cato Institute.