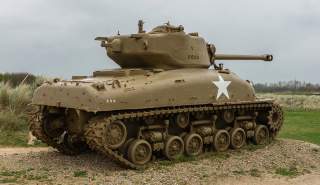 War, real war, is a horrific, brutish and destructive endeavor that rarely produces a genuine victor. It always inflicts egregious suffering, on all parties, and out of all proportion to the ostensible causes. One of the least examined aspects in the current age of major wars is its effects on military leaders and what they do in the name of their country. A look at some of the moral quandaries faced by the major commanders of World War II should serve as a sobering reminder to all who advocate solving complex international problems with military power.

The United States has not engaged in major combat operations against a foe capable of inflicting real damage to our forces since Korea and Vietnam; neither of those were on the scale of World War II. The lack of societal memory of the conduct and cost of major war is a contributing factor for the casual ease with which many opinion leaders in Washington advocate the application of lethal military power as a solution to any number of problems. It might be instructive to look back to some of the more complex situations facing an armed force conducting large-scale combat operations.

Since Seymour Hersh exposed the My Lai incident in Vietnam to the world, public opinion has been sharply focused on how Americans conduct combat operations as much as on what they achieve. Men like Medal of Honor winner Salvatore Giunta receive applause while the actions of certain Marines in Afghanistan receive condemnation for desecrating corpses of dead Taliban. That’s understandable and right. American citizens hold their soldiers to a high standard of conduct, even in bloody battles.

Many are fierce advocates for the laws of war, and believe that even in conflict, inhumane actions are immoral and out of bounds. Most Americans hold to the value of life and the dignity of man. But what happens when the vagaries of war throw such ideas into a sea of gray—or if adhering to ideas of such morality appear to lessen one’s chances of winning? That conceptual dilemma played out all too often, on all sides, in the harsh realities of World War II.

A barely comprehensible sixty million souls were lost during the Second World War. Many of the battles ground into savage affairs of attrition, where tactics and brilliant leadership counted for little. The matter was decided by which side was willing to sacrifice the most bodies to win the fight. At other times, leaders who had great compassion for their men ended up losing more of them, out of misplaced effort to protect them.

There were still other examples where generals needlessly sacrificed thousands when other tactics might have succeeded at less cost—or when the battle didn’t need to be fought at all. Such is the brutal, unforgiving nature of total war: what works brilliantly in one situation results in catastrophic failure in others. Below are representative examples of World War II leaders who won great battles because of a ruthless willingness to send thousands to their death, and a second set who employed the same concept but achieved little more than increasing the death toll.

In December 1944, most observers believed the war was almost over and that soon Germany would surrender. The United States and allies had come ashore at Normandy and by December had retaken most of France and the Netherlands. But Hitler ordered one last major offensive in the Ardennes area—what came to be known as the Battle of the Bulge—to try and split the allied forces and take the port city of Antwerp. His initial attack on December 16 caught the allies by complete surprise and made great progress.

The Germans amassed 250,000 troops for the attack and posed a serious threat to the U.S. war effort. To try and blunt the attack, Allied Supreme Commander Gen. Dwight Eisenhower needed someone to plug the gap. An entire U.S. infantry division, the 106th, had already been destroyed by the Germans. The only commander in the area was George Patton’s Third Army.

Patton was already in a winter fight south of the Ardennes. But he didn’t hesitate when called. The Third Army was already engaged in heavy fighting further south. His men, spearheaded by the Fourth Armored Division, were ordered to disengage from their current attack, wheel ninety degrees and begin attacking north towards Bastogne. They protested vehemently, but to no avail. Patton was ruthless in his insistence. He believed that the strategic needs of stopping the Germans at the Bulge was of greater importance than the cost to his men in Third Army.

The U.S. and Allied forces defeated the German thrust, which proved to be the final Nazi offensive of the war. Less than five months later, the war was over. But the move had proven costly.

The United States suffered nearly seventy-five thousand total casualties, its costliest battle of the entire war. Later, when explaining his apparent lack of concern for his troops’ welfare, Patton said, “Goddamnit, I’m not running for Shah of Persia. There are no practice games in life. It’s eat or be eaten, kill or be killed.” Many of those killed in the Battle of the Bulge were angry at what they considered Patton’s carelessness. But the attack did sap the Nazis of their final offensive strength, and within months, the war was over.

After taking the Gilbert and Marshall Islands in 1943, the United States continued its strategy of “island hopping,” whereby it would strip the Japanese of all the islands they occupied, with the ultimate objective of invading Japan itself. Key to that strategy was the small South Pacific island of Peleliu. In September 1944, the commander of the First Marine Division, Maj. Gen. William Rupertus, was ordered to make a beach landing there.

American strategists concluded that Peleliu had to be taken to protect Gen. Douglas MacArthur’s flank as he prepared naval and ground forces to recapture the Philippines. But the Japanese also recognized its importance. They had reinforced the island’s troops and built elaborate defenses. The terrain, however, strongly favored the defense. It was rocky, mountainous terrain beyond the beaches, which gave them commanding positions from which to rain down fire. Even if the Marines got off the beaches, they would then have to fight into the teeth of the rocky strongpoints. It proved to be a massacre.

One of the heroes of the Pacific war turned out to be then Col. Chesty Puller, one of the regimental commanders of Rupertus’s division. Yet even here his heroic actions were wasted. General Rupertus gave him orders that were subsequently described as suicidal. “The cold fact,” one officer was to later write, “is that Rupertus ordered Puller to assault impossible enemy positions daily till the [regiment] was decimated.” Some have suggested that the colonel should have protested, but that is not what Marines do in combat. They salute and do their best to accomplish the mission, however impossible it may seem. “It was more or less of a massacre,” Col. Puller later confessed. “There was no way to cut down losses and follow orders.”

One historian claimed that the general’s main problem was that of pride. “Rupertus knew how badly his division needed the Army’s help,” he wrote, yet “for days he refused to even consider this option. He was absolutely determined that his division would take Peleliu alone.” The Marines eventually defeated the Japanese on Peleliu, but at extraordinary cost. The assault proved to be the costliest attack in Marine Corps history. One battalion from Rupertus’s division had only seventy-four men remaining; the rest of the approximately seven hundred had been killed or wounded.

Prior to Patton’s drive to Bastogne and Rupertus’s push at Peleliu, there were those who thought the plans would succeed and others who warned of disaster. Prior to the execution of the mission, the outcome was unknowable. Imperfect men, fighting in chaotic battles, against opponents who want to kill them, can only do their best and hope for success. Even under the best of circumstances, however, soldiers are going to die.

In the comfort of living in a peaceful world where each action taken seventy years previously by U.S. commanders, it is easy—knowing how everything turned out—to critique their actions and assign fault where they failed. But that is the nature of war. Leaders must make life-and-death decisions with imperfect intelligence under unforgiving pressures. When nations send their armies into battle, even the most victorious side is going to make major mistakes that cost the lives of potentially hundreds of thousands of their citizens.

Before the United States presses too hard for war in the future, civilian leaders must weigh very carefully what they risk by keeping the sword sheathed—and the cost they will surely pay for drawing it.