What If Muslim Immigrants Don't Want to Be "Like Us"? 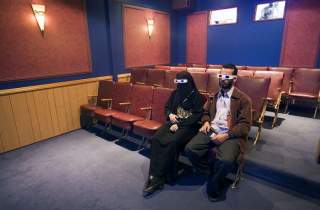 When they discuss immigration policy, especially when it applies to the influx of hundreds of thousands of Muslims to the West, pundits don’t necessarily exhibit a liberal bias, or for that matter, a left-leaning view of the world. How would John Locke, Adam Smith or Karl Marx respond to the current debate? My guess is as good as yours.

In fact, when they welcome immigrants, legal and illegal, from the Middle East and elsewhere, and blast the immigration restrictionists as bigots and racists, most Western policy intellectuals display what would commonly be described as the Whig interpretation of history.

According to Whig history, our societies have been moving in an almost linear fashion towards more advanced forms of enlightenment and liberty. Values like secularism, religious freedom, individual rights, women’s rights and free markets, representing the progressive future, were bound to overcome the reactionary forces of the past, represented by religious oppression, absolute monarchism, coercive government and backward-looking tradition, with liberal democracy being the culmination of this forward-looking process.

This view of the world derived in part from the ideas of the Reformation, which was seen as a central progressive force challenging the reactionary Catholic Church. So it was perhaps not surprising that while some of the leaders of the much-derided anti-immigration movement in nineteenth-century America known as the “Know-Nothings” were actually opposed to slavery, and supported extending more rights to women, they were also opposed to the immigration of Catholics into the country, believing that the followers of the pope and his illiberal traditions could end up halting the march towards progress.

The notion of a progressive or a liberal calling for restricting immigration would today sound mind-bending, if not a contradiction in terms. After all, notwithstanding the warnings from the Know-Nothings, the history of Catholic and, for that matter, Jewish immigration into the United States followed the Whig interpretation.

In fact, as political scientist Samuel Huntington put it, members of both religious groups as well as those of other non-Protestant branches followed the route of “Anglicizing” their religious practices and traditions and integrating themselves into the more secular and liberal environment of the country. They embraced what Huntington called the “American Creed,” which he regarded as the unique creation of a dissenting Protestant culture, with its commitment to individualism, equality and the rights to freedom of religion and opinion.

So from that perspective, the assimilation of these immigrants into American society could be integrated into a narrative of progress. They may have not been “like us” in terms of their view of the world when they had arrived into this country, which was why the Know-Nothings campaigned against them.

But then history proved that those who were opposed to the immigration of Catholics and Jews were wrong, playing the role of reactionaries in our forward-looking narrative. Today’s leading liberal pundits assign the role of villains to opponents of Muslim immigration, who are depicted as the modern-day Know-Nothings.

This Whig interpretation of history would recall how the children and grandchildren of Catholic immigrants from Ireland, Italy or Poland, and those of eastern European Jews, abandoned their parents’ and grandparents’ archaic religious traditions and sense of religious particularism and ethnic tribalism. They have, indeed, become very much “like us,” and in some cases, more committed to the progressive American creed than members of old Protestant families from New England.

So why should we assume that Muslim immigrants from the Middle East and South Asia wouldn’t play the same role in the sequel to that movie? Presumably the same economic, social and cultural pressures that eventually helped Anglicize the Catholics and the Jews in this country would do magic for today’s Muslim immigrants. And those who don’t share that expectations are part of the reactionary past: angry old white men who cannot come to terms with the changing demographics of the country.

But these upbeat expectations assume that many things that may be wrong, including scientific and economic progress, and other forces of modernization like industrialization and urbanization, are so powerful that they force one to leave the traditions of the past behind to embrace liberal and secular forms of identity.

But wait a minute. Why do things seem to be happening in reverse in the case of many young Muslim immigrants in Europe and the United States? Their grandmothers, growing up in the 1950s in, say, Alexandria, actually looked “like us,” wearing the latest European fashion and a spiffy swimsuit on the beach. It’s their granddaughters who are now wearing veils, the hijab and the burkini to make sure that they don’t look “like us.”

That many Muslim immigrants resist playing the role assigned to them in the forward-looking narrative may be explained, in part, by the backward turn taken by many Muslim societies where, as in the case of Turkey, the Whiggish interpretation has been turned on its head. As forces of modernization like industrialization and urbanization have accelerated, these societies have actually started shredding what remained of the secular and liberal values that were embraced by many during much of the twentieth century.

Hence the contrast between the dramatic transformation of Western societies during the age of globalization and postmodernism, where the debate has moved to a point where same-sex marriage is now the law of the land in several countries, and the trend towards more oppressive religious standards, intolerance and tribalism in the Muslim world.

So while the liberal West has been opening its doors to Muslim immigration, shrinking Christian communities in the Middle East are being decimated and its members, facing a radical Islamic assault, are forced to leave countries where their ancestors had resided before the Arab invasion.

Liberals who adhere to the Whig interpretation of history face a dilemma. They cannot accept the idea that many Muslims living in the West, not unlike members of the ultra-Orthodox Jewish communities in Israel and the United States, don’t want to be “like us,” and if anything detest the liberal and secular values that prevail in the United States and Europe.

Yet hanging to their liberal fantasy, policymakers and pundits accuse “Islamophobes” of wrecking progress and resist considering the inevitable: as these Muslim communities grow and expand, expect not only an end to same-sex marriage. Muslim citizens would then challenge other core principles of the Enlightenment, accusing bikini-wearing women of violating the changing standards of the community.

And as multiculturalism becomes a form of secular religion in the West, many liberals also try to deal with their cognitive dissonance by insisting on the preservation, if not the celebration, of regressive Muslim traditions, like the hijab. Liberal intellectuals, who spend much of their time denigrating evangelical Christians and warning of their plans to challenge the rights of women and gays, become apoplectic if someone dares to criticize Muslim traditions. Islamophobia!

Demonstrating the challenges liberals have in trying to keep their progressive narrative intact, Canada’s Prime Minister Justin Trudeau, a self-styled feminist and a leading global promoter of multiculturalism, appeared recently at a gender-segregated event in a mosque, singing the praise of Islam on the main floor where only men were permitted, while women were watching Trudeau from the balcony.

“Right now we have these political leaders — ironically, politically liberal leaders — who are just putting blinders on their eyes about their values,” Asra Nomani, a liberal Muslim, told Canada’s National Post. “That’s the big differential for liberals, they fancy themselves as honouring the women’s body and yet the segregation by its very definition hyper-sexualizes women’s bodies. That’s the great irony.”

Perhaps not such an irony. As liberals like Trudeau discover that Muslim immigrants are not ready to become “like us,” they conclude that they are left with only one choice: to become more like them.