What if North Korea Makes an Offer Trump Can’t Refuse? 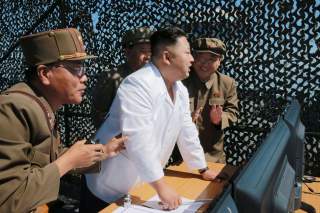 North Korea has just reminded the United States that it is intent on negotiating with the United States, not accepting an administration diktat, especially one explicitly modeled after the Libya deal, which ultimately ended in the gruesome death of Muammar el-Qaddafi, who agreed to its terms.

Secretary of State Mike Pompeo recently visited Pyongyang again and made Kim Jong-un an offer he hoped the North Korean supreme leader could not reject: abandon nuclear weapons and the North can “have all the opportunities your people so richly deserve.” But the Trump administration should be careful what it asks for. What if Kim said, “Yes, here are my nukes. Now where are my benefits?”

The summit between Kim and President Donald Trump is set but suddenly in doubt. Secretary Pompeo went to Pyongyang to finalize the details and bring home three imprisoned Americans. While there he made a pitch for North Korean disarmament. It sounded like a good deal, probably like the similar pitch to Qaddafi sounded in 2003.

Although most Korea-watchers expected an ever-so polite no from the Democratic People’s Republic of Korea, however disguised, at the summit rather than ahead of time, the most challenging answer would be a fulsome yes.

No one outside of Pyongyang knows the extent of North Korea’s nuclear program. Estimates of the number of weapons range from fifteen to sixty. Nor do American officials know where the weapons are located.

The so-called Children’s Palace is a venue for a variety of kid’s activities, and a must-stop spot for foreign visitors. I was taken there on both of my trips to North Korea, most recently last June. Dominating the building’s large open area is a model missile. At least, I assumed it was a model. The North might be hiding its weapons in plain view. How better to fool the Americans?

After the summit’s usual opening pleasantries have been exchanged, imagine Kim announcing that he sees no reason why two decisive men of action cannot quickly reach an agreement. To demonstrate his commitment to good relations with America he already released three U.S. citizens even though they had violated North Korean law. To further prove his good faith, he explains, at that very moment four North Korean nukes are on trucks just north of Panmunjom, ready for America to take if a deal is reached.

Of course, Kim continues, international inspectors would be free to visit, with all the usual caveats. To ensure parity, international inspections also would verify that no American nuclear weapons remain in South Korea. The two leaders’ minions can work out the details, Kim observes. For instance, a couple more nukes might be delivered after diplomatic relations are established, additional bombs could be turned over when sanctions are lifted, and so on. Now, with everything decided, time to break out the cognac, hold hands, and invite in the photographers.

How would President Trump respond?

Without knowing what weapons the North possessed, Washington would be flying blind. There would be widespread suspicion that the DPRK had more warheads than Kim said. But then what?

Declare that he is lying and refuse his proposal? Reject the proffered nukes? Admit that the president’s willingness to go to the summit was a mistake? This approach seems like a bad idea on many levels, not the least that it would be a very bad public-relations plan.

Insist on intrusive inspections first? Refuse to provide any benefits in the meantime, despite a dramatic, and positive, offer? What if inspectors can’t find any additional nukes, only those helpfully piled together by the authorities in a central location? After all, Kim might be telling the truth. And if not, then there are a lot of underground bunkers dug into a lot of mountains in the North. Even if errant documents or other evidence is discovered, how to resolve possible discrepancies?

If disagreement persists, then what? Blow up negotiations after the supreme leader offered everything Washington asked for? Explain to South Koreans why the United States was plunging the Korean peninsula back into a cold war? Tell the American people that war was back on the table, even absent hard proof that Kim was hiding much of his nuclear arsenal?

The easier path certainly would be for the United States to accept Kim’s offer as sufficient. Claiming denuclearization would allow the president’s partisans to continue to shout “Nobel!” Diminishing the North’s arsenal while foreclosing future developments would be a genuine achievement. Especially if the DPRK took other steps, such as reducing conventional forces, that suggested it was abandoning its own “hostile policy” toward the United States and South Korea. Surely Trump would recognize a win-win deal, at least in terms of politics.

Indeed, cheating might be inevitable given the DPRK’s security concerns. Frankly, Kim would be a fool to trust the United States after military intervention against Serbia, Afghanistan, Iraq, Libya, and Syria. After President Trump appointed aides who urged regime change in North Korea and other nations. After Washington refused to protect Ukraine once it gave up its nukes. After the administration tossed out the nuclear agreement with Iran and demanded new restrictions as well as concessions in other areas. Why should Kim believe anything Washington says to him about accepting his government and living in peace?

Moreover, China likely would accept such a deal. Beijing wants to keep a buffer state and prevent creation of a united Korea allied with the United States and hosting American troops. The People’s Republic of China also benefits from a heavily-armed DPRK which causes trouble for the United States. These objectives would be served if Washington and Seoul made deals with Pyongyang even though suspecting that the latter retained some nukes. Chinese officials have disliked the instability created by North Korea’s ostentatious nuclear and missile developments. However, if Kim adopted the Israeli approach—maintaining plausible deniability for everyone—constant verbal warfare and threats of real military action should cease.

In fact, this situation would well serve China’s interests. Just what did Kim and Xi talk about at their latest tete-a-tete, another surprise meeting, in Dalian, China? The People’s Republic of Cguba could offer enthusiastic support for Kim’s disarmament offer. Beijing might immediately relax sanctions enforcement to encourage Pyongyang to carry out its promises—and pressure the Trump administration to accept the deal. Would President Trump then turn on his Chinese “friend,” President Xi Jinping?

No one knows how the upcoming Kim-Trump summit (assuming it still occurs) will go. Kim never seemed likely to rush to dismantle his nuclear arsenal and repressive state. In which case the United States should expect the unexpected.

After all, as New Year’s dawned most people predicted more militaristic play-acting and confrontation with America by the DPRK. But in just four months Kim has transformed the region. He has gone from Stalinist caricature to charming statesman and forced South Korea, China and the United States to react to his initiatives.

There never was good reason to expect him to abandon the initiative when he meets with President Trump. The North’s latest eruption simply reinforces this point. Is the administration ready for an offer which it can’t refuse?