What Should China Think of Trump? 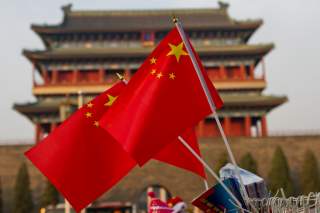 Like the rest of us, many people in and around Zhongnanhai must now be trying to work out what Donald Trump means for them. On economic matters, they may follow everyone else, including global stock markets, in apparently discounting Trump’s colorful threats to U.S.-China trade relations, and thus assuming that nothing much will change. Time alone will tell whether that is right or not.

But what of his approach to strategic policy? There, the consensus is harder to pick. They will recognize that for China, Trump is either a big problem or a great opportunity, depending on which of the contradictory elements of his campaign, and indeed of his personality, comes to the fore once he is in the Oval Office.

On the one hand, Trump’s isolationist “America First” posture, his belittlement of America’s key alliances, and the general impression he gives of being erratic and capricious all give Beijing grounds to hope that he will lack the inclination and resolve effectively to resist China’s challenge to U.S. primacy in Asia.

On the other hand, his occasionally pugnacious and belligerent comments, and the emerging conviction in Republican circles that Trump in office will pursue a hawkish foreign policy along orthodox Republican lines, suggest that the president-elect may prove a sterner and more difficult rival than his predecessor, or than Hillary Clinton would have been.

How they deal with Trump depends on which of these two possibilities they see as more likely. There is a good argument that China should expect the second of these possibilities, neatly set out by Harry Kazianis. But I think the stronger case can be made that they will make the opposite call, and expect the first—and for them more favorable—outcome. They will expect that, however tough Trump talks, he will not be willing to pay the costs and risks required to resist China’s challenge to U.S. leadership in Asia.

There are three reasons for them to think this way. First, they are confident that the “orthodox Republican hawk” model won’t work. That model is based on an assumption that America can quite easily impose heavy enough costs and risks on China to make China back off from its challenge to U.S. regional leadership. On this view, the only reason the Pivot hasn’t worked under President Obama is that he has not pushed hard enough. The Republican hawks now clamoring for Trump’s ear argue that if America just pushes a bit harder, all will be well.

But that assumption is based on assessments of China’s resolve which the Chinese don’t share. Chinese policymakers seem to be confident that the balance of resolve is in their favor. They believe they are more committed to asserting their leadership in Asia than America is to preserving the old status quo. They are probably right, because it is, after all, their backyard, not America’s.

That mattered less in times past when America enjoyed overwhelming military superiority in the Western Pacific. Back then, Washington’s ability to inflict more pain on China outweighed China’s willingness to accept more pain than America. Now, however, all that has changed. Republican hawks may boast that America remains militarily unbeatable, but the Chinese know that’s not true.

Their A2AD forces can inflict a lot of pain on America, and deny the United States any chance of a quick easy victory—and adding one hundred ships to the Navy won’t fix that. Everything about the way Beijing has behaved in recent years suggests it believes it can push Washington over the U.S. pain threshold before Washington can push Beijing over its own. The Chinese assess that if Washington turns more hawkish in Asia, they can prove more hawkish still.

The second reason for Chinese leaders to be confident that Trump will make life easy for them is that they have no good reason to believe that he really thinks like a Republican hawk. Nothing he has said or done hitherto suggests that he shares orthodox Republican assumptions about the need to sustain America’s global leadership and alliances at any cost.

Instead, he has a credible, if not yet clearly defined, vision of an America that defines its interests and responsibilities more narrowly than his predecessors have done, but that defends those interests more effectively. That’s what “America First” means. Regions remote from the Western Hemisphere can be left to look after themselves, as long as they don’t tread on American toes. That’s a vision of America’s international posture that China would find quite congenial—because it’s not unlike China’s vision of its own posture.

The third reason for them to be confident about dealing with Trump is the lesson of the 2016 campaign. American voters—on both sides of the aisle—have sent a resounding message that they do not buy the old policy orthodoxies, including the orthodoxies about U.S. global leadership. If Trump tries to act like a traditional Republican hawk, he will be deserting his base and weakening his position.

Indeed, in Beijing, they might well hope that Trump’s remarkable victory redraws the map of U.S. politics in ways that make it much easier for him to step back from U.S. leadership globally, and in Asia, in just the way China would like to see. Any orthodox Republican, like John McCain or Mitt Romney, would have found it immensely hard to square such a step with their own political and policy convictions. Any Democratic president might balk at the political fire they would draw from the Republicans.

But Donald Trump has no such worries. He has written his own rules, and his pugnacious “America First” rhetoric might well allow him to abrogate U.S. leadership in regions like Asia without looking weak at home.

All of these are good reasons for Beijing to be cautiously optimistic that Donald Trump’s presidency will provide a valuable strategic opportunity for China to build its new model of great-power relations in Asia, with China in charge.

But one hopes they will nonetheless approach him with caution, because there is something dangerously unpredictable about Trump. Indeed the risk as seen from China is not that Trump will be magically transformed into a steady, committed orthodox hawk, as many Republicans now hope. It is that, even while he pulls America back from Asia, he could still in a crisis react with his characteristic impulsive irresponsibility, launching strike operations the way he launches tweets with little thought of the consequences.

So if they are wise, China’s leaders will be very careful about how they test Donald Trump’s resolve. They will not want to move to soon, or too fast, to demonstrate how the mantle of regional leadership is shifting, to avoid creating confrontations in which Trump’s pugnacious instincts overcome get the better of his “America First” restraint.

If this is right, we can expect Beijing to give Trump plenty of room and time, to avoid dramas and to take only the thinnest slices of salami until they have his measure. But don’t be misled by that: from Zhongnanhai, Donald Trump is likely to look like very good news indeed.