What the World Can Learn from Colombia's FARC Deal 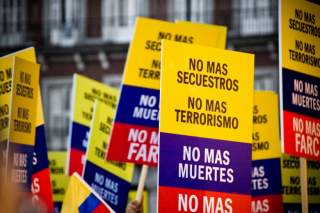 The world is a violent, awful, insecure and threatening place. That is the conclusion that one usually gets from events overseas: the wanton killing of civilians, unnecessary deaths from acts of terrorism, beheadings, car bombings, coups, purges and human-rights violations. A large swath of the world, from northeastern Nigeria through Pakistan, is either fully engaged in an armed conflict or is suffering from the kind of violence that goes above and beyond common criminality.

This is why the conclusion of the Colombian peace talks between the Colombian government of President Juan Manuel Santos and the Revolutionary Armed Forces of Colombia (FARC) is so refreshing: in a world where there appears to be nothing but conflict, hard-nosed and excruciatingly patient diplomacy can still pay off and result in a comprehensive peace accord.

The peace agreement with the FARC was four years in the making, and there were certainly speed bumps along the way. But with the official announcement last weekend that a bilateral cease-fire was put into effect and that the few remaining sticking points in the talks were finally worked through, fifty-two million Colombians will now hopefully begin a new era where civil war is no longer a part of daily life.

How did Colombia finally get out of this morass after half a century? There are three big explanations in my mind:

1. All sides wanted an agreement: In diplomacy, as in relationships, it takes two to tango. What that common expression means is that one side in an armed conflict cannot end a war through peace unless the other side (or sides, depending on which conflict we are discussing) is willing to embrace a similar path. Over fifty years of war between the Colombian government and the FARC rebel movement, when combined with the severe damage that the FARC has endured on the battlefield over the past decade, drove the combatants to an understanding that negotiation was the only way that the war could definitively end. Despite Bogota’s military operations against FARC leadership, Santos understood that the Colombian state could not quash the FARC insurgency through military means alone. The FARC, whose membership declined from twenty thousand in 2002 to roughly seven thousand today, saw the writing on the wall and came to the rational conclusion that they couldn’t achieve their political aims through wholesale violence and intimidation. The circumstances were perfect for a negotiation to occur—and the Colombian and FARC negotiators in Cuba showed the dexterity to arrive at creative solutions to get across the finish line.

2. Bipartisan U.S. support: The phrase “politics ends at the water’s edge” is not something that really holds water in Washington today. From the civil war in Syria and Iran’s nuclear program to Russia’s nuclear modernization, foreign-policy crises are more likely to be used as political talking points to bludgeon the other party than items that drive the parties together. In the case of Colombia, however, the phrase is true: through three U.S. administrations and nearly two decades, Republican or Democrat, the United States provided consistent military, economic and intelligence support to the Colombian government in its war against the FARC. Rather than obstruct and obfuscate, members of Congress backed up Presidents Clinton, Bush and Obama by appropriating billions of dollars towards Plan Colombia in order to improve the Colombian military’s counterinsurgency capabilities and enhance the state’s ability to take back swaths of the countryside previously claimed as part of FARC’s dominion. $10 billion went a long way in Colombia: violence this year is at its lowest since the early 1970s, and kidnappings are down by 90 percent from their peak in 2002. The country’s homicide rate has declined precipitously and the FARC suffered a significant rise in desertions. None of this was likely to occur (at least to this extent) without funding provided by solid bipartisan majorities in Congress.

3. Perseverance in the face of setback: Common sense would tell you that the longer a negotiation drags on, the greater the likelihood that something will go wrong to jeopardize it. This could have happened in Colombia, because there certainly were plenty of obstacles along the way. In November 2014, the FARC captured a Colombian general and held him in captivity, leading President Santos to suspend the negotiations until his man was released. Fortunately, the general was released a short while later.

When the negotiations were bogged down in the details of how a cease-fire would be implemented, Santos sent his brother to the delegation in an attempt to break the deadlock. And when ten Colombian soldiers were ambushed and killed in April 2015 and Santos responded by lifting the bombing pause against FARC positions, the violence was kept to a minimum and the clashes were called off months later—allowing the talks to continue despite the renewal of the shooting. Issues that were previously thought to be irreconcilable, like transitional justice and the role that the FARC would be given in Colombian politics, were tackled in innovative ways; instead of singling out the FARC as primary abusers of human rights, for instance, government soldiers and pro-government paramilitaries are also held accountable through the same judicial mechanism that FARC commanders and foot soldiers are subjected to.

Every armed conflict is different, but those negotiating in Syria, Yemen, and Ukraine may find it helpful to embrace the lessons of Colombia as their own. One can only hope that those conflicts won’t last a half-century before the combatants take the diplomatic way out.