What the 'World Police' Analogy Gets Wrong 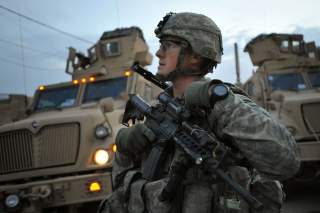 In late September, former NATO secretary general Anders Fogh Rasmussen wrote in the Wall Street Journal that the United States must embrace the role of global policeman “if freedom and prosperity are to prevail against the forces of oppression.” If success in this role and global stability are the goals, Mr. Rasmussen’s pleas must be thoroughly rejected.

His is only the most recent article advocating for greater U.S. military action abroad. On the eve of the 2003 U.S. invasion of Iraq, Max Boot and Jeane J. Kirkpatrick wrote that, like it or not, the United States had to fill the role of global policeman.

In the article, they rhetorically asked, “does the world need a constable? That is like asking whether London or New York needs a police force. As long as evil exists, someone will have to protect peaceful people from predators.” Writing in National Review ten years later, author Dennis Prager reinforced the metaphor of civil police forces when he postulated that if American mayors and city councils decided they didn’t want to police their cities, “We all know what would happen: the worst human beings would terrorize these cities and the loss of life would be far greater than before.”

He went on to warn that if America did not embrace the role of world’s policeman the result would be “catastrophe both for the world and America.” But is the absence of American military power abroad analogous to U.S. cities being without police forces? The argument collapses rapidly upon examination.

The comparison of the need for policemen on a city street to the need for U.S. military forces abroad is fatally flawed. Whether in New York or London, cities are policed by their fellow citizens, who are culturally, historically and linguistically similar. The laws enforced by those policemen have been proposed, debated, voted on and put into effect by legislators and executives whom the residents elected. In the United States and other democracies, if the people don’t like a law, they can change it via plebiscite, or by electing leaders who share their view and promise to change it. These peoples pay taxes to their civil government, which funds the officers who protect and serve their interests.

Imagine the inhabitants of New York City or Dallas, Texas—two cities fiercely proud of their character and heritage—would react if suddenly they were policed not by their neighbors but residents of Shanghai or Sebastopol, and held to laws designed and approved in China or Russia? The answer is clear. But the analogy of the police force to U.S. military also fails on more substantive matters.

If a person is arrested in a city, the police are required to prove in a court of law that the individual is guilty of the crime. The defendant is allowed to present evidence to prove their innocence and have a jury of their peers decide their guilt or innocence. If they are found guilty, the punishment is commensurate with the crime committed; death sentences are not handed down for parking violations.

The inhabitants of any civil entity want to be governed and secured by laws of their choosing, protected by people culturally and linguistically like themselves, and to have a judiciary to prevent abuse of power by the police force.

The world is given none of those things when the U.S. military is made to be its police force. If Americans would never, under any circumstances, submit to the laws and enforcers of another country on U.S. soil, why should we expect the citizens of other nations to submit to being made to obey our interpretation of laws by means of armed U.S. troops?

Dallas citizens can justly be concerned about the rampant murder toll in Chicago, but residents of the Windy City would not tolerate the Dallas Police Department unilaterally deploying to their city to restore peace. Likewise, the United States can be justly concerned about a civil war in a country and can provide humanitarian assistance, offer robust diplomatic resources and help the warring parties resolve their differences.

America should not, however, use its military power to support a party of its choice and kill those whom it does not favor, even if the withholding support for our preferred party results in those we don’t like eventually taking the reins of the government. Our military is obligated to defend our shores and airspace, and ensure that foreign violence or lawlessness do not cross our borders.

As many of the advocates of America as globo-cop have recently argued, some will say that with power comes responsibility, and the United States has an obligation for helping those weaker; to abandon them to the bullies is immoral and places our security at risk. Such arguments do tug at American hearts, which are generally inclined to helping those in need.

What needs to be a part of the America-as-global-cop argument, however, is an analysis of whether the application of their theories over the past few decades has helped. It doesn’t take long to discover it has not. To the contrary, there have been a few occasions when a neutral outcome resulted, but far more often our deployments have greatly worsened the situation into which they were injected. None in recent decades have restored peace.

• Iraq prior to our 2003 invasion was ruled by a despot who oppressed his population. But the version of Iraq today is a flaming disaster in which hundreds of thousands have been killed and peace is nowhere in sight.

• Afghanistan prior to our attacks in October 2001 was in a civil war, mostly contained within its borders. Our occupation succeeded only in seeing the rise of multiple terrorist groups and now the resurgence of the Taliban, which actually threatens the viability of the government in Kabul.

• Libya was ruled by a totalitarian leader who dominated his people up until 2011. American and allied bombing of the dictator’s regime resulted in his overthrow and death—yet that nation is currently embroiled in a deadly civil war in which two separate governments claim to be the legitimate ruling group.

• Syria, Pakistan, Yemen, Somalia and other lesser-known locations in Africa have for years wavered between instability and anarchy. The application of U.S. military power has served only to exacerbate the violence.

In not one of the above cases where the United States has exercised its so-called “moral obligation” to militarily intervene on behalf of the innocents in these lands have violence or war been resolved. To the contrary, all have worsened.

Our actual experience of performing the duty of the world’s policeman has universally failed. American national security has not been served and the plight of the helpless has markedly deteriorated. Is it not time to acknowledge this unbroken string of failures and consider alternative policies? Viable alternatives exist, but none are possible until we admit decades of America-as-policeman have failed.