What Was the Goal of Trump's Call with Taiwan? 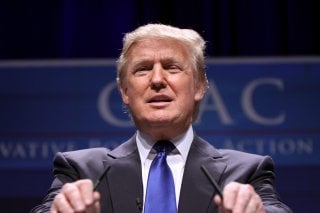 President-elect Donald Trump has received phone calls from numerous foreign leaders in the weeks since his upset election win, but none has attracted as much attention as the call from Taiwanese president Tsai Ing-wen. It was the first time since the United States transferred diplomatic recognition from Taipei to Beijing in 1979 that there has been any formal contact between the leaders of Taiwan and the United States. Moreover, the Trump transition team, in referring to the call, described Tsai not as president of the Republic of China (Taiwan’s formal, if thoroughly obsolete name) but as the president of Taiwan. That is a term not even Tsai claims. Instead, it is a favorite of hard-line elements within the governing Democratic Progressive Party (DPP) who wish to achieve formal independence for a Taiwanese state.

Needless to say, Trump’s decision to receive that call has generated considerable commentary. Members of the political and policy communities have weighed in with equal vehemence on opposite sides. To Taiwan’s avid supporters, especially conservative Republicans, such a gesture to a friendly, democratic de facto ally is long overdue. To those who instead worry about the impact on U.S.-China relations, it was another example of Donald Trump as a dangerous, unpredictable bull in America’s foreign-policy china shop.

There is also a widespread belief that the call signals a significant shift in U.S. policy, both on the Taiwan issue and in general U.S. policy toward China. But it is too early to reach such conclusions. There are at least three possible explanations for the way Tsai’s phone call was handled.

One possibility is that Trump and his handlers were unaware of Taiwan’s special, sensitive status and simply treated Tsai’s call as they did dozens of congratulatory missives from other foreign heads of state. Such an explanation would be exceedingly improbable with any other president-elect and any other transition team. In this case, though, the president-elect is exceptionally inexperienced in foreign affairs, not generally respectful of diplomatic nuances and not surrounded by experienced foreign-policy advisers who command his respect. It is still an unlikely explanation, but it cannot be ruled out.

A second possibility is that Trump is trying to adopt a hard line on Taiwan to throw Chinese leaders on the defensive and thereby gain important leverage on other bilateral issues. Throughout the campaign, for example, he made it very clear that he wanted better trade deals for American corporations, and that he believed Chinese negotiators had repeatedly outbargained their U.S. counterparts. Better agreements would validate Trump’s “America First” nationalist narrative. It would be useful for him if he could point to tangible steps, for example, to greatly widen the Chinese market for U.S. exports. It is a tad embarrassing that America’s principal export to China consists of soybeans. That is reminiscent of the role that agricultural societies usually play for more advanced industrial societies. It is possible that the president-elect might interpret the concept of some better deals as arrangements that also benefit the vast Trump business empire.

As the man who wrote The Art of the Deal, Donald Trump may well believe that even implicitly threatening to give Beijing problems on the Taiwan issue, which is so central to China, will induce Chinese leaders to compromise on topics important to the United States. In addition to trade and economic issues, there are at least two potential security matters that fall into that category. One is the South China Sea. At a minimum, the Trump administration will likely be looking for Beijing to scale back its vast territorial claims in that body of water.

The other major security issue where President Trump will probably want a change in Chinese policy is regarding North Korea’s nuclear program. The UN Security Council just imposed a new round of sanctions on Pyongyang—the latest installment in a policy that has proved its utter futility for decades. It would hardly be surprising if Trump and the national security team he builds will want China, the one country that does have significant influence over North Korea, to adopt a more robust, confrontational policy toward its wayward ally. Threatening to stir up the Taiwan issue might be seen as a way to galvanize Beijing to become more proactive regarding the North Korean problem.

The third possibility, though, is that President-elect Trump took the phone call not just to gain leverage over China, but to signal a dramatic change in U.S. policy toward Taiwan. It is an action that many conservatives have desired and advocated for years. Some stop short of advocating formal U.S. recognition of an independent Taiwan; others do not. Former U.S. ambassador to the United Nations John Bolton, a man being considered for a high policy post in the Trump administration, is a vocal member of the latter faction. There are likely other supporters of that position on the transition team.

That would be a perilous step, although there is some strategic logic for it. An independent Taiwan, closely allied with the United States, could become an air and naval bastion for U.S. forces, preventing China from projecting its military power out into the Pacific. It would serve a function similar to what Gibraltar did for the British in bottling up Spanish power. But not only would Tsai’s government have to be willing to incur the risks entailed in adopting that course, we would have to be confident that China would do little more than fume and protest.

The evidence suggests otherwise. Taiwan is strategically vital to China, and equally important, it is central to the core of Chinese national identity. There are growing signs that Beijing’s patience even with Taiwan’s continued resistance to political reunification is wearing thin. U.S. formal recognition of an independent Taiwan could easily push Chinese leaders over the edge into embracing the military option to compel reunification. Since under the 1979 Taiwan Relations Act, the United States has an implicit obligation to come to the island’s assistance under such circumstances, Chinese military action against Taiwan would be catastrophic for all concerned.

It is crucial that we gain greater clarity about the meaning and purpose of President-elect Trump’s decision to take President Tsai’s telephone call. Otherwise, the nervousness and speculation will only grow worse.