When Will China Realize Its Taiwan Strategy Failed? 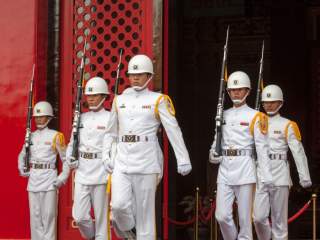 After nearly eight years of merciful quiescence, the Taiwan issue threatens again to become a source of dangerous turbulence. Angry demonstrations by young Taiwanese over the past year, charging that the government of lame-duck President Ma Ying-jeou has been too accommodating toward Beijing, is one prominent indication of trouble. The probable victory of the pro-independence Democratic Progressive Party nominee Tsai Ing-wen in next week’s election underscores the extent of dissatisfaction with the governing Kuomintang (KMT) Party. Recent polls show Tsai with more than a 20-point lead over KMT nominee Eric Chu. Moreover, for the first time in Taiwan’s history, there is a good chance that the DPP may not only win the presidency, but take control of the legislature as well.

And with an impeccable sense of inappropriate timing, the Obama administration chose this moment to approve a $1.83 billion arms sale to Taipei, over Beijing’s strenuous objections. The Taiwan issue is back as a major security dispute between China and the United States, joining such nasty controversies as the South China Sea territorial feuds and cyberespionage allegations.

If we are fortunate, Tsai will not follow in the footsteps of the last DPP president, Chen Shui-bian, and seek to provoke Beijing. There is a good chance that is the case. Tsai appears to be from the ‘pale green’ wing of the DPP—the more pragmatic faction. Pale green DPP types still hope to achieve formal independence for the island as the ideal final goal, but they are cautious about taking steps that might jeopardize the status quo of de facto independence. Chen came from the ‘deep green’ faction that sought to push the envelope on formal independence, even when that course entailed serious risks. Chen’s conduct not only enraged Beijing, it made Taiwan’s U.S. protectors more than a bit nervous.

In addition to the likelihood of Tsai’s more prudent temperament, the economic links between Taiwan and the mainland have grown dramatically under Ma Ying-jeou. Only the most rabid DPP partisans are willing to endanger those links and the benefits they have brought to the Taiwanese economy—including the largely pro-DPP agricultural sector.

No, the greater danger of a crisis now comes from the Chinese side. Beijing’s entire strategy during the Ma era was based on the assumption that drawing Taiwan into a web of ever closer economic ties would gradually lead to an erosion of support on the island for independence and an increase of receptivity to reunification. That simply has not happened. The Taiwanese have done a marvelous job of mental gymnastics in which they reconcile favoring closer economic ties with the mainland even as they utterly spurn any notion of political reunification. Polls consistently show meager support (often in the single digits) for becoming part of China. A key reason, of course, is that the mainland is ruled by a one-party state, whereas Taiwan is a vibrant, multiparty democracy.

But the roots of the reluctance go deeper. Except for a very brief period, 1945-1949, Taiwan has developed separately from the mainland, economically, politically, and culturally. It is a separate society in every meaningful sense of the term. Most Taiwanese have little desire to see their island become merely one small province in a vast, and largely alien, Chinese nation.

Just how futile Beijing’s strategy is of trying to neutralize pro-independence sentiment on Taiwan by increasing economic links between the island and the mainland can be gauged from recent polling data. Support for the DPP—and for a more assertive policy toward China—is strongest among young Taiwanese. We need to ask what happens when Chinese officials figure out that their entire Taiwan strategy is based on a faulty assumption and that there is almost no chance that they will ever get the island back peacefully.

It is more than a matter of academic interest to the United States. Under the 1979 Taiwan Relations Act, Washington is pledged to regard any coercive moves by Beijing against Taiwan as a grave breach of the peace of East Asia. We need to reexamine that commitment now, when there is not yet an acute crisis, and ask ourselves if, given the long-term geopolitical dynamics, it is a wise commitment in terms of America’s best interests. Mounting evidence suggests that being caught in the middle of a potentially bloody fight between Taiwan and the mainland is a growing danger. And it is a prospect that is definitely not in America’s best interests.

Ted Galen Carpenter, a senior fellow at the Cato Institute and a contributing editor at the National Interest, is the author of 10 books on international affairs, including America’s Coming War with China: A Collision Course over Taiwan (Palgrave Macmillan, 2006).