Who Is Responsible For Ending ISIS in Iraq? 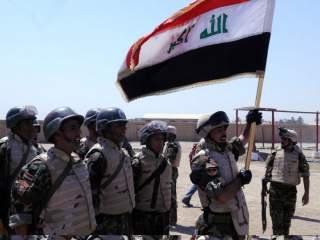 Early last week, Iraqi soldiers raised the red, white and black national flag over a government compound in the center of Ramadi, the capital of Iraq’s Anbar province. The city had fallen to Islamic State fighters in May 2015, and has been under ISIS control ever since.

The Wall Street Journal reported that “precise planning and constant coordination with the U.S.-led international coalition and local Sunni tribes tipped the balance on the battlefield.” Army Col. Steve Warren, a Pentagon spokesman, told the Washington Post that Sunni tribal fighters did not have much of a role in the offensive to retake Ramadi, but would begin providing security in the city center. Although Iraqi forces continue to encounter “pockets of resistance,” the recapture of Ramadi is certainly good news, and may signal a shift on the ground that will allow the Iraqi government to press on against other ISIS strongholds, including Fallujah and Mosul.

If you listen closely, however, you might notice a tinge of disappointment among some here in Washington. Few will be as blunt as James Poulos in The Week, who focused on “The Bad News about ISIS’s Defeat in Ramadi,” but the Iraqi government’s apparent success challenges some of the hawks’ most deeply held beliefs about U.S. foreign policy.

Their worldview hinges on the argument that Iraqis and others in the region can’t be trusted to take ownership of their security. Thus, the need for more U.S. troops in both Iraq and Syria. According to some, many more U.S. troops are required. The Iraqi government’s clear progress over the past few months seriously challenges the claim that the U.S. military is the only force capable of containing and ultimately defeating the Islamic State.

We've always known that ISIS has many enemies. Whether those enemies would fight them was in doubt. For a long time, they seemed to be waiting for Americans to do the fighting for them. And who can blame them? For decades, that has been the message that the U.S. government has been sending: our security guarantees reassure nervous allies. Our pledge to defend others discourages them from defending themselves.

This arrangement was always more delicate when dealing with Baghdad than Bonn/Berlin or Brussels, or Seoul or Tokyo. Unlike in Western Europe and East Asia, where the U.S. presence is welcomed, or at least tolerated, the Iraqi people quickly tired of the U.S. troops in their midst. This was not the troops’ fault—they conducted themselves as best as could be expected under difficult circumstances. But foreign troops on your soil always imply a measure of coercion, even when that coercion is subtle.

And the American version in Iraq wasn’t always. Unsurprisingly, relations between Washington and Baghdad have been consistently rocky. U.S. officials pressured Iraqis to restructure their political system and liberalize their economy. Many Iraqis resisted. Americans urged the Iraqi government to be more inclusive of religious and ethnic minorities, and, in particular, pushed Iraqi Shiites to reconcile with Sunnis, including former Baathists. Iraqi officials generally refused, and, at times, were complicit in the ethnic cleansing that raged in 2006 and 2007. U.S. officials circumvented the Iraqi government by working directly with some Sunni leaders in the fight against Al Qaeda in Iraq. Baghdad seethed. The U.S. government attempted to secure an agreement that would allow U.S. troops to remain in Iraq after 2011. The Iraqis refused. The United States extracted a promise from Iraqi leaders that they would protect those who participated in the Anbar Awakening. The Iraqi government reneged. The pattern of resistance, confrontation and defiance on the part of the Iraqi government calls into question the many claims that an extended U.S. military presence would have altered Iraqi politics and forestalled the rise of ISIS in the first place.

But we can’t replay history. ISIS exists. The open question is whether the Iraqi government, in particular, can keep up the momentum against this grave challenge to its authority. After the many hundreds of billions spent and the thousands of American lives lost to help build a post-Saddam government, it's well past the time for the Iraqis to prove they are deserving of these sacrifices, and willing and able to defend themselves.

Officials in the Obama administration, much as they might like to push back against their many critics, should not make this out as an American victory. While U.S. support helped, it is the Iraqis who deserve the credit for the hard fighting on the ground. And it is Iraqis who will likewise be chiefly responsible for removing the rest of the ISIS cancer from their territory.