Who Will Win the Contest for Trump's Iran Policy? 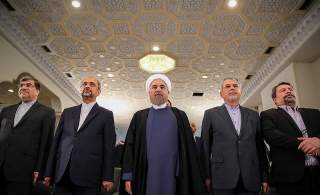 In roughly four weeks, President-elect Donald Trump will be sworn in and drop the “elect” from his title.

For foreign-policy hawks, a Trump administration could be the biggest opportunity in eight years for the United States to reassert itself around the world, correct the wrongs of the Barack Obama era, and re-embrace its role at the guarantor of global security. Some prominent members of the realist camp look at Donald Trump and see a man who understands the pitfalls, unintended consequences and financial drain of doing too much and taking on responsibilities far removed from America’s core security interests. And then there are the neoconservatives of the George W. Bush era, some of whom were so disturbed about the possibility of Trump winning the Republican nomination—let alone the presidency—that they signed a letter during the 2016 campaign calling on their fellow foreign-policy specialists to stay away from all things Trump.

Trump, in other words, is a lot of things to a lot of people.

Ditto to a large group commonly referred to as the “Iran hawks”: scholars, activists, think-tankers, former politicians and lawmakers in the U.S. Congress who have drilled home the message for decades that Tehran is the most dangerous national-security threat to the United States in the Middle East. Think of the American Enterprise Institute, the Foundation for Defense of Democracies, United Against Nuclear Iran, the Heritage Foundation and some corners of the Council on Foreign Relations, not to mention the vast majority of the House and Senate. It’s a large, powerful, influential and politically diverse group that isn’t waiting for Donald Trump to officially take the oath of office on January 20 before offering some advice.

Take former senator Joe Lieberman and former ambassador Mark Wallace’s op-ed in the Washington Post, titled “How Trump should renegotiate the Iran deal.” The title itself isn’t objectionable; even as a supporter of the Joint Comprehensive Plan of Action, I can admit that the agreement (like all diplomatic accords, by the way) has its share of flaws and weak provisions. Foremost in my mind is the inability of the deal to distinguish between major violations by the Iranians—restarting its uranium enrichment program wholesale or obstructing the IAEA’s inspection work across the country—from relatively minor nuisances like exceeding the cap on heavy water. The United States and its P5+1 allies have been unable to come to a definitive understanding about how to police these minor intrusions, a deficiency that has provided the Iranians with an ability to test the limitations of the accord and determine just how strongly the international community will push back.

But Lieberman and Wallace, like many of the opponents of the JCPOA, predictably take their recommendations a step too far . . . and then some.

The problem with the JCPOA in their minds isn’t just the fact that the Iranians will retain the uranium enrichment infrastructure to ramp up their programs after the deal’s most stringent restrictions expire after fifteen years (a legitimate concern for many of us), but that the Iranians are taking the United States for a ride by continuing to sponsor terrorism, repress the Iranian people, and improve Iran’s ballistic missile program at the same time as they are generally complying with the JCPOA. The United States, in other words, has failed, and is continuing to fail in holding Tehran accountability on other areas that are just as important as the nuclear file.

To Lieberman and Wallace, this is simply unacceptable of a superpower; the United States and its European and Arab partners, they write, “could address the policy omissions in the JCPOA by . . . securing an agreement with Iran to verifiably curb its regional aggression, state sponsorship of terrorism and domestic repression of human rights. In exchange, Iran could be given broad-based sanctions relief and even normalization of relations.”

The consequences for the Iranians if they refuse to accept this grand bargain? Easy: more economic sanctions on virtually every Iranian industry and sector imaginable, punishing some of the very companies that have been granted sanctions relief under the JCPOA, being far more aggressive on JCPOA enforcement, and even pushing Congress to pass an authorization for the use of military force against Iran that the Trump administration could use in order to take military action at a time of its choosing. And if the Iranians still don’t give in to the pressure? “Then it will be time, as the president-elect has said, to tear up this agreement.”

Lieberman and Wallace’s op-ed comes on top of legislative moves already being contemplated for the next Congress. At an event sponsored by United Against Nuclear Iran this month, the think-tankers and scholars who have always described the JCPOA as a colossal blunder are preparing for more Iranian sanctions bills in the hope that President Trump will get with the program. Speaking at the conference, Rep. Ileana Ros-Lehtinen was as blunt as she was giddy about the prospect of getting tougher on the Iranians: “I think we have an opportunity to undo a lot of the problematic concessions that we have seen over the past few years. And I. Can’t. Wait.”

President-elect Trump will be hearing a lot of suggestions regarding Iran and the nuclear agreement over the next several months. Indeed, a favorite line that Trump used during his own campaign rallies was crushing the JCPOA as one of the worst agreements that the United States has ever negotiated.

One hopes that Trump the pragmatist will have the insight and fortitude to separate the extreme recommendations that are designed to do nothing but create more animus between Washington and Tehran down the line, from suggestions that could actually improve the durability and success of the Iranian nuclear agreement. Just as important, however, one hopes that Trump has the strength to go against his own party on Capitol Hill when they inevitably pass sanctions packages that are motivated more by politics than by strategy.