Why America Can't Do What It Wants to Stop Assad 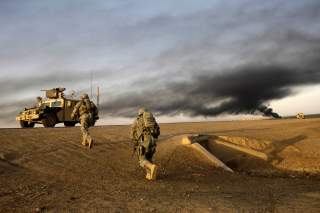 On Monday, an official at the State Department gave a public briefing in which disturbing new allegations of barbaric crimes against the Syrian regime were revealed. As public officials and public citizens react with appropriate outrage, it is possible that calls for new U.S. military action against Syrian dictator Bashar al-Assad will again surface. The administration must resist these calls for direct military action. As hard to believe as it is, the situation could get worse if we do—much worse.

Stuart Jones, acting assistant secretary for Near Eastern affairs, claimed that U.S. intelligence sources have discovered that the Syrian has installed a crematorium near a prison complex just north of the Syrian capital of Damascus, called Saydnaya. The purpose of the crematorium, he said, “is an effort to cover up the extent of mass murders taking place in Saydnaya prison.” The situation warrants special attention, Jones continued.

As horrific as many of the atrocities have been, they have remained confined within the boundaries of Syria. During his press briefing, Jones laid out in considerable detail many heinous acts committed by the Assad regime, noting that conservative estimates suggest as many as four hundred thousand people have been killed thus far during that war. What he did not address, beyond the single sentence quoted above, was an explanation of how he believes the regime poses a threat to the region, and more specifically, how Assad’s actions “directly threaten” U.S. security interests. These are not academic questions.

The 1973 War Powers Act was enacted to provide clarity for the conditions under which the armed forces may and may not be used. The United States is a nation governed by the rule of law, and when it comes to using lethal force abroad, emotions must be kept in check. Contrary to what many believe, the WPA does not grant the president the ability to use the military as he sees fit for sixty days without congressional approval. In particular, the act specifies that:

The constitutional powers of the President as Commander-in-Chief to introduce United States Armed Forces into hostilities, or into situations where imminent involvement in hostilities is clearly indicated by the circumstances, are exercised only pursuant to (1) a declaration of war, (2) specific statutory authorization, or (3) a national emergency created by attack upon the United States, its territories or possessions, or its armed forces.

To sum: unless a specific authorization for the use of military force (AUMF) against the sovereign state of Syria has been passed by Congress, an outright declaration of war has been passed, or Syria attacks the United States, the president may not use the U.S. military against Syria. If the American people believe that Assad’s brutal acts warrant a military attack, they may encourage their members of Congress to pass a specific AUMF to authorize such action. Before they do, however, there are a few critical pieces of additional evidence necessary to consider.

As bad as Syria’s dictator is, many of the opposition militia fighting against him in the civil war are directly allied with Al Qaeda. If American military power were to be used against Assad and he fell from power in much the same way Libya’s Qaddafi was thrown from power in 2011, some other group or coalition of organizations would take his place. Who are the contenders?

Jabhat al-Nusra is directly associated with Al Qaeda and shares a similar ideology. It is estimated to have twenty thousand fighters. The Free Syrian Army is more an exercise in marketing than an accurate title; it is more a loose affiliation of independent “brigades” than a unified and effective army. It is not only of limited military effectiveness, and like other rebel groups, it has also committed its fair share of atrocities against its enemies. Ahrar al-Sham also claims tens of thousands of followers, and is a Salafist Islamist hard-line group that desires to implement its own version of sharia.

In all likelihood, if Assad falls from power, these and many other groups would almost certainly begin fighting amongst themselves to be in charge of the successor regime. The intensity of the civil war would almost certainly intensify, resulting in more—possibly far more—civilian casualties and even more atrocities committed.

Moreover, Iran, Russia and Turkey are not likely to stand idly by in the event of Assad’s fall, as each would most probably support their favored faction, providing arms and ammunition to further fuel the violence. In that case, neither would the United States stand passively by, as there would no doubt be many calls from various members of Congress to provide lethal aid to America’s preferred groups. Amid all that regional chaos, the risk of great-power clashes rises, and as bad, it would be entirely possible that the successor to Assad’s secular regime proves to be a hard-line Islamist group. Then a threat to U.S. interests really would exist.

If the United States took action that ultimately led to the downfall of Assad, we would likely spawn the very outcome for which we claim to seek remedy: an increase in the civilian suffering and the expansion of the war beyond Syria’s borders, increasing the terrorist risk to the U.S. homeland. We must, therefore, resist the temptation to let our emotions lead us to violate the spirit and letter of our own law and avoid making a horrible situation even worse.