Why Arab States Have Failed 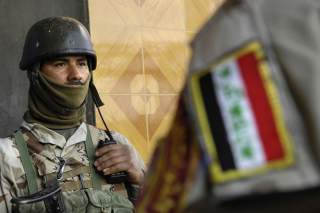 The recent killing of Abu Muhammad al-Adnani, ISIS’s propaganda chief, has been touted as a great success by the countries trying to decimate ISIS capabilities. It was seen as such a great achievement that both the United States and Russia claimed that their air attacks were responsible for his death. The forces ranged against ISIS—the United States, Turkey, the Iraqi government and Shia militias, the Syrian Kurds, Iran, and Russia—have also been chipping away at the territory controlled by ISIS despite the rifts and rivalries among them. According to one estimate, ISIS has lost a quarter of the territory it controlled at the zenith of its success.

However, denigrating ISIS’s capabilities and recapturing lost territory in Syria and Iraq will not solve the problem of anarchy and violence in these countries. The problem underlying the emergence of violent, transnational jihadi forces is the lack of state capacity in these countries. In other words, it is the failure of states to provide adequate security to their populations and to regulate intra-societal interactions in a predictable manner that has provided the space for groups such as Al Qaeda and ISIS to flourish in Iraq, Libya and Syria. These groups buy the loyalties of populations that they aspire to control by, among other things, invoking religious militancy. Furthermore, as the ISIS example demonstrates, they set up surrogate state structures to provide a degree of security to people willing to provide them with men and money, in exchange for protection.

The proliferation of sectarian and ethnic rivalries and conflicts in these states can also be traced to the same cause. For, when states fail to perform their primary task—namely, provide security to their populations—individuals and groups look for alternative protection rackets and security providers. Sectarian and ethnic entrepreneurs take over the functions of state agencies, and segments of the citizenry transfer loyalties and resources to them in exchange for protection and security. This also unleashes competition among sectarian and ethnic groups for the limited resources available, and eventually leads to the intensification of inter-sectarian and interethnic conflicts, if not all-out war.

The process of state failure in the Arab world, in its most recent phase, has its roots neither in the Quranic verses flaunted by the jihadis to justify violence nor in the 1,400-year-old history of the divide between the Sunni and Shia, which sectarian entrepreneurs use to justify antagonism toward the “other.” It owes its origins to the American invasion of Iraq in 2003, which was accompanied by a deliberate program aimed at destroying both military and civilian organs of the state, a project euphemistically called de-Baathification. The American invasion by decimating the Iraqi state also let loose forces of radicalism, extremism, jihadism—all interchangeable terms in the current political vocabulary, which are now blamed for the chaos and mayhem in the Middle East. It did so by creating a huge political vacuum into which extremist forces, some of them on the run from Afghanistan, moved in. Thus was created Al Qaeda in Iraq, led by Abu Musab al-Zarqawi, which after his death mutated into ISIS.

The vacuum created by the destruction of the Iraqi state was simultaneously filled by rival sectarian groups, and led to the intensification of Shia-Sunni conflict that had lain dormant for decades, if not centuries. The problem was exacerbated by the failure of the post-invasion Iraqi governments to act as neutral arbiters among rival sectarian groups, since these governments were mostly led by Shia sectarian entrepreneurs themselves. Consequently, most Sunnis completely lost faith in the state’s capacity to provide them protection. This spawned not only Sunni tribal militias, but also gave a new lease of life to the remnants of the discredited Baath party. More importantly, it led to the transfer of Sunni support to radical groups such as Al Qaeda in Iraq, and eventually to its successor ISIS.

Similar patterns became visible in Libya with the fall of the Qaddafi regime, and in Syria with the Assad regime’s loss of control over much of the country. In both cases, as in Iraq, foreign intervention was responsible to a significant degree for state collapse. In the case of Libya, NATO acted as the air arm of the anti-Qaddafi forces, providing the latter critical support that enabled it to overthrow the old regime and begin Libya’s downward spiral into anarchy. It is highly unlikely that Qaddafi would have been overthrown without NATO’s open support for the forces opposed to him. This was confirmed by no less a person than by then U.S. secretary of state Hillary Clinton, who, when informed of Qaddafi’s death, famously declared, “We came, we saw, he died.”

Syria’s story is similar, to a great extent. Foreign support for anti-Assad forces was critical in pushing out the regime from large parts of the country. But the inability of the externally supported opposition groups, both to deal a death blow to the Assad regime and to create viable state structures in portions of the country they controlled, added to the power vacuum created by the withdrawal of pro-Assad forces, thus clearing the way for the emergence of ISIS and its eventual declaration of a caliphate. The military stalemate in Syria also encouraged the involvement of regional powers—Saudi Arabia, Iran and Turkey—in the conflict in order to advance their own interests. It also drew in Russia and the United States on opposite sides of the civil war, thus exacerbating the anarchy and mayhem in the country. Syria thus became the primary arena for at least two Cold Wars in the Middle East, one between Iran and Saudi Arabia and the other between the United States and Russia.

It is true that Syria, Iraq, Libya and several other Arab countries suffered from state fragility and lack of unconditional regime legitimacy prior to foreign military intervention. However, the critical variable that pushed them across the line from state fragility to state collapse was foreign military intrusion. Left to their own devices, the peoples in these countries, I believe, would have over time either succeeded in changing their regimes through a process of autonomous revolt or, more likely, come to terms with the semi-authoritarian regimes that, as the history of western Europe teaches us, are essential during the early stages of state formation.

France would not have been France, and England would not have been England, had the Capetians and the Bourbons in the case of the former, and the Tudors in the case of the latter, not been able to impose order and a significant degree of homogeneity in terms of law, language and even religion on populations that were at least as diverse as, if not more than, the populations of Syria and Iraq. The French and English rulers also succeeded over a period of two or three centuries in erasing to a substantial extent the primordial identities of their subjects. In fact, they succeeded through myth-making and the creation of “historical” memories in convincing most of their populations that they had always been French and English, thus instilling in them a sense of national pride.

Looked at from this perspective, Syria, Iraq, Libya and several other Arab states established after World War I, despite their lack of  sectarian and ethnic homogeneity and their colonially crafted borders, do not appear to be very different from their European precursors at the beginning of their state-making odyssey. What is different is the era into which they were born, the lack of sufficient time for state building, and the existence of international norms that constrained their state-building efforts by expecting them to live up to standards of “civilized” behavior toward their populations, which no state in earlier epochs had to meet when at a corresponding stage of state making. One wonders how many European state makers would have succeeded in consolidating state identities and creating nations out of their diverse populations with the UN Human Rights Council and Amnesty International breathing down their necks.

What is critically different today, as compared to seventeenth- and eighteenth-century Europe, is that the early European state makers could engage in ruthless strategies of state making without significant danger of external intervention undertaken ostensibly to protect the human rights of their populations, a luxury that the Saddam, Qaddafi and Assad regimes did not possess. That such foreign intervention was primarily responsible for the decimation of the Iraqi, Libyan and Syrian states is now crystal clear. As stated earlier, the destruction of these states spawned the twin phenomena of violent jihadism, now represented by the ISIS, and sectarian militias and inter-sectarian conflicts that appear to be tearing these societies apart.

To reiterate, neither violent jihadism nor sectarian conflicts in their present form owe their origins, as is commonly assumed by many Western observers, to the doctrinal precepts of Islam or to the historical rifts within Islam going back fourteen hundred years. They have their origins in externally induced state failure in the Arab world. ISIS and other forms of violent extremism, as well as the Sunni-Shia conflict, as currently witnessed in the Middle East, are but epiphenomena. State failure induced by foreign intervention lies at the basis of the mayhem and anarchy we now see in the Arab world. ISIS and the sectarian militia are but secondary forces that have taken advantage of the decimation of state structures in the Arab world, thanks largely to foreign intervention for reasons mostly unrelated to the human rights of the Arab peoples, the reason ostensibly put forward for such interventions by major Western powers.