Why Are America’s Allies So Persistently Pathetic? 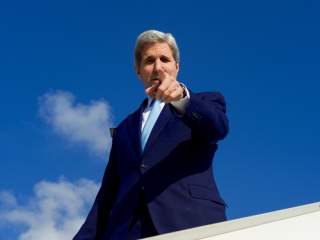 The United States is allied with every major industrialized power on the planet. America’s friends in Asia and Europe generally are prosperous and populous. Yet decades after the conflicts which led to Washington’s security guarantees for them, the allied gaggle remains a bunch of ‘losers,’ to paraphrase Donald Trump.

Last week North Korea staged its fourth nuclear test. Naturally, South Korea and Japan reacted in horror. But it was America which acted. The United States sent a Guam-based B-52 wandering across South Korean skies to remind Pyongyang—as if it needed reminding—that America’s military was on station. “This was a demonstration of the ironclad U.S. commitment to our allies in South Korea, in Japan, and to the defense of the American homeland,” opined Adm. Harry B. Harris, Jr., head of Pacific Command.

Unfortunately, the message might not work as intended. CNN’s Will Ripley reported from Pyongyang that “A lot of North Korean military commanders find U.S. bombers especially threatening, given the destruction here in Pyongyang during the Korean War, when much of the city was flattened.” Which sounds like giving the North another justification for building nuclear weapons.

Worse, though, reported Reuters: “The United States and its ally South Korea are in talks toward sending further strategic U.S assets to the Korean peninsula.” Weapons being considered include an aircraft carrier, B-2 bombers, F-22 stealth fighters and submarines. As always, America acts as the world’s 911 number. Call the United States and its forces will race in, sirens blaring.

A better response would be for Seoul to announce a major military build-up. Instead of relying on American charity, the Republic of Korea should boost its military outlays—which accounted for a paltry 2.4 percent of GDP in 2014, about one-tenth the estimated burden borne by the North. The ROK also could plan to expand its armed forces, from about 655,000 personnel today to a number much closer to the DPRK’s 1.2 million.

Doing so obviously would be a burden. But how much do South Koreans believe their nation to be worth? It has risen from the ruins of the Korean War to become a generally free and wealthy society. If the economic wreck to its north can create such a threatening military, why cannot the ROK, which enjoys a roughly 40-1 economic and 2-1 population advantage, meet the challenge? Of course it could. But Seoul won’t do so as long as it can rely on America’s defense dole. Why work if America will take care of you?

South Korea is not alone. Japan has been another long-term defense welfare client of the U.S. During the Cold War Tokyo capped its military outlays at about one percent of GDP, even when Washington was spending four or five times as much in order to defend Japan, among others. Only under Prime Minister Shinzo Abe has Japan begun to debate doing more, mostly because his government is no longer convinced that the U.S. will forever subsidize Japan’s defense.

Alas, the Europeans have not yet come to that conclusion. NATO sets a two percent of GDP standard for military outlays, yet the 2015 European member average was just 1.5 percent. Only four European states hit two percent: Estonia (on Russia’s border), Great Britain (barely, after originally planning to drop below), Greece (in a permanent conflict with fellow NATO member Turkey) and Poland (last year was the first time ever). Among the laggards: Latvia and Lithuania (complaining loudly about the “Russian threat”) and Turkey (creating its own “Russian threat” by shooting down a Russian plane in Syria).

Moscow’s aggressive behavior against Georgia and especially Ukraine set off all sorts of angst throughout Western and horror throughout Eastern Europe. Yet the standard presumption is that America should do more. U.S. officials and NATO leaders made their usual calls for members to hike military outlays, but most European states did what they usually do, continued to cut spending. At least Latvia and Lithuania, facing a potentially existential threat, stepped forward. They announced that they would. . . eventually get to two percent. But there was no need to hurry. One shouldn’t waste good money betting on them actually getting there.

Under normal circumstances European behavior would be mystifying. The European Union demonstrates the continent’s ability to overcome historic national divisions and collaborate for a common purpose. Collectively the Europeans enjoy around an 8-1 economic and 3-1 population advantage over Moscow. Even after its recent revival, Russia’s military today is a poor replica of that during the Soviet era.

Yet when Moscow acts against non-NATO members, Europe’s eyes turn to Washington for military relief. So, too, when the British and French wanted to wage a war to overthrow Libya’s Muammar el-Qaddafi. Instead of acting in their presumed interests, they pushed for U.S. involvement. When European states ran out of missiles for use against the third-rate Third World dictator, they again turned to America.

Washington’s allies generally are a pathetic lot. Benefiting from sizeable and capable populations and enjoying large and advanced economies, they nevertheless can’t be bothered to invest heavily in their own defense. At least the Saudis, who flout American interests by maintaining a veritable totalitarian state at home and promoting Islamic radicalism abroad, spend lavishly on their own military—$81 billion in 2014, which put them ahead of Russia.

When troubles arise U.S. friends expect the American cavalry, in the form of a B-52 in Korea this time, to arrive. Again, the Saudis at least act even if Washington does not, though often for the wrong reason, such as supporting Islamist extremists in Syria and raining death and destruction down on neighbor Yemen. Not America’s Asian and European dependents. As a result, the United States is expected to defend much of the globe. And the bulk of Washington’s outsized military outlays are to project power for the benefit of its ne’er-do-well allies rather than itself.

In the years ahead Washington should take a page from the Trump play-book and choose as allies a few 'winners,' nations whose friendship actually makes America more secure. The United States should stop treating national security as a form of welfare for other states.