Why Are State Sponsors of Terrorism Receiving U.S. Taxpayer Dollars? 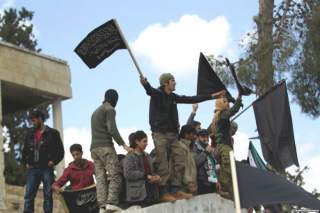 How a President Trump will approach relations with Russia — and especially what that means for U.S. policy in the Syrian civil war — has become one of the most discussed issues during a tumultuous transition. But we should be paying at least as much attention to what America’s putative partners — including those groups currently receiving U.S. taxpayer funding — are doing to prolong a brutal conflict that has claimed nearly 500 thousand lives, and driven more than ten million from their homes.

During the campaign, Trump even tangled with his running mate Mike Pence over Syria. When Pence suggested during the vice presidential debate that the United States institute a no-fly zone over Syria, Trump promptly swatted the idea away. “He and I haven’t spoken, and I disagree.” Late last week, Trump admitted that he “had an opposite view of many people regarding Syria,” and suggested that he would withdraw support for anti-Assad rebels, and focus on fighting ISIS.

Members of the GOP foreign policy establishment, however, are doubling down on the status quo.

On Tuesday, in one of the first post-election warning shots fired across Team Trump’s bow, Senator John McCain warned the president-elect not to trust “a former KGB agent who has plunged his country into tyranny, murdered his political opponents, invaded his neighbors, threatened America’s allies and attempted to undermine America’s elections.”

“At the very least, the price of another ‘reset’ would be complicity in Putin and Assad’s butchery of the Syrian people.

“That is an unacceptable price for a great nation. When America has been at its greatest, it is when we have stood on the side [of] those fighting tyranny,” McCain added. “That is where we must stand again.”

Alas, finding those who are “fighting tyranny” but not secretly committed to imposing it once they prevail is the tricky part. The abundant evidence from Afghanistan, Iraq and Libya — not to mention the Cold War — shows that legitimate freedom fighters are often indistinguishable from charlatans and thugs. Despite this unhappy track record, McCain retains his childlike optimism in the United States’ ability to find the “good guys” and help them to reshape fractured foreign polities.

Few Americans are so inclined. President Obama was caught between wanting to see Bashar al-Assad’s regime overthrown, but not wanting to see violent extremists take its place, for example, Jabhat Fatah al-Sham (Conquest of Syria Front), the one-time Al Qaeda affiliate formerly known as Jabhat al-Nusra. Unsurprisingly, the president’s efforts to arm the few factions that cleared the vetting process were an abject failure, in part because the tools available to protect the U.S.-approved anti-Assad factions are deeply problematic.

A no-fly zone, for example, may forestall the complete annihilation of certain groups, but only at the risk of widening the war. Since Assad’s Russian ally is also operating from time-to-time in Syrian airspace, a no-fly zone would necessarily threaten Russian planes and pilots. And U.S. planes and pilots would also be at risk. At a meeting of the Council on Foreign Relations last month, National Intelligence Director James Clapper told CBS's Charlie Rose, “I wouldn't put it past them to shoot down an American aircraft.”

Some in Congress have pushed back against the executive branch’s occasional zeal for intervention in Syria. In the late summer and fall of 2013, members of Congress were flooded with phone calls urging them to block U.S. military action there. Obama got the message too, and backed away from his ill-advised red line that would have entailed direct U.S. military action in the civil war.

But the Obama administration continued to funnel money to some anti-Assad rebels. Since then, a few in Congress have tried to cut off funds for the so-called “Syrian Train and Equip” program. An amendment to the Defense Appropriations Bill sponsored by Reps. Tulsi Gabbard (D-HI) and Austin Scott (R-GA) garnered 135 votes from both Republicans and Democrats, despite opposition from party leaders and the White House. It is reasonable to believe that a similar effort would fare even better in the post-election environment.

For now, U.S. law bars the federal government from providing support to terrorist organizations, but the United States’ putative allies and de facto clients operate under a very different set of rules. They have been fueling the civil war by plowing money and material support to a host of organizations that couldn’t survive the U.S. government’s vetting processes. In other words, other countries, some of whom are recipients of U.S. foreign assistance, are funding terrorist organizations, including ISIS. We might even call them state sponsors of terrorism. And, in any other context, that fact alone would and should disqualify them from receiving U.S. taxpayer dollars.