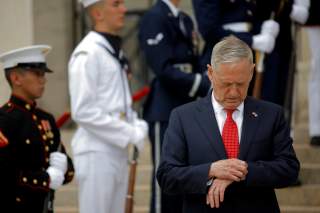 There is a dispute brewing between House Armed Service Committee (HASC) Chairman Mac Thornberry (R-TX) and others in the House, versus John McCain (R-AZ) and Jack Reed (D-RI), the leaders of the Senate Armed Services Committee (SASC). At issue is the need for a new Base Realignment and Closure (BRAC) round. The HASC version of the National Defense Authorization Act (NDAA) explicitly prohibits the Pentagon from carrying out a new BRAC. An amendment to the SASC NDAA, drafted by McCain and Reed, would allow for one.

There are some modest signs that opposition to BRAC is softening in both houses of Congress. When Rep. Beto O’Rourke (D-TX) attempted to amend the BRAC-less NDAA last year, he garnered just 157 votes. Rep. Tom McClintock (R-CA) fared slightly better this year. His amendment, which would have stripped the BRAC prohibition from the NDAA, failed 175 to 248, but nineteen HASC members, including ranking member Adam Smith (D-WA), voted for BRAC. And Republicans were far more likely to support BRAC than last year (ninety-five ayes, vs. thirty for O’Rourke’s amendment). Heritage Action had urged passage of the McClintock amendment, and that probably helped, as did the fact that it’s now a Republican administration asking for a BRAC.

There is still a ways to go, however, and it is up to the Senate to grant the Pentagon the authority it has been requesting for years.

Chairman Thornberry continues to argue that the Pentagon can’t be trusted to assess what its infrastructure needs actually are. A “BRAC Facts” one-pager issued last week to discourage House members from voting on the McClintock amendment implied that Secretary of Defense James Mattis wasn’t sure about whether his department had more property than it needs.

But this really isn’t in dispute, and the HASC’s selective quoting of Secretary Mattis shouldn’t obscure this fact. Mattis believes strongly in the need for a BRAC, as do other Pentagon officials.

On Wednesday, for example, Lucian Niemeyer, Donald Trump’s nominee for assistant secretary of defense (ASD) for energy, installations and environment, reiterated the administration’s commitment to BRAC: “The department needs the ability to optimize bases, realign forces and add new capabilities within a process that prioritizes military value defined by a national military strategy.”

The other objection to a new BRAC round is that the United States can’t afford it. The up-front costs of implementing a BRAC, opponents argue, will not be offset soon enough to justify the expenditures. This is also incorrect, but could certainly be addressed in legislation. The McCain and Reed amendment, for example, specifically caps implementation costs at $5 billion, requires that the round will generate net savings in seven years, and prohibits the inclusion of any individual facility that cannot demonstrate anticipated net savings within ten years.

The critical point to consider is whether the military must carry more than 20 percent excess inventory, or whether it could get by with merely 16 or 18 percent more than it needs. And if the Pentagon is correct, and it could safely relinquish underutilized facilities, that would save money.

But I think that the focus on the taxpayer savings, literally costs foregone, is too narrow. We should also be taking into consideration how underutilized facilities could be put to more productive uses by local communities.

In his SASC testimony Wednesday, Niemeyer highlighted the challenges facing defense communities in recent years, as the uncertainty of BRAC continues to hang over them. “Most are ready for the opportunity provided by BRAC to make their bases more efficient and effective,” Niemeyer explained.

And BRAC should be seen as an opportunity to boost economic growth, as has happened at Brunswick Landing in my home state of Maine. Jeffrey Jordan of the Midcoast Regional Redevelopment Authority showed me around on Friday. We sampled a delicious P-3 Pale Ale at the new Flight Deck Brewing, one of over 100 businesses located on the site of the former Brunswick Naval Air Station, closed under the 2005 BRAC round.

Jordan told me that Sen. Angus King had attended the ribbon cutting for Flight Deck Brewing in March. And we learned that Sen. King has also visited the online home furniture retailer Wayfair. Andrew Cantillo greeted us at the door of a modern facility that was once the Navy Exchange building. The facility employs 150, with plans to grow to 200 soon.

I also stopped at the former Pease Air Force Base in Portsmouth, New Hampshire, which closed in 1988. Pease International is now home to over 250 businesses employing nearly 9,600 people. A 2015 study of the economic impact of Pease’s closure found that “The Seacoast economy has outperformed the New Hampshire economy in both the short and long term, due in no small part to the success of Pease.” It also estimated that “the economy has added nearly 32,000 jobs since Pease closed.”

These and other cases are why I like to say that bases aren’t closed—they’re opened.

We should listen to Secretary Mattis: BRAC “is essential to improving our readiness by minimizing wasted resources and accommodating force adjustments.”

It is obvious, however, that the secretary needs some help making the case. I don’t believe that President Trump can be counted on to do it. As he discovered with the abortive effort to repeal the Affordable Care Act, threatening tweets aren’t enough to dislodge determined opposition to his legislative priorities.

Here’s an idea: we should encourage those senators who have seen successful base conversations in their states to help make the case to their skeptical colleagues. Senators Shaheen and Hassan of New Hampshire, for example, could boast about Portsmouth’s success. Or Senators King or Collins could invite people to join them for an adult beverage in Brunswick.

The possibilities are endless.

Image: U.S. Defense Secretary Jim Mattis looks at his watch as he waits for the arrival of Italian Defense Minister Roberta Pinotti at the Pentagon in Washington, U.S., July 11, 2017. REUTERS/Carlos Barria​