Why Erdogan Shouldn't Double Down on Dictatorship After the Coup Attempt 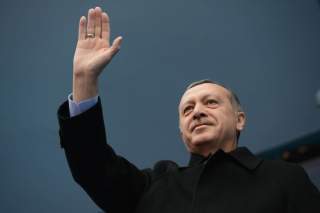 Turkey’s strategic importance to NATO and the United States cannot be underrated. It protects the easternmost flank of NATO, is a major conduit for Western arms aid to anti-Assad forces in Syria and until recently was held up as a model for the Muslim Middle East because of its apparent success in reconciling Islam with democracy. However, things have changed dramatically during the past year. Turkey has been the scene of major terrorist attacks in Ankara, Istanbul and elsewhere blamed on the ISIS and less frequently on a breakaway faction of the Kurdish PKK. The Kurdish insurgency has escalated, thanks to Ankara’s volte-face on negotiations for a peaceful settlement of the Kurdish demand for autonomy, and so has disproportionate and indiscriminate state repression of the Kurdish population in southeastern Turkey.

To add to all this, President Erdoğan’s authoritarian tendencies have increased in geometric progression since his election to the presidency in 2014 and, more particularly, since his party’s thumping victory in the parliamentary election of November 2015. He is bent on changing Turkey’s parliamentary constitution into a presidential one with an all-powerful president, free of most checks and balances, determining the future of country. He sees himself in that role at least until 2023 when he is determined to preside over the centenary celebrations of the founding of the Turkish Republic.

In the process, Erdoğan has either banned or overtaken newspapers, arrested journalists and academics who oppose him and purged the judiciary of independent minded judges. All this has ended up dividing Turkish society and alienating large segments of the population, both the secular Turks, and those affiliated to the powerful and secretive Islamist organization known as Hizmet, or more popularly, the Gulen movement.

This is the backdrop that seems to have encouraged sections among armed forces officers to attempt a putsch against the government. It is reported that most units involved in the endeavor belonged to the air force, the gendarmerie and the Second Army based in Malatya, that is tasked with protecting Turkey’s borders with Syria, Iraq and Iran. Although six generals have been arrested so far for their part in the failed coup, General Akin Ozturk, commander of the Air Force until his retirement last year and General Adem Huduti, commander of the Second Army, have been identified as the leading figures among the coup plotters.

It is still too early to say with any confidence what motivated them to attempt a coup at this time. The traditional explanation that the secular, Kemalist officer corps could not tolerate the creeping Islamization under Erdoğan and his AKP does not hold much water for two reasons. First, the most senior level of the armed forces sided firmly with the government and at their orders the loyalist elements within the army and air force fought off and subdued the rebels. Second, since 2002 the AKP government has succeeded in bringing the armed forces under civilian control and this has increasingly become the new culture within the armed forces. In fact, while the coup was going on, top military officers issued statements swearing allegiance to the democratically elected government thus signaling that the coup attempt did not have their blessing.

The explanation floated by Erdoğan and the AKP that it was the Gulenist elements within the armed forces that attempted the coup also cannot be taken at face value until the government comes up with credible evidence to prove the allegation. This is especially the case because Erdoğan has been using this theory to persuade the U.S. administration to extradite Fethullah Gulen, who lives in exile in rural Pennsylvania, to Turkey. Erdoğan’s government has been busy purging suspected Gulen sympathizers, once considered allies of the AKP, from the judiciary, the police and the administrative services for the past two years.

Connecting the attempted coup with the Gulen movement can, therefore, be interpreted as an attempt by Erdoğan to further discredit Gulen, who the President considers his nemesis, in the eyes of the Turkish people. While one cannot rule out the possibility that there may be Gulen sympathizers in the armed forces, it is unlikely that the officer corps has been infiltrated in such large numbers by the Islamist Hizmet given the highly secular character of the armed forces, especially its officer class, for them to plan and attempt a coup.

There are also several theories being posited as to why the putschists chose this moment to stage a coup. One plausible explanation is that they miscalculated the political atmosphere in the country and banked heavily on the support of political elements who have been sidelined or alienated by Erdoğan’s increasingly authoritarian proclivities. Here they were following an older script according to which at least some opposition elements would be willing to endorse the coup as they had done earlier in Turkey’s history in 1960, 1971 and 1980 because of their disenchantment with the ruling party. This would provide the fig leaf of legitimacy to the military’s overthrow of an elected government.

Unfortunately for them, this turned out to be a costly miscalculation. Politicians of all hues, including the secularists, the ultranationalists and even those fighting for Kurdish autonomy, joined in condemning the coup attempt and asking their followers to resist it. This demonstrated that Turkey’s political culture has changed tremendously during the past twenty years, and that Erdoğan’s most strident critics consider him a lesser evil when compared to rule by a military junta.

Another explanation is based on the theory that the senior officers among the coup plotters were already in the crosshairs of the government and would have been removed from their strategic positions next month at the meeting of the Supreme Military Council, which convenes every August to consider military appointments. This could well have been the case except that it still leaves unexplained why these officers were due for removal. Was it because they were suspected as Gulen sympathizers or as staunchly Kemalist and, therefore, viscerally anti-AKP? No answers have been provided so far.

But why did the coup fail? One obvious reason also referred to above was the fact that the military high command refused to endorse the coup and, in fact, actively opposed it. Consequently, the loyal military’s superior fire power could be used by the authorities to defeat the putschists. The police and the intelligence services also stood by the government and were utilized to bring the coup-makers to heel. This is a heartening development, because it clearly demonstrates a major transformation of Turkey’s political culture and the almost habitual acceptance on the part of the security services of civilian supremacy.

However, the course of events may still have gone in the opposite direction had it not been for the massive popular response to Erdoğan’s call for ordinary citizens to go out on the streets and confront the rebels, at considerable risk to themselves, especially at strategic points such as Taksim Square and the Bosphorus Bridge in Istanbul and Parliament House in Ankara. This was a clear signal not only to the putschists, but to the military high command as well that the people of Turkey, whether they liked Erdoğan or not, were willing to risk their all to prevent military rule. This was openly acknowledged by Chief of General Staff General Hulusi Akar in a written statement on July 17 in which he said, “The biggest role in preventing this treacherous act belongs to our honorable people.” The statement went on to say that many members of the public took to the streets to protect “the real members of the Turkish Armed Forces” and to foil the coup, which it said would have dealt a serious blow to Turkey’s democracy.

The popular demonstration of support for the elected government buttressed by the fact that all opposition parties, who have no love for Erdoğan and vociferously opposed the coup clearly sent the message that Turkish citizens and political actors of all hues were opposed to the coup attempt and firmly wedded to civilian rule. Now, it is up to President Erdoğan to determine what lessons he draws from this episode. He can become more paranoid, as most analysts expect, and use even harsher measures against all opponents whether connected with the coup or not and thus continue down the road to increased authoritarianism.

Alternatively, he can learn the real lesson of this tragic affair which is that the Turkish people’s commitment to democracy cuts across party lines and that he owes an immense debt of gratitude to all opposition parties who stood by his government during its darkest hour, when its future hung in the balance. If he draws the latter lesson it will help to curb his authoritarian tendencies, reduce his political vindictiveness, give up the dream of an all-powerful presidency, obey the rule of law and leave his mark as the “great democratizer” in Turkish history. If he does not, then next time, sooner rather than later, the “people’s power” may well turn against him. If that happens, even the armed forces, who must also have drawn their own lessons from this episode, will not come to his rescue.