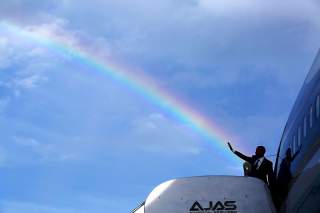 Poor President Obama. The forty-fourth president may have left office with high approval ratings, but his foreign-policy choices are still being disparaged by commentators from all sides of the political spectrum. Indeed, it’s hard to find a positive article reflecting on his foreign-policy legacy.

But despite some poor decisions and policy missteps made during his administration, we shouldn’t exaggerate the extent of Obama’s foreign-policy failures. Things could have been a lot worse.

Hawkish criticisms of Obama’s approach to foreign policy are certainly nothing new. Indeed, the largely incorrect assertion that Obama pursued a policy of “restraint” and “retrenchment” during his term has spawned a whole genre of articles arguing that the Obama years prove that a more restrained grand strategy cannot work, and mandate a return to a more activist foreign policy.

In these tellings, the Obama administration caused the rise of ISIS by removing troops from Iraq, “abandoned” Libya, “failed to moderate” the Syrian opposition and empowered aggressive states, from Russia to Iran to China. Though these criticisms are largely unjust—both Libya and Iraq were weakened more by the initial U.S. regime change than by any later “abandonment,” for example—to many hawks, Obama’s refusal to arm Ukraine and commit troops in Syria undermined U.S. alliances and standing in the world.

Yet it’s also easy to criticize Obama from the other side. For one thing, he didn’t really pursue a foreign policy of restraint. During his eight years in office, Obama escalated the “surge” in Afghanistan, intervened in Libya, backed a disastrous Saudi war in Yemen, dramatically increased the use of drone killings and opened several new fronts in the war on terror. Today, the United States is engaged in conflicts in at least half a dozen countries.

Nor does the world seem substantially safer or more stable than when Obama took office. With at least three active civil wars in the Middle East, the emergence of ISIS, a refugee crisis in the European Union and a looming Brexit, today’s world is perhaps not more dangerous, but certainly more complex and challenging than any time since the end of the Cold War.

But history is likely to be kinder, particularly in considering the extremely poor hand dealt to the president. Indeed, it’s almost hard to remember now that candidate Obama ran in 2008 primarily on domestic issues, promising economic relief from the worst recession in recent memory. Yet once in office, the legacy of the Bush years and a series of unpredictable crises—most notably the Arab Spring—forced him to engage with thorny foreign-policy issues on a daily basis.

At the same time, Obama’s foreign-policy legacy must be judged against plausible alternatives. Obama’s opponent in the 2012 election, Mitt Romney, advocated an Israeli strike on Iran’s nuclear facilities; the president’s crowning diplomatic achievement—a nuclear accord with Iran—was in no way perfect, but was infinitely preferable to either Israeli or U.S. military action to prevent nuclear proliferation.

Critics may argue that Obama allowed Syria to slip into crisis, yet the president repeatedly refused to intervene on the grounds that there was no credible policy proposal that would have prevented such an outcome. Likewise, in refusing to send lethal weapons to Kiev, Obama acknowledged the implausibility of a Ukrainian battlefield defeat of Russia. In doing so, he likely prevented the Russian-stoked conflict in eastern Ukraine from escalating further.

Indeed, the president’s coolheaded, rational and realistic decisionmaking style, though often criticized by proponents of “urgent action,” likely kept us out of other incipient crises. The biggest mistakes of Obama’s tenure—in particular, the Libya intervention—often appeared to arise when he ignored his own careful instincts and allowed himself to be swayed by more interventionist voices.

Ultimately, Obama’s foreign-policy legacy will be judged in comparison to his peers, particularly his successor. It’s hard to imagine a greater contrast in decisionmaking styles than that between Obama’s deliberative rationality and Trump’s reactive, hair-trigger approach to crises. With his cautious and noncommittal foreign-policy approach, Obama pleased no one. But we shouldn’t be too quick to describe his foreign-policy legacy as an abject failure: we may well miss him when he’s gone.