Why Hillary Clinton Will Be a Foreign-Policy Nightmare 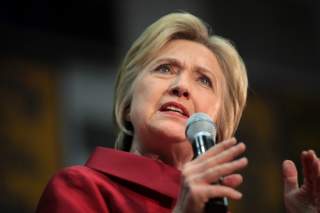 Imagine it is the morning of January 21st, 2017: President Hillary Clinton enters the Oval Office for her first daily briefing from the CIA. Without having to do much guessing we know that this briefing will be replete with terrible news about all the many fires burning around the world. The first priority, of course, will be the Islamic State (ISIS).

Unlike her predecessor, who appeared to have mixed feelings about the use of military force throughout his presidency, Clinton appears to have no such misgivings. Hillary Clinton was a dogged champion for military intervention as Secretary of State. As a candidate, she has been among the most hawkish Democrats in living memory, outdoing most of this year’s Republicans. She has repeatedly called for “an intensification and acceleration” of President Obama’s ISIS strategy.

As president, Clinton will face few obstacles in her desire to exert decisive leadership on the global stage. In the worst-case scenario, President Clinton, in pursuit of a muscular approach to confronting ISIS, will make three related decisions that doom American foreign policy to another decade of turmoil, casualties, and terrorism.

The first decision will be to send thousands of American ground troops to eradicate the Islamic State in Iraq and Syria. U.S. military leaders have made clear publicly that they believe that as many as 50,000 troops will be necessary to dig ISIS out of its strongholds in Syria and Iraq. A determined President Clinton who sends enough troops, planes, and tanks can certainly win the military campaign against ISIS. Even so, ISIS has had years to dig in. Given this and the dangers of urban warfare, the cost in American casualties will likely be significant. Further, ISIS could disperse its fighters among the general population, returning to either guerrilla or terrorist strategy. The United States was not able to prevent terrorist attacks in Iraq or the rise of ISIS after the invasion of Iraq in 2003. There is little reason to imagine it could do so under President Clinton in 2017 when conditions in Iraq are even worse.

Moreover, this time the fight is not limited to Iraq. ISIS presents an even greater challenge in many ways in Syria, where an expanded U.S. campaign will clash with Russian interests, which include supporting Assad against American-support rebel groups.

And let’s not forget the nascent ISIS foothold in Libya, the scene of Hillary Clinton’s greatest triumph as Secretary of State (and President Obama’s greatest self acknowledged foreign policy mistake). Libya suffers from a political situation heavily reminiscent of both Syria and Iraq, with multiple competing factions all battling for position to take power, operating under extreme duress thanks in part to the presence of the Islamic State. Any American intervention in Libya inevitably means favoring some factions over others, not to mention killing lots of Libyans, including civilians, all of which will add to the long list of people with grievances against the United States. Nonetheless, the signs suggest that the Obama administration is already preparing for another round of intervention. There is little reason to think that Clinton is not ready to approve it.

Clinton’s second ill-fated decision will be to attempt to restore and stabilize Iraq. Regardless of how well the military phase of the campaign goes Iraq, which is already a huge mess, will be in much worse shape afterwards. President Clinton, with the support of many Republicans in Congress, will argue that the only way to prevent ISIS from rising again is to help Iraq’s devastated society and economy to recover, which in turn will require a large and permanent military presence. The notion of stationing 50,000 troops in Iraq forever as the United States has done in South Korea is a horrendously costly prospect, and one that will likely have serious destabilizing effects on the rest of the Middle East. But Iraq is not South Korea; the U.S. cannot expect to spend fifty or sixty peaceful years watching over Iraq. The military victory will have done absolutely nothing to resolve the fundamental sectarian and political conflicts that have riven Iraq since the fall of Saddam Hussein. Nor will the victory have made the U.S. any more capable of fostering stability and democracy. Beyond this we cannot forget that ISIS itself grew out of the chaos that followed the 2003 invasion. It seems safe to assume that another intervention would raise, not lower, the risks of future terrorist attacks against the United States and its allies.

The third decision President Clinton will make is to reverse President Obama’s plan to draw down the U.S. military presence in Afghanistan, where the Taliban now controls more territory than at any point since 2001. The rationale for more aggressive action in Afghanistan will echo the rationale for taking on ISIS in Syria and Iraq. As Clinton said on the campaign trail, “We have invested a lot of blood and a lot of treasure in trying to help that country and we can’t afford for it to become an outpost of the Taliban and [Islamic State] one more time, threatening us, threatening the larger world.”

And yet, as with Iraq, all the evidence indicates that a more aggressive military campaign will fail for all the same reasons the policy has failed thus far. Despite 2,300 American casualties and roughly a trillion dollars spent in Afghanistan to date, fifteen years of intense effort has resulted in a country still unable to survive without life support. The simple fact is that Afghanistan’s fractured society and almost non-existent economy are incapable of providing the necessary counterweight to the Taliban. The result is that the costs of such an operation would far outweigh the benefits.

How likely is this nightmare scenario? All three decisions are entirely plausible given the decisions made by the previous two presidents. Hillary Clinton’s own behavior as Secretary of State and her comments on the campaign trail only make them more so. That said, predicting the future is a tricky business. As concerned as Americans are about ISIS, they are also tired of war in the Middle East and sending troops to the desert carries enormous political risks for any president. It may turn out, then, that foreign policy under a new Clinton administration would be far more restrained than the worst-case scenario I have outlined here. But what if it isn’t? The costs for America in lives and treasure could be momentous.