Why Isn't Europe Preparing for a War with Russia? 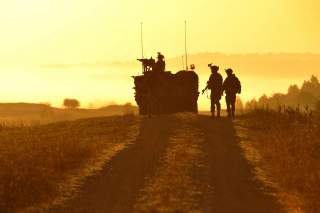 Three years ago the United States withdrew its combat units from Europe. Now it is sending them back, with regular rotations, to deter a Russian attack. Explained Brig. Gen. Timothy Daugherty: “Preparing for war is a lot cheaper than executing one.”

True. But why isn’t Europe doing the preparing?

During the Cold War the United States had about three hundred thousand troops in Europe. That number was down to 65,000 a couple years ago. Even so, that was too many: the continent long ago should have graduated from America’s defense dole. Yet the North Atlantic Treaty Organization had extended up to Russia’s borders and was threatening to add Georgia and Ukraine, former territories within the Russian Empire and the Soviet Union. From Moscow’s perspective, NATO continued to play the containment game, only up to Russia’s borders and into its former heartland.

Along the way Washington and Brussels dismantled Serbia with nary a consideration of Russia’s historic interests in the Balkans. The United States created relationships and gained bases—even in Central Asia. America’s policy looked to be the reverse of the infamous “Brezhnev Doctrine”: what’s mine is mine and what’s yours is negotiable.

Although the consensus in Washington long was to treat the Defense Department as a fount of international welfare, protecting prosperous and populous allies, candidate Donald Trump suggested a possible change when he criticized U.S. defense subsidies for the Europeans. Since taking office he has claimed credit for minor increases in European military outlays, but he has continued to sacrifice the interest of Americans for the benefit of European governments, which prefer to offload responsibility for their own defense

Many on the continent perceive no serious security threat: few, if any, Europeans imagine Russian legions sweeping through Europe to the Atlantic. And European governments, whether they worry or not, figure Washington will defend them. So why burden European taxpayers when the bill can be sent to America?

Why are Washington policymakers, and especially President Trump, so ready to make Americans bear that burden? Vladimir Putin is a nasty character. No surprise there. But the world is filled with unpleasant authoritarians. That doesn’t make them threats to America.

Despite the overwrought rhetoric that fills Washington, Moscow poses no meaningful military threat to the United States. Mucking around with the 2016 election was offensive, but Washington has done the same, only far more often in many more nations. The Trump administration should insist that Russia desist, while promising America that it will not make the same mistake again in the future.

The Russian Federation is the only nation with a comparable nuclear force, but to use it would guarantee destructive retaliation. Although Russia rebuilt its conventional forces after the Soviet Union’s collapse, Moscow is a serious regional, not global, power. Nothing suggests that Putin has the slightest interest in a confrontation with America.

Moreover, the United States and Russia have no substantial disagreement over important interests. Instead, the two governments have collided on peripheral issues—such as Syria (with which Moscow long was allied and which matters little to America) and Georgia/Ukraine (which are not important for U.S. security). In contrast, both America and Russia fear Islamic terrorism, oppose a nuclear Iran and North Korea, and face a potentially aggressive China.

Yet Washington is putting American troops back in Europe. Army Chief of Staff Gen. Mark Milley said that “We, the U.S. Army, think that additional capability is probably needed” to deter Russia. U.S. Army Europe commander Lt. Gen. Ben Hodges declared that “We’re going to do this as long as it is necessary.” There is, he added, “no off-ramp in the future.”

What are the Europeans doing about Russia? They are, well, busy. Or perhaps feel that they already gave at the office.

Europe currently spends twice as much on the armed forces as Russia. If Europe’s governments aren’t spending effectively, then they need to fix that rather than expect Washington to again step in. And they could do much more if they felt threatened. General Hodges lauded Lithuania for devoting 2.07 percent of GDP on the military, but if that government is nervously awaiting the arrival of Russian tank divisions, then it should double or triple its outlays. The point is not to defeat Moscow’s legions, but to ensure that any attack would be costly and not worth the price.

So, too, Estonia, Latvia and Poland. They all seem to crave American garrisons. What they should receive are contingents from their European neighbors.

But move away from the border states and most Europeans are too busy to bother much with military matters. Germany’s outlays went from 1.18 in 2016 to 1.22 percent this year, but are expected to drop back in 2018.

It’s fair to assume that no one in Germany, at least, expects the Bundeswehr to be in action. Even the Germans joke that the role of their soldiers is to stop the Russians until real military forces arrive. The likelihood of Germans heading east to save the Baltics, or Poland, or anyone else is minimal at best.

But then, who believes Italian, Spanish, Portuguese, Belgian, Danish, Montenegrin, Luxembourgian, Slovenian, Slovakian and Czech troops will make up a grand expeditionary force to push back jackbooted Putinistas? As once was said of Oakland, there’s no there there when it comes to most European militaries.

The problem is not inadequate resources. European nations collectively have a larger population and equivalent economy as America. Their military strength may lag behind that of America, but they are not helpless. On a power index France and the United Kingdom are next, followed by Turkey. Then come Germany and Italy. All of them could do much more if they desired.

And the Europeans have plenty of military manpower. Turkey alone has nearly four hundred thousand men under arms. Admittedly Ankara isn’t looking much like a loyal ally these days, but if not, then why is it still in NATO? In any case, Italy has some 250,000 citizens under arms. France has about 200,000, Germany has about 180,000, Greece has about 160,000 and the United Kingdom has more than 150,000. Spain has 124,000 citizens under arms. And they could expand their forces if they believed there was a security justification for doing so. Instead of the United States, these countries should be offering the extra combat brigades and a lot more to deter Russia.

More than seven decades after the close of World War II, the Western Europeans have recovered economically, overturned alien communist regimes, and absorbed Central and Eastern European states into the European project. Collectively they vastly outstrip the remains of the once fearsome Russian Empire and Soviet Union.

Moscow can beat up on a small neighbor, such as Georgia, but could not easily swallow Ukraine and certainly not conquer Europe. And if there is any doubt about the latter, the Europeans could accelerate militarily past what is a declining power facing economic stasis, demographic decline, and political crisis in upcoming years.

Uncle Sam is effectively bankrupt. It faces trillion-dollar deficits in coming years. Yet Congress refuses to make tough decisions, preferring to reduce revenues rather than address spending. As federal debt, social spending and foreign commitments collide, crisis is likely to force action. America’s promiscuously interventionist foreign policy is likely to suffer. Few American seniors will volunteer to sacrifice Medicare and Social Security to enable the Europeans to continue underwriting a generous welfare state. Better for Washington to make cutbacks thoughtfully and systematically, rather than frantically in the midst of a crisis.

The Europeans will never cease calling for increased U.S. military commitments, but U.S. officials could stop offering to pay. Washington should remain in NATO and other alliances only so long as they advance America’s security interests. Defending countries well able to protect themselves does not advance those interests.