Why Isn't There a Debate about America's Grand Strategy? 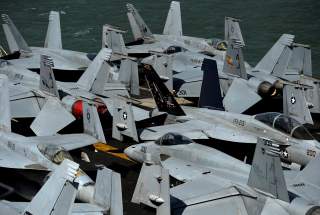 “The United States needs a new set of ideas and principles to justify its worthwhile international commitments, and curtail ineffective obligations where necessary,” argue Jeremi Suri and Benjamin Valentino, in the introduction to their edited volume Sustainable Security: Rethinking American National Security.

“Balancing our means and ends requires a deep reevaluation of U.S. strategy, as the choices made today will shape the direction of U.S. security policy for decades to come.”

Though rarely spelled out in such stark terms, this question would appear to be at the core of America’s grand strategy debate—if such a debate were actually occurring. We should ponder why it isn’t, and therefore why an arguably “unsustainable” strategy persists. (As the economist Herb Stein famously said, “If something cannot go on forever, it will stop.”)

I foresaw this problem not quite two years ago. “U.S. foreign policy is crippled,” I warned in testimony before the Senate Armed Services Committee:

by a dramatic disconnect between what Americans expect of it and what the nation’s leaders are giving them. If U.S. policymakers don’t address this gap, they risk pursuing a policy whose ends don’t match with the means the American people are willing to provide.

And I concluded as follows:

the military’s roles and missions are not handed down from heaven. They are not carved on stone tablets. They are a function of the nation’s grand strategy...

That strategy must take account of the resources that can be made available to execute it. Under primacy, in the current domestic political context, increasing the means entails telling the American people to accept cuts in popular domestic programs, higher taxes, or both, so that our allies can maintain their bloated domestic spending and neglect their defenses.

It seems unlikely that Americans will embrace such an approach. The best recourse, therefore, is to reconsider our global role, and bring the object of our foreign policy in line with the public’s wishes.

That hasn’t happened. Although public officials and thought leaders should frame strategy as a choice among competing ends (what we seek to achieve), and means (i.e. the resources that we are willing to apply to achieve them), they have stubbornly refused to do so. They have clung to the same strategic goals, and simply hoped that the obvious fiscal constraints would magically disappear.

Given his willingness to challenge the foreign policy establishment, Trump’s upset victory last year might have changed all that. But, so far, it hasn’t. Arguably, it’s gotten worse.

In a recent discussion at the Cato Institute, Valentino observed how the reaction to Trump’s victory had divided into two camps.

One side was gripped with utter horror. A vast array of policy insiders—on both the left and the right—were appalled by the mere suggestion that the United States would revisit any of its international obligations, or abandon long-time allies. Even Barack Obama, who defied the foreign policy establishment from time-to-time, urged the incoming president “to sustain the international order that's expanded steadily since the end of the Cold War.” “American leadership in this world really is indispensable,” Obama explained in a letter to his successor.

Another group of individuals was willing to entertain challenges to the status quo. Though largely appalled by Trump’s antics and rhetoric, they were cautiously optimistic that his rise would stimulate a long-overdue grand strategic debate.

Both sides were wrong. There has been neither a major retrenchment, nor even a debate over whether such a retrenchment is warranted or wise. In other words, Valentino noted, we seem headed for the worst of all worlds: status quo by default.

The window hasn’t closed on a serious strategic debate, but the ball is now in Congress’s hands. Alas, nearly everyone in Congress seems utterly disinterested.

Consider, for example, the stifling of any discussion surrounding a new Authorization for Use of Military Force (AUMF).

This week, Sen. Rand Paul (R-KY) threatened to bring the Senate to a crawl unless it debated a new AUMF, but very few other elected officials are prepared to challenge the president’s authority to wage perpetual war at will. Sen. John McCain went so far as to dismiss Paul’s call for an AUMF debate as a waste of his time.

There is a similar lack of interest in the House. Back in July, GOP leaders blocked Rep. Barbara Lee’s attempt to force an AUMF debate. Although Lee’s proposal won bipartisan support in the House Appropriations Committee, Speaker Paul Ryan’s office called it “an irresponsible measure” that “endangers our national security.”

Speaker Ryan, Senator McCain and others on Capitol Hill who don’t wish to debate the nation’s wars should understand that our military interventions are ineffective precisely because Congress—and therefore the public—is disengaged. The nation fights in many wars that, unlike Korea or Vietnam, don’t get tens of thousands of U.S. soldiers killed. But wars that aren’t worth fighting unless they are cheap and easy might not be worth fighting at all. Indeed, the unwillingness to expend resources on dubious foreign wars is a mark of the public’s collective common sense.

Meanwhile, to the extent that they don’t feel much pain, or suffer any apparent trade-offs, the vast majority of Americans who don’t serve in the military remain rationally ignorant of the wars that don’t obviously cost them anything. In short, the public doesn’t care because Congress has given them little reason to care.

And U.S. foreign policy proceeds as if on autopilot.