Why NATO Isn't a Threat to Russia 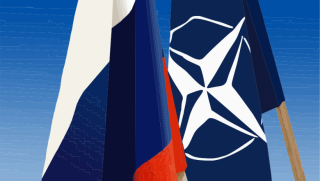 Russia’s apologists blame the United States for the recent deterioration of U.S.-Russia relations by arguing that if Washington had shown greater respect for Russia’s interests after the Cold War, Moscow would not have felt the need to safeguard its security by dismembering Ukraine and Georgia. The theory behind this realist view, articulated in part last week by Ted Galen Carpenter, is that Russia is too weak to threaten the United States as an expansionist power, so instead of extending NATO’s eastern frontiers and supporting the right of eastern European states to join alliances of their choosing, Washington should have backed off and respected Russia’s need for a “modest security zone” against “NATO’s increasingly menacing incursions.”

This argument is illogical because if Russia fears NATO and if its belligerent actions are a reasonable reaction to Washington’s warmongering posture, then it makes no sense from a realist perspective that U.S.-Russia relations warmed at all following the Soviet Union’s disintegration. In 1998, Russia appointed a permanent representative to NATO, and even after NATO’s initial expansion in 1997 and bombing campaign in the Balkan Wars, Washington and Moscow managed for some two decades to cooperate on an extensive array of mutually beneficial issues, such as nuclear arms reduction, intelligence sharing and security, and trade. If Russia regards NATO as an existential threat, then the 2000s, when Russia’s economy grew rapidly thanks to rising oil prices, should have been characterized by the tension we’ve observed in the last two years. But Russia did not initiate a colossal modernization of its military until 2010. Furthermore, policymakers in Moscow can readily observe that China consumes a steadily rising share of Washington’s strategic attention. The last thing President Obama wanted to do during his second term after announcing the United States’ rebalance to Asia and “reset” of relations with Russia was to find ways to threaten a newly belligerent Russia. On the contrary, the Obama administration worked hard to seek Russia’s cooperation in tackling mutual security challenges.

The reality is that NATO has never been an existential threat to post-Soviet Russia. If Carpenter thinks it is absurd for the United States and its allies to fear Russia because it’s too weak to be the expansionist competitor that it was during the Cold War, then it’s doubly absurd for Russia to fear NATO. Most of its members’ defense spending fell during the 2000s, while their armed forces deteriorated to such an extent that only now are they scrambling to raise defense spending and shore up their capabilities. For most of the 2000s, the United States’ focus was trained on the Middle East, where Russia was often cooperative and the two shared some overlapping interests. Crimea’s annexation in 2014 stemmed from the possibility that Ukraine’s government after Viktor Yanukovych’s ouster might sign an association agreement with the EU, whereas the protests in Kiev leading to his removal from power weren’t remotely related to NATO. And even though it is true that Russia is vastly weaker than the United States, Russia has invested heavily in capabilities that have allowed it to dismember neighboring states, interfere in European states’ internal political processes, and harass allied states with aggressive maneuvers such as aerial near-misses, all while using its energy portfolio to coerce and blackmail European customers. And Carpenter expects people to believe that Russia’s sudden “fear” of NATO in 2014 was the cause of its invasion of Ukraine?

If Putin’s apologists think that annexing Ukraine made Russia “safer” from NATO than it was five years ago, particularly now that Russia has reinvigorated NATO’s raison d'être and unleashed growth in European defense spending while prompting the United States to up its presence in eastern Europe, then he is no brilliant grand strategist. Instead, Putin is a shortsighted opportunist who deploys anti-American rhetoric, portrays Russia as a “victim,” and uses Russia’s military modernization to solidify his domestic power. Realists in the United States who malign NATO offer him intellectual respectability that masks the true aims of his belligerent foreign policy.

The fountain of any country’s national power is its economy. The only existential threat Russia now faces is a shrinking population, brain drain, alarming rates of alcoholism, and a hopelessly corrupt and oil-dependent economy. If, despite all this, Putin concludes with a straight face that the threat of NATO required him to dramatically escalate tensions with the West, then he is either completely blind to the real challenges his country faces or profoundly fearful of the day that those challenges overwhelm his ability to paper them over with social bribes and corruption. Although U.S. policymakers must invest in capabilities to address Russia’s disturbing use of new dangerous forms of conflict, such as cyber warfare, which is a threat to U.S. national security of the first order, treating Russia as an honest victim of Western aggression gives Putin’s circle of thugs more credit as global players than they deserve.

Adam Twardowski is a researcher in the Strategy and Statecraft Program at the Center for a New American Security.