Why North Korea Might Get to Keep Its Nuclear Weapons 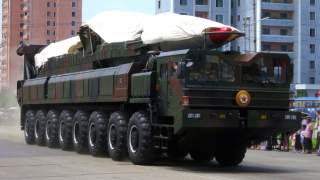 Xi Jinping’s meetings with Donald Trump at Mar-a-Lago this week will be contentious, with violent disagreements on trade and other economic matters expected to dominate the discussions. There is, however, scope for agreement on the other big issue of the day: North Korea. In fact, if Donald Trump can swallow his pride and learn from his predecessor—applying the core principles of Obama’s Iranian nuclear deal to North Korea—he could actually notch up a foreign-policy success.

Clearly, major differences exist between the North Korean and Iranian nuclear crises. Unlike Iran, North Korea has already gone nuclear, successfully testing a number of devices and possessing substantial offensive capabilities. Geopolitical, economic and geographical differences between the two states abound. Most notable may be North Korea’s relative autarky and separation from the global economy, which makes it substantially harder to craft effective sanctions than it was in the Iranian case.

Yet the two cases are alike in one key way: policymakers face a major nuclear proliferation problem with few good options for resolving it. North Korea continues to conduct missile launches. Multiple launches in recent months are no longer mere tests; instead, North Korea appears to be running missile drills for training purposes. At the same time, the country’s development of more sophisticated bombs and delivery vehicles continues.

The Trump administration has so far taken a confrontational approach, suggesting that military options remain on the table, and that they may consider applying secondary sanctions to Chinese companies that trade with North Korea. Yet neither option is likely to alter North Korea’s behavior. Luckily, the Obama administration’s experiences in negotiating the Joint Comprehensive Plan of Action (JCPOA) with Iran suggest that a broad set of principles may increase the chances of a diplomatic solution.

First, there can be no preconditions for negotiations with North Korea. The ability of the Obama administration to get Iran to come to the negotiating table on nuclear issues owed much to their willingness to negotiate without preconditions, a stark contrast to the Bush administration’s insistence that Iran suspend enrichment activities first. For North Korea, the idea that denuclearization is a precondition remains a barrier to talks.

Second, though it is politically difficult to admit, North Korea is unlikely to give up its hard-won nuclear deterrent for any price. Any negotiations must focus on halting North Korea’s program, not on rolling it back. Indeed, a similar—though less profound—compromise was achieved in the Iranian case, with Iran unwilling to completely surrender its domestic enrichment capacities. Policymakers may find it impossible to rollback the DPRK’s nuclear program, but they can prevent it from making future progress on thermonuclear devices and on ICBMs. Unlike the Iranian case, restrictions on missile development are likely to be a key component of any successful deal.

Third, any attempt to negotiate with North Korea must be multilateral in nature. As the JCPOA proved, U.S. pressure can only take you so far; the acquiescence of many of Iran’s trade partners to tough sanctions, followed by a multilateral process that included both states friendly and unfriendly to Iran, was key in producing the deal. The involvement of China and other regional states will undoubtedly be necessary for effective negotiations with North Korea, and the key interests of these states—most notably China’s concerns about instability in the DPRK—must be taken into account.

Indeed, this highlights the final and most important principle: for negotiations on North Korea’s nuclear program to succeed, they must be decoupled from other issues. Though this was in many ways the central criticism of the Iranian nuclear deal—that it did nothing to address Iran’s destabilizing regional behavior—it was also the central component of successful talks. By partitioning the debate over North Korea’s nuclear program from debates about human rights, regime change or Korean reunification, policymakers may be able to achieve a nonproliferation deal acceptable to all parties, including to China.

Yet the JCPOA has been successful in defusing tensions over Iran’s nuclear program and preventing continued development. It may not have resolved broader issues, but it does provide an excellent illustration that narrowly constructed nonproliferation negotiations are possible, even in the absence of a broader diplomatic agreement. Donald Trump can avoid being the president who permits North Korea to develop an ICBM that can reach the U.S. mainland. But he can only do so if he learns to accept and imitate his predecessor’s hard-won diplomatic victory.

Emma Ashford is a research fellow in defense and foreign policy studies at the Cato Institute.