Why Syria Could Become the Black Hole of the Middle East 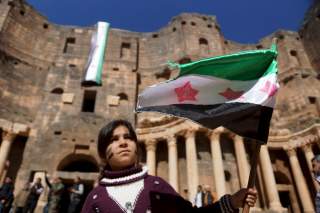 Last week, representatives of Bashar al-Assad’s regime and members of the Syrian opposition met for the eighth time in Geneva for what UN Special Envoy Staffan de Mistura billed as the best opportunity the parties have had to discuss a political transition for the country. Unfortunately, there is very little—if anything—to talk about; both sides remain so attached to their absolutist demands and negotiating positions that even mild compromise on Syria’s political future is beyond reach.

For the last three years, the career UN troubleshooter has had one of the most challenging jobs on the planet. De Mistura has poked, prodded, pleaded and pressured the opposition High Negotiations Committee to acknowledge its weakened position on the ground—and that with less power in the war comes less leverage at the negotiating table. Those calls have fallen on deaf ears. The committee delegation, even with new leadership, doesn’t want to hear about any proposal that would involve relaxing its demand that Assad has to go during a transitional phase. After the killing of four hundred thousand Syrians, relentless bombings on the most arbitrary of civilian targets, the destruction of Syria’s social fabric, the collapse of its economy, and the Syrian regime’s violation of every international human-rights law on the books, the opposition can’t countenance Assad continuing to serve as the nation’s president. It’s a thought process infected by heavy amounts of emotion, even if it’s completely understandable.

The Syrian regime’s negotiators, meanwhile, remain insistent that Assad is the legitimate president of the Syrian Arab Republic and that demands for his removal before Syria’s next presidential elections in 2021 are not credible. Regime officials are convinced that the opposition is a tool of foreign dictates and a channel for Saudi Arabia, the United States and Turkish schemes. What Assad’s enemies view as an ethical and moral imperative for Syrian civilization—Assad’s removal—Damascus views as an infringement on Syria’s sovereignty at the behest of a foreign agenda.

Seven rounds of intra-Syria negotiations since January 2016 have failed to bridge the political divide between the Syrian government and the High Negotiations Committee. The UN-facilitated negotiating process in Geneva has been so unproductive and so dormant that UN officials are relegated to talking up mere participation as an achievement. Some of de Mistura’s press briefings during and after the Geneva talks have sounded almost other-worldly, as if the submission of ideas from both sides of what a political transition should entail is a sign of a breakthrough. Of course, there have been no breakthroughs on any of the central items on the agenda during this entire two-year process.

What should be expected during the eighth round of talks that are set to last until mid-December? Regrettably, absolutely nothing.

With the Syrian regime holding the main cities, the airports, the seaports and most of the country’s population, Assad, for all intents and purposes, has won the war. If he hasn’t won the war yet, he’s coming close to achieving that goal. The amount of territory under the government’s control (or under the control of pro-government militias) continues to expand. Who would have thought at this time last year that Syrian troops would retake Deir ez-Zor? What’s left of the moderate Syrian opposition is confined to a besieged section of the Ghouta region, which is an overcrowded Idlib Province overrun by refugees and jihadist factions like Al Qaeda’s Syrian affiliate, and a few areas down south to which Damascus has yet to devote much manpower. The opposition’s control of territory does not correlate with its position that Assad give up his hold on the presidency, dismantle his administration, get himself and his family out of Syrian politics for good, and make room for a transitional government that would manage free, fair and internationally supervised elections. Syria scholars, like Andrew Tabler, who argue that the United States should not accept Assad’s participation in new presidential elections conveniently ignore the fact that Washington, like the High Negotiations Committee, has very little power in this situation.

If De Mistura is anticipating a better outcome in the eighth round than in the seventh, he’s going to be disappointed yet again. One doesn’t have to register a Kissingerian-like diplomatic I.Q. to recognize that, as long as Assad holds the cards, he’s not going to buckle one iota on political reform. If the Syrian regime was not willing to be pressured into providing political or major constitutional concessions before the Russian intervention—when its survival was very much an open question—then it’s certainly not going to do so when the war has gone Assad’s way for two years. To expect any differently is like expecting a billionaire to pay more money for a business that is going bankrupt just because the billionaire feels sorry for the guy selling the business.  Indeed, the decision of the Syrian delegation to walk away from the talks in Geneva on the grounds that the opposition continues to push for Assad’s immediate resignation is the clearest signal Damascus could have sent about its contempt for the entire process.

At this point in the conflict, it’s hard to believe that the war will end through a political arrangement. And if it does end through such an arrangement, it’s not going to be one that Assad’s opponents will like.

Image: A girl waves an opposition flag during an anti-government protest inside a 2nd century Roman amphitheater in the historic Syrian southern town of Bosra al-Sham, in Deraa, Syria March 4, 2016. REUTERS/Alaa Al-Faqir​