Why the Battle for Mosul Could Become a Total Disaster 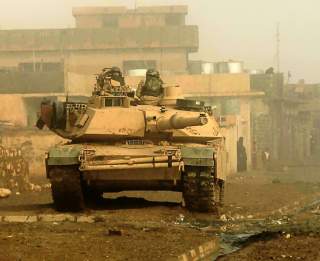 The long anticipated battle against the Islamic State (ISIS) in Mosul has now officially begun. Iraqi Prime Minister Haider al-Abadi is already declaring that his country will “celebrate victory as one" because “Today I declare the start of these victorious operations to free you from the violence and terrorism of Daesh (ISIS).”  While his enthusiasm is understandable, early signs outside of Mosul already augur some troubling problems.

I traveled to the Peshmerga front lines on the eastern approaches to Mosul two months ago and have written on the considerable military challenges facing the combined liberating forces. Yet even before any of the hard fighting has begun, the political and diplomatic challenges facing the anti-ISIS coalition have risen to dangerous levels. These challenges may ultimately prove more formidable than the street fighting within the city itself.

United Nations and other aid agencies continue to warn of potential catastrophe for civilians that are expected to flee as the fighting escalates in the coming weeks and months. Under-Secretary-General for Humanitarian Affairs Stephen O’Brien said there is presently only space for 60,000 displaced persons. They are in the process of constructing facilities to accommodate a total of 250,000.

The UN only has enough food on the ground, however, to feed 220,000 and depending on the severity of the fighting, O’Brien said, “as many as one million people may be forced to flee their homes in a worst-case scenario, …(yet) funding has been insufficient to prepare fully for the worst-case scenario.” It appears Iraqi officials are trying to mitigate the humanitarian crisis by showering Mosul residents with leaflets imploring them not to flee, but shelter in place; perversely, ISIS has likewise ordered civilians not to flee. How the government expects those citizens to get adequate food, water, and medical help in the event of a protracted fight was not explained.

Aside from the continuing potential for a humanitarian catastrophe, challenges among the anti-ISIS coalition and other residents outside of Mosul continue to mount. Without Kurdish Peshmerga attacking Mosul from the east, Iraqi forces would have little chance of defeating ISIS. Yet Kurdish leaders have not been shy about declaring that whatever territory they liberate from ISIS in and around Mosul will remain part of Kurdistan. In response Abadi warned the Kurds against such ambitions.

Also necessary for coalition success are the many Shiite militia, generally known as Popular Mobilization Units (PMU). Many PMU leaders, however, have publicly warned that not only will they not work with the American military, some outright advocated killing US troops.

Mid-East news service Al-Monitor reported earlier this month that “Hassan al-Kaabi, a member of the PMU backing up the Iraqi government forces, rejects the presence of US troops in the battle for Mosul (and said) ‘I will fight them wherever they are.’”

In addition, Al-Monitor reported, “Qais al-Khazali, the general secretary of the prominent PMU faction Khazali Network, also has threatened to kill US troops in the battle for Mosul.”  Yet the most serious situation involves the Turkish Armed Forces.

There was a dustup between the governments of Turkey and Iraq on October 1st when the Turkish parliament voted to extend their troops’ stay in Iraq.   The Iraqi parliament immediately condemned the vote, accusing Turkish troops of being occupation forces. Abadi demanded Ankara withdraw its troops.  Turkish President Recep Erdogan refused. He insulted the Iraqi leader in the process, declaring Abadi is “not on my level.”  Turkey is also demanding a role in the liberation of Mosul.  Abadi has said no. He warned that if Turkey doesn’t withdraw they risk “regional war.”  On Monday, however, statements by Erdogan served to increase the potential for a clash between two American allies.

Ebil-based news agency Kurdistan24 reported that the Turkish President, “invoked on Monday an early 20th-century irredentist document that claimed the Iraqi city of Mosul as Turkish soil.” The document Erdogan referred to, Kurdistan24 explained, “referred to an Ottoman Parliament-sealed, 1920 pact that designates Kirkuk and Mosul as parts of Turkey… ‘They say Turkey should not enter Mosul,’” Erdogan was quoted as saying, “‘Come on! How do I not enter?”

These threats should not be casually dismissed. A look at a map of the region reflecting the 1920 document to which Erdogan referred shows most of northern Iraq – including not only Mosul but also Erbil – as lying with Turkish territory. Last Sunday Turkey’s Minister of Defense, Fikri Işık, said Ankara was going to push their military control of northern Syria, currently 20 kilometers (km) deep along a 90 km of the border, “even further, by 45 kilometers. We will create a security zone in northern Syria, and thus we will eliminate the threat to our territory.”  How much territorial ambition Ankara has beyond their expanding positions within Syria and Iraq is as yet unknown.

The bottom line is that the United States is presently basing its hopes on ending the war in Iraq against ISIS on:

· an Iraqi military partially rebuilt after its destruction in 2014;

· Kurdish Peshmerga that intends on keeping any territory they win;

· Shiite militias that hate the Sunni militias and civilians and has threatened to kill Americans;

· Sunni militias that have still unresolved issues with the Shia-dominated government in Baghdad;

· and a NATO ally that has occupied territory in two neighboring states and is threatening to crash the Mosul-liberation party while the Iraqi PM threatens war against Turkey.

This unstable plan and volatile coalition formed to wrest control of Mosul from ISIS is the result of a stubborn Washington reliance on a foreign policy that seeks to feature military power to compel others to our will and a never-ending attempt to find quick answers to complex and multi-dimensional problems. Predictably, such a method of conducting foreign policy succeeds only in the continual degradation of the problems we seek to solve and the diminution of American national security.

The United States is going to have to abandon interventionist proclivities and adopt a more restrained use of military power. May that transition occur quickly.