Why the Left Overlooks the Trump-Kim Summit Positives 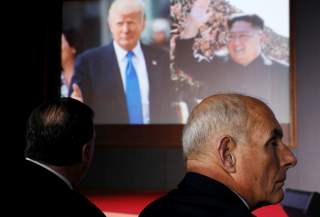 There should be a pervasive sense of relief that tensions on the Korean Peninsula have eased dramatically, culminating in the surprisingly cordial atmosphere of the Singapore summit between Donald Trump and North Korean leader Kim Jong-un. Instead, much of the reaction among Trump’s liberal critics has consisted of sneering and sniping at the results of that meeting. It is another unfortunate manifestation of America’s increasingly dysfunctional political culture. Worse, such a knee-jerk, ideological response can undermine prospects for a lasting, beneficial change in the acrimonious relationship between the United States and North Korea that has plagued the international community for decades.

Critics level various dubious objections regarding the summit. One is that Kim emerged as the clear winner from the talks. Some of the same people who denounced Trump just a few months ago as an unhinged warmonger who would plunge the Korean Peninsula into unimaginable bloodshed now depict him as an ill-prepared amateur that the wily North Korean easily conned.

The United States afforded Kim a huge boost in prestige, the argument goes, by affording him a face-to-face meeting with the president and treating him as an equal. “In his haste to reach an agreement, President Trump elevated North Korea to the level of the United States while preserving the regime’s status quo,” intoned House minority leader Nancy Pelosi. Other congressional Democrats were equally caustic. “What the United States has gained is vague and unverifiable at best,” Senate Minority Leader Chuck Schumer groused. What North Korea has gained “is tangible and lasting.”

Progressives seemed at least as upset as conservative hawks that Trump promised to suspend the annual joint U.S.-South Korean military exercises—a major objective of Pyongyang for decades—and indicated that Washington hoped to withdraw its forces someday. Regarding the war games, MSNBC’s Rachel Maddow typified the left-of-center press reaction, accusing the president of a “giveaway to North Korea.”

Washington supposedly received nothing of substance for such appeasement. North Korea made no concessions on its nuclear and missile programs or much of anything else, critics allege. Trump, they contend, should have insisted on meaningful policy changes from Pyongyang even before agreeing to the meeting, or at the very least, as provisions in the joint statement that emerged from the summit.

Such objections are wrong on two counts. First, Pyongyang did make some significant concessions. Not only did Kim explicitly reiterate that the ultimate result of negotiations would be the complete denuclearization of the Korean Peninsula, but North Korea offered specific gestures of good faith in response to the improved bilateral relationship. Once the United States dialed back the threatening rhetoric in the lead-up to the summit, Pyongyang suspended its nuclear and ballistic missile tests. The North Korean regime also released three American detainees and agreed to return the remains of U.S. soldiers killed in the Korean War.

Second, the summit was designed to be merely the opening phase of a long diplomatic process to address the nuclear issue and other areas of disagreement. It accomplished that purpose, altering the atmospherics of the bilateral relationship in a positive way. For the first time, U.S. and North Korean leaders engaged in a cordial dialogue. Regardless of the substantive results of the talks, that was a welcome, long-overdue change. The notion that the many entrenched quarrels between Washington and Pyongyang could be resolved at one summit meeting is inherently unrealistic. Likewise, expecting North Korea preemptively to capitulate regarding its nuclear program is naive.

Perhaps the most unfair objection, though, is that Trump did not press the issue of Pyongyang’s dreadful human-rights record. That criticism fails to appreciate the difference between desirable aspirations and attainable objectives. Demanding that Kim negotiate regarding that issue would have torpedoed the summit at the outset. Quixotic goals have no place in meaningful diplomatic negotiations.

When Nixon held his summit meeting with Mao Zedong in 1972, he did not demand that the Chinese strongman end the Cultural Revolution or free the PRC’s political prisoners. He refrained from doing so for a very good reason. Insisting on such reforms would have strangled the U.S.-China rapprochement in its cradle. Likewise, Washington signed important, but limited, agreements with the totalitarian Soviet Union without demanding that Moscow abolish its gulags. Such achievements included the Partial Nuclear Test Ban Treaty, barring atmospheric nuclear tests, the Strategic Arms Reduction Treaty (START), and the Intermediate-Range Nuclear Forces Treaty. U.S. negotiators wisely did not let the perfect become the enemy of the good. Trump’s critics apparently have forgotten that lesson.

Indeed, there is a striking contrast between the reaction of leading liberals to Nixon’s opening to China (including the signing of Shanghai Communique) and the reaction of today’s prominent liberals to Trump’s rapprochement with North Korea. The New York Times correctly predicted that Nixon would receive strong bipartisan support in Congress for his diplomatic breakthrough. Leading congressional Democrats, including Ted Kennedy and Mike Mansfield, praised the president for easing tensions with China. Liberal columnist James Reston stated that it was Nixon’s finest hour.

There was very little comparable praise for Trump’s dialogue with Kim from the left side of the political aisle. A few progressives, such as the Atlantic’s Peter Beinart, spoke favorably of the effort, but they constituted a distinct minority.

The negative liberal reaction to Trump’s initiative is most unfortunate, and it is a measure of the corrosive impact of ultra-partisanship on U.S. foreign policy. Donald Trump may deserve criticism for many of his foreign-policy actions, including insulting allies such as Canada’s Justin Trudeau, conveying inconsistent messages on crucial issues, and sabotaging the nuclear agreement with Iran. But taking steps to ease dangerous tensions on the Korean Peninsula is a good development, no matter who is the architect of that badly needed policy change.

Ted Galen Carpenter, a senior fellow in defense and foreign-policy studies at the Cato Institute, is the author of ten books on international affairs, including (with Doug Bandow), The Korean Conundrum: America’s Troubled Relations with North and South Korea (Palgrave Macmillan).