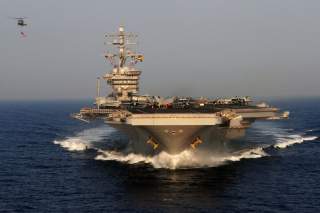 According to Ian Bremmer, “American international leadership, a constant since 1945, will end with the presidential inauguration of Donald J. Trump on Jan. 20, 2017.”

That’s not because Trump is bound to fail where his predecessors have succeeded. Given the rise of other countries with enough power to shrug off U.S. pressure . . . this moment was inevitable. America will remain the sole superpower for the foreseeable future. . . . But Trump’s election marks an irreversible break with the past, one with global implications.

I mostly agree, though, as a historian, I doubt that anything is inevitable or irreversible. Things happen because of the decisions we make. It is time for America to choose, a key theme of Bremmer’s book, Superpower: Three Choices for America’s Role in the World.

Over the past several decades, we’ve chosen wisely, at times, and foolishly on other occasions. Yet the chief cause of America’s relative decline—and it’s only relative—is not our mistakes but rather our successes. We’ve helped a lot of other countries get rich(er), in large part because it enabled us to get even richer. Even the poorest Americans enjoy a standard of living that seems affluent by the standards set a half century ago. The rest of the world is living better, longer, healthier lives, too.

But, as Bremmer notes, that also means that other countries are in a stronger position to resist when Uncle Sam pushes them to do things that they’d rather not. The rise of the rest is also a major theme in Fareed Zakaria’s The Post-American World. In the book, Zakaria concludes that a reorientation of the U.S. approach to the world is needed, but he doesn’t believe that that translates into an end of American leadership. (Interestingly, between the first edition and 2.0, Zakaria became slightly more pessimistic that we could pull it off, essentially predicting the rise of “America First” isolationism.)

For many years, I assigned The Post-American World to the students taking my U.S. foreign policy class at the University of California’s Washington Center. Last year, I replaced Zakaria’s book with Bremmer’s Superpower. Bremmer offers America First (i.e., Independent America) as only one of three possibilities (the others are Moneyball and Indispensable America), but he prefers a particular brand of America First: he thinks we should be more reluctant to use force, but remain committed to global trade, and welcome the next generation of Americans wishing to follow in the footsteps of previous waves of immigrants who made the United States what it is today.

We see in Trump’s rise a rejection of such approaches. For many Trump supporters, and perhaps for Trump himself, America First means exactly that. America. First.

And it’s not just Trump supporters who feel that way. Americans seem generally disinterested in paying the costs of global leadership, especially if that means foregoing domestic priorities. Deficit spending may conceal the cost of a huge military buildup combined with a massive infrastructure package and a slew of other domestic giveaways, but it’s not obvious that greater economic growth will eventually make up the difference.

On the other hand, perhaps American global leadership will persist? After all, the gap between what the public wants and what the elites are giving them is decades old, and we’ve sustained it before. The people who surround Trump may figure out a way to continue the status quo. Cato’s Ben Friedman argues that Trump will be hawkish. Ben and my former colleague Justin Logan contend that primacy (aka liberal hegemony or deep engagement) has, well, hegemonic control over foreign-policy discourse among DC elites. Academics debate the flaws and misconceptions of primacy all the time, but many in the foreign-policy establishment seem blissfully unaware of this academic debate, often even ignoring the scholars in the academy who agree with them.

Trump and Trumpism may change all that, compelling primacy advocates to actually make the case for their preferred strategy. Meanwhile, Trump’s emergence—even if he doesn’t follow through on his most ham-fisted attempts at burden shifting—is already inducing a measure of hedging on the part of longtime U.S. allies.

This could go in one of two directions: bandwagoning, in which America’s allies kowtow to America’s adversaries (Russia, Iran and China); or balancing, in which other countries do more to defend themselves. I think the latter will occur more often than the former. Nationalism is a powerful force, and countries don’t like capitulating to rule by others. That same nationalism explains why U.S. influence over allies has attenuated as they have become richer.

For as long as I’ve been at Cato, I’ve been calling for a different approach to U.S. global leadership. Others at Cato have been beating the drum for far longer. Now we might get the new approach to U.S. foreign policy that we’ve been clamoring for, even though I’m not happy with how it has played out so far. I still believe that America can lead the world without trying to run the world. That doesn’t mean closing the country off from contact with outsiders. Our vast power is a problem to the extent that it enables us to make foolish decisions, but isolationism will not keep Americans safe, prosperous and free.

Thus, the key question is not whether America will lead into the second and third quarters of the twenty-first century, but how it will do so. As the world’s dominant economy, we still possess vast economic power. Judging from global sales of Apple iPhones, or the popularity of Disney’s Frozen, there is reason to be bullish on Brand USA. Cute animated movies with catchy songs, however, won’t convince Putin to disgorge Crimea, or China to forget about its Nine-Dashed Line in the South China Sea.

Adapting a new variety of U.S. leadership will require patience, subtlety and a willingness to compromise—i.e., not the character traits that one normally associates with Donald Trump. But he, and we, are better off choosing now, rather than having choices forced upon us in the future.