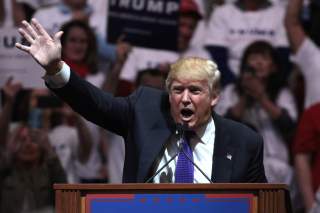 Now that “the Donald” pulled off the miracle at the ballot box he was looking for (this Tuesday’s election was a modern day political version of David vs. Goliath), we can all stop prognosticating about whether Trump’s comments about women and Mexicans would translate into an influx of minorities and college-educated white voters seeking to defeat him. Based on the exit poll data, that clearly didn’t happen.

Now we can prognosticate about what President-elect Donald Trump’s foreign policy will look like, what kind of people he would pick to staff his foreign policy bureaucracy, and whether he has the gravitas and good-sense to assuage the genuine concern that many of Washington’s allies have about even the possibility of Trump sitting in the Oval Office.

There are a lot of questions swirling around about the extent to which Donald Trump will rip up his predecessor’s achievements. Foremost in many people’s minds is the Joint Comprehensive Plan of Action (JCPOA), a multilateral agreement whose implementation is not even a year old but one that has been on the Republicans’ target list ever since the deal was endorsed by the U.N. Security Council. Congressional Republicans have made no secret of their complete lack of confidence about the JCPOA’s viability as a durable arms control accord, so it also wouldn’t be a surprise if the new GOP-controlled Congress uses a Trump presidency to push the White House closer to its view.

Iranian President Hassan Rouhani is clearly concerned that Trump will take the advice of the deal’s most vociferous opponents and tear the accord to shreds. Speaking to state media, Rouhani attempted to water down the prospects that the United States under a new administration would even be allowed to back out of the agreement’s terms; the agreement, he argued, is codified in a U.N. Security Council resolution, which would mean that a new resolution would need to be passed to change the agreement or eliminate it. This, of course, isn’t true; under the JCPOA, the United States could effectively destroy the agreement unilaterally by blocking renewed sanctions relief at the Security Council, which would surely compel Tehran to walk away and expel International Atomic Energy Agency (IAEA) inspectors from its territory. But Rouhani nonetheless opens up a critical question: would Donald Trump actually destroy an agreement that so far appears to be working?

Deciphering Trump’s intentions is a silly business to begin with. He isn’t an ideologue coming into the White House with a solid set of foreign policy beliefs. He appears to look at the world as an extension of the real estate business—there are no permanent friends, no permanent enemies and certainly no permanent agreements. On the subject of the Iranian nuclear agreement, Trump has been all over the place, first calling it disastrous and the worst deal that has ever seen negotiated in the history of the planet, only to later say that he probably wouldn’t tear up the accord because Washington was obligated to stick to the commitments it publicly signed up to. Then, speaking to AIPAC, he drew loud applause when he remarked that his “number-one priority is to dismantle the disastrous deal with Iran.” Minutes later, he contradicted himself by saying he would police it so strongly that the Iranians wouldn’t even have an opening to cheat.

Trump’s ambivalence and wishy-washiness isn’t much comfort for people who worked on the negotiation tirelessly over a matter of years. Richard Nephew, the former sanctions official who helped put in place and implement nuclear-related economic restrictions on the Iranians, strongly believes that the JCPOA is a dead deal walking and will be slowly strangled to death as soon as Trump is sworn in. In many ways, he could be right; if the rumors are true and Trump nominates John Bolton as secretary of state, it’s almost unfathomable to believe that Washington would continue to certify that Tehran is meeting its nuclear commitments. This is the same guy who, during the tail-end of the P5+1 negotiating process for an interim, placeholder accord, wrote in the New York Times that the United States needed to bomb Iran’s facilities or at least support the Israelis so they could do it themselves.

We should also anticipate a freshly minted Republican-controlled Congress to continue to introduce tough sanctions legislation on Tehran’s other activities, which in all practicality could target the very types of Iranian business activities (oil, shipping, manufacturing, banking) that are now permitted under the sanctions relief granted by the P5+1. It’s impossible to know how Trump and his foreign policy advisers would react when the Iranians inevitably violate the JCPOA in a minor way, as the IAEA confirmed for a second time in less than a year during its latest quarterly assessment. The people surrounding Trump, or perhaps Trump himself, could ditch the diplomatic mechanisms embedded in the agreement that are designed to work out minor problems in favor of a no-holds-barred return of U.S.-imposed secondary sanctions. This would technically be permissible under the JCPOA’s terms, although perhaps not in the JCPOA’s spirit.

As a supporter and avid defender of the Iranian nuclear agreement, I can only hope that Trump exhibits the kind of cutthroat pragmatism that he used during his five decades in the business world. I, and many like me, can only hope that Trump understands that an Iran without a nuclear weapons capability for the next ten to fifteen years is far better for America’s bottom-line than an Iran without a nuclear capability for the next two or three years—the amount of time that would be bought from a U.S. military strike on Tehran’s nuclear facilities. The hardliners in Congress and in several conservative Washington think-tanks are hoping for exactly the opposite—that an incoming Republican administration, in partnership with a Republican Congress, will either scrap Obama’s terrible deal with the Iranians entirely or double down on economic sanctions in order to coerce Tehran into more concessions.

The health of the JCPOA, President Obama’s single most important foreign policy achievement, is totally up in the air.