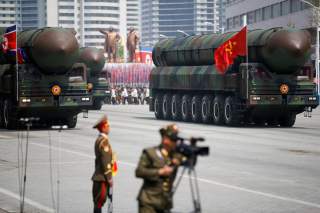 Secretary of State Rex Tillerson insists that contrary to news reports he did not consider resigning. However, he failed to deny that he called the president a moron. President Donald Trump returned the favor in his own unique way.

Secretary Tillerson recently indicated that America is “probing” North Korea for “lines of communication” regarding possible negotiations. Indeed, added Tillerson, “We can talk to them; we do talk to them.”

But then the president declared that the secretary was “wasting his time trying to negotiate with Little Rocket Man.” The critique came from the same President Trump who once said he would be “honored” to meet the North’s Kim Jong-un. In fact, his secretary of defense, Jim Mattis, recently insisted that North Korea “is still a diplomatically-led effort.”

It’s unclear what to call foreign policy in the Trump administration. It’s not unusual for a president to assert control over his secretary of state’s portfolio—but rarely has the chief executive been so at odds with his own appointees. Washington now appears to have at least two different foreign policies on a range of issues.

In this case Secretary Tillerson has the better argument.

President Trump spent the last couple of months doing the foreign-policy equivalent of the Maori Haka in an attempt to intimidate Kim. But the latter has mastered the art of the florid threat and will always trump Trump when it comes to insults. For instance, the North Koreans responded to the president’s threat to “destroy” the Democratic People’s Republic of Korea by calling him a “mentally deranged U.S. dotard.” A lot of Americans might agree.

In belittling his secretary of state’s efforts, the president insisted that “we’ll do what has to be done!” What that is, however, no one knows—probably not even the president himself.

So far Trump’s policy looks a lot like that of his predecessor. Washington presses for more sanctions whenever the North tests a missile or nuke and China further tightens the screws, ever slowly. Meanwhile, Pyongyang blusters as it continues developing weapons. The major difference today is the U.S. president constantly threatens war.

The more President Trump does so without acting, the more he looks like a loud-mouthed poseur. In which case, the North Koreans may not take his threats seriously—even when they should. But even scarier is the thought that he might be serious. U.S. military strikes, even if initially limited in scope, likely would trigger the Second Korean War.

The DPRK demonstrates that paranoids can have enemies. It would have every reason to believe that almost any action directed at decapitating the North’s leadership or destroying the country’s most powerful weapons was a prelude to regime change because Washington has done that elsewhere. The outcomes of those other wars demonstrate that Pyongyang cannot yield the initiative to America. If the North waits, then the United States would use its overwhelming conventional advantage to degrade the former’s military capabilities. North Korea’s most rational course would be to strike immediately to preempt a feared U.S. attack.

Although the Republic of Korea and United States would ultimately win, the cost would be horrendous. War games put likely casualties in the tens of thousands or possibly in the hundreds of thousands. Particularly vulnerable would be Seoul, which sits just thirty-five miles from the border. The Seoul-Inchon metropolitan area is home to around half of the ROK’s population, some twenty-five million people. Exactly how vulnerable the South’s capital is to DPRK artillery and Scud missiles is a matter of some debate.

Most analysts believe the casualties would be many and the damage would be severe. Reassuring claims from U.S. hawks that war would be no big deal are convenient when uttered by those with the Pacific Ocean between them and any combat. For instance, Rep. Duncan Hunter recently argued that residents of Seoul could head underground or go south. Americans should imagine the consequences of DPRK forces posted up the Hudson River or on Long Island initiating massed artillery barrages and dropping Scuds tipped with high explosives, chemical and biological weapons, and nukes on Manhattan. Would Hunter be satisfied with the suggestion that residents of the Big Apple head for the subway or look for a way out of the city?

Indeed, South Korea would become a massive battleground. Washington would have triggered the very war that it has sought to prevent since the armistice ended fighting in the Korean War in 1953.

Additionally, sanctions alone are unlikely to bring Pyongyang to heel. The Kim regime is feeling the pressure and more could be done. However, the well-being of the North Korean people, especially the millions viewed as untrustworthy and stuck in the countryside, is not a priority for Pyongyang. To the contrary, during the late 1990s a half million or more people died of starvation. Still, the current ruler’s father continued to build up the country’s nuclear program.

So just what does the president believe has to be done? He is far better at making threats than taking action. “I won’t fail,” he promised. But that’s scant comfort.

There is widespread agreement that Pyongyang believes nuclear weapons are necessary to ensure regime survival and that it won’t be talked out of them. The North Koreans with whom I met when I visited the DPRK in June were insistent on that point, which matches their government’s behavior. In the midst of the Tillerson-Trump brouhaha the State Department acknowledged that “North Korean officials have shown no indication that they are interested in or ready for talks regarding denuclearization.” But that is no reason not to meet.

Talking to North Korea would serve several purposes. One purpose would be to simply reduce the political temperature on the peninsula. While no one actually wants war, least of all Kim, whose forces would lose, mistake or misjudgment could turn the highly militarized confrontation from cold to very hot.

Moreover, as Victor Cha, who is reportedly slated to be the new U.S. ambassador to South Korea, has observed in the past: Pyongyang’s behavior appears to be less provocative when the regime is engaged diplomatically with America. The North probably then sees more potential benefit from more responsible behavior; bilateral contact might also reduce the Kim dynasty’s sense of being under siege.

Talking also would reduce Pyongyang’s incentive to use other ways to get Washington’s attention, such as flaunting detained Americans. The ban on travel to the DPRK is not a good substitute, since it ends a small but valuable means to erode Pyongyang’s information control at home.

More important, talks with “Rocket Man” would open channels to a regime that we barely understand and that is becoming more dangerous. Washington could have refused to engage Joseph Stalin’s Soviet Union during the Cold War, but then the world would almost certainly have been more volatile and the potential for conflict even greater.

Finally, negotiators could look for “deals” that are in the interest of both nations. It is unlikely that North Korea will give up its nuclear weapons, and President Trump’s cascade of military threats has only strengthened the regime’s reason to construct both missiles and nukes as a deterrent against American military action.

Nevertheless, the “perfect” should not become the enemy of the good. Steps short of denuclearization could still advance U.S. security.

For instance, a freeze on testing would slow the North’s development of a force capable of threatening the U.S. mainland. Limiting the size of Pyongyang’s nuclear arsenal would at least constrain the Kim dynasty’s potential for doing harm. Maybe the DPRK wouldn’t be interested. Maybe it would not accept the necessary inspections and other safeguards. Maybe.

But Washington won’t know until it asks.

Moreover, making the effort would encourage enhanced Chinese cooperation with Washington. Beijing wants neither a failed state nor a united Korea allied with America hosting U.S. troops on its border. Indeed, the Xi government blames American policy for creating the current crisis by threatening and isolating North Korea over the years.

The Trump administration’s best response would be to make a serious effort to engage Pyongyang. Even if doing so didn’t convince North Korea’s supreme leader Kim Jong-un, it might persuade Chinese president Xi Jinping.

Some of President Trump’s instincts have merit. After decades of support, why do the American people continue to subsidize the defense of populous, prosperous allies in Asia and Europe? But his newfound enthusiasm for war is counterproductive and dangerous.

In contrast, Secretary Tillerson is doing just what the secretary of state is supposed to do—looking for a peaceful alternative. His efforts might be doomed to failure, but he, and we, can’t be sure unless he tries.