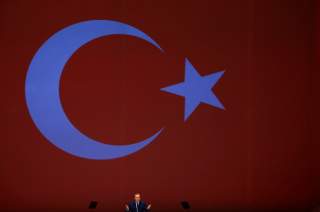 An important part of international diplomacy is making the outrageous palatable. Extortion and menace are routine aspects of foreign relations. Other than extreme examples such as North Korea, however, governments normally veil their threats. Pretense is a diplomatic virtue.

Not for Turkish president Recep Tayyip Erdogan, a sultan wannabe who has accumulated increasingly dictatorial powers along with an extravagant presidential palace to match. He frankly admitted to holding an American as a human chit to trade for Muslim cleric Fethullah Gulen, whom Erdogan accuses of planning the unsuccessful 2016 coup attempt. “Give us the pastor back,” said Erdogan. “You have one pastor” of ours. “Give him to us. You can easily give him to us. You can give him right away. Then we will try [American Andrew Brunson] and give him to you.”

Despite President Donald Trump’s strange new respect for dictators, Erdogan is hostile toward America. Washington should drop the pretense that Ankara is an ally. There always will be areas for cooperation, but these days the Turkish government is as likely to oppose as support U.S. interests and values.

When Erdogan’s party first won election in 2002, the former Istanbul mayor was a liberator. He helped dismantle the authoritarian-nationalist state created by Turkey’s founder Mustafa Kemal Ataturk. Among Erdogan’s most fervent backers were liberals. One of his signal achievements was putting the military back into its barracks. The Justice and Development Party, though Islamist, even improved the treatment of women, addressing domestic violence, for instance.

However, a few years ago Erdogan shifted course. He once stated that democracy was like a train: you get off when you reach your destination. He apparently reached that destination after the party won its third parliamentary election in 2011. As charges of corruption mushroomed, Erdogan’s government became more authoritarian and Islamist. After losing his parliamentary majority in 2015, he won it back by playing the Kurdish card, ramping up the brutal campaign against the radical Kurdistan Workers’ Party that had previously cost tens of thousands of lives.

Erdogan’s rise was aided by Fethullah Gulen, a Muslim cleric living in the United States who built a global religious and social movement, known as Hizmet. Two decades ago Gulen received political asylum when authoritarian secularists dominated Turkish politics. Gulen’s loyalists were many, but his political ambitions remained a matter of debate. In 2013, the politician and preacher turned on each other. Gulen’s followers in police and prosecution offices investigated alleged corruption reaching Erdogan, and Erdogan retaliated by purging Gulenists from security agencies.

The Justice and Development Party also shrunk the space for other critics. Opposition businessmen faced politically motivated regulatory attacks and tax investigations. The regime seized independent media organizations, arrested journalists and intimidated critics. The government sued hundreds of Turks, including school kids, for insulting Erdogan. The increasingly brutal assault against the Kurds turned communities into war zones. So far hundreds of civilians have died, perhaps a half million have been displaced, scores of local officials have been dismissed, and security forces have been immunized from prosecution.

Erdogan’s relationship with U.S. and Western leaders deteriorated even further after the failed July 2016 coup. Not everyone in the West seemed disturbed by the attempted ouster of the Turkish president—even though a military takeover would have been the cure that killed the patient. His government had been reelected multiple times; the likely result of a successful putsch would have been civil war.

Unfortunately, rather like Adolf Hitler and the infamous 1933 Reichstag fire, the Turkish president used the attempted putsch as an opportunity to crush all opposition. Any criticism was treated as veritable treason. (So quick was he to take advantage of the badly managed coup that some observers suggested that Erdogan likely staged it.)

Even before the effort collapsed he contended that it had been masterminded by his former ally, Gulen. Erdogan then sought to destroy the Hizmet movement, dismantling schools, businesses and other organizations associated with Gulen. Ankara initiated a massive, Stalinist-style purge of anyone with the slightest connection to the movement, including opening an account at a bank owned by supposed Gulenists.

Some 170,000 people have been subject to various legal proceedings, more than 150,000 have been fired or suspended, and over fifty thousand have been arrested. Even the government does not contend that most of these people were involved in the failed coup. Yet every week additional arrests and dismissals are announced.

Targets include parliamentarians, judges, prosecutors, professors, teachers and journalists. More than 160 media sources have been closed. Websites have been blocked and around 150 journalists have been jailed. Nearly four hundred nongovernmental organizations—including human rights, humanitarian and legal groups—have been closed. The chairman and director of the Turkish chapter of Amnesty International have been arrested. Evidence of wrongdoing is irrelevant, since the charges typically involve the barest association with someone in the Gulen movement or Kurdish leadership.

Explained Human Rights Watch: “The crackdown that followed the coup attempt was symptomatic of the government’s increasing authoritarianism. Under the state of emergency, the president presides over the cabinet, which can pass decrees without parliamentary scrutiny or possibility of appeal to the constitutional court. Many decrees passed contain measures that conflict with basic human-rights safeguards and Turkey’s obligations under international and domestic law.”

The Erdogan government also targeted Washington, stoking popular conspiracy theories—four of five Turks have a “negative” or “very negative” view of America—that the United States was behind the coup. One cabinet minister forthrightly blamed Washington. Ankara also sharply criticized the U.S. government for failing to extradite Gulen. (Given the political benefits of blaming Washington, some suspect Erdogan hopes the United States will continue to spare him the challenge of actually having to try Gulen.)

Unlike in Turkey, extradition requires evidence sufficient to satisfy an independent judge. Although the Turkish government insisted on his guilt, it has provided little evidence. The Gulen movement never had much success in infiltrating the military leadership, and most participants in the coup had no Gulenist association. Western intelligence agencies saw no evidence that the seventy-six-year-old imam masterminded the coup. The little testimony cited by Ankara likely resulted from torture. Human Rights Watch noted “increased reports of torture and ill-treatment in police detention, such as beating and stripping detainees, use of prolonged stress positions, and threats of rape, as well as threats to lawyers and interference with medical examinations.”

Washington’s refusal presumably led to Erdogan’s offer to trade Brunson, an American pastor who has lived in Turkey for twenty-three years, for Gulen. Brunson was arrested last fall and has been charged with “terrorism” and attempting “to overthrow the Turkish government,” though an official indictment has yet to be filed. Ankara has arrested several other Americans on equally dubious charges, including a chemistry professor, NASA scientist, and real estate agent. Their family members have been prevented from leaving the country. The Erdogan government detained Europeans as well and suggested releasing German citizens in return for Berlin’s arrest of members of the Gulen movement sought by Ankara.

Further damaging relations was the assault by Erdogan’s security personnel on peaceful demonstrators outside of the Turkish embassy during his recent visit. Subsequently fifteen of them were indicted, though they remain beyond justice in Turkey. Moreover, the United States arrested Turkish-Iranian gold trader Reza Zarrab, charging him with breaching sanctions against Iran. He is thought to know details of high-level corruption in Ankara. Similar charges were recently brought against a former cabinet member and others. Erdogan called the investigation “a step against the Turkish republic.”

Turkey arrested U.S. embassy employees—Turkish citizens—in February and early October. In the latter case Ankara charged the defendant with being involved in the coup based on four-year-old conversations with someone associated with Gulen. Subsequently, the government summoned another local employee for questioning after detaining his wife and son—a common tactic used to force a confession.

In retaliation, the U.S. embassy announced that it was halting the processing of visas to America. Turkey then responded in kind. Unfortunately, relations seem destined to deteriorate further as Erdogan attempts to force Washington to choose between acquiescence to tyranny and commitment to human rights and the rule of law. In August Erdogan said “Sooner or later the U.S. will make a choice” between “the coup-plotting terrorist” Gulen movement and Turkey. However, when asked about its willingness to trade Gulen for Brunson, State Department spokeswoman Heather Nauart said: “I can’t imagine that we would go down that road.” Legally it cannot.