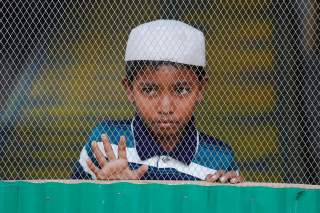 Bangladesh was born in 1971 after India intervened in Pakistan’s civil war, which resulted in the independence of what was known as East Pakistan. The new state’s politics were violent too, punctuated by military rule, which pushed to Islamicize the secular state. Bangladesh today is nominally democratic, but politics is bitterly fractious and violent.

Moreover, Islamist tides are rising. Like a number of other majority Islamic states, such as Afghanistan and Pakistan, a once relaxed social atmosphere has grown more intolerant. While the country never was truly liberal, it largely accepted those who were. But both private and public attitudes have shifted. On the rise is fundamentalism, accompanied by the demand that others be forced to comply. Private violence has become the norm as the government increasingly plays the Islamic card for political purposes.

In early January blogger Asaduzzaman (Asad) Noor was arrested for authoring allegedly blasphemous posts. He is known for criticizing persecution against Hindus. The twenty-five-year-old had been on the run and was arrested at Dhaka Shahjalal International Airport while attempting to leave the country.

Last January the head of an Islamic seminary accused him of defaming Islam. Demonstrators then targeted him. Inspector Mohammad Shahidullah explained that “The charge against him is that he hurt religious feeling by mocking Prophet Mohammad and made bad comments against Islam, the prophet, and the Koran on Facebook and YouTube.” Noor faces a minimum of seven years and up to fourteen years in prison.

His arrest reflects the government’s increasing efforts to appeal to Islamist sentiments. In 2013 four bloggers were arrested after being targeted by nationwide protests for alleged atheism. The prime minister’s son explained: “We don’t want to be seen as atheists.” They were later released. The following year an online activist was sentenced to seven years in prison for posting songs satirizing the prime minister and other political figures. Since then hundreds of Bangladeshis have been arrested for alleged online offenses, though few appear to have been ultimately convicted and imprisoned.

Less lucky have been those targeted by Islamic extremists. About a dozen bloggers and others have been killed over the last couple of years, often hacked to death in gruesome fashion. Some people targeted by radicals have fled the country. Moreover, terrorists have become active in Bangladesh. Last year militants killed twenty-two customers, most foreigners, at a Dhaka café. The security problem continues to grow, and some seventy Islamic radicals have been killed by the government.

Bangladesh has the world’s fourth largest Muslim population. Roughly 90 percent of Bangladesh’s population profess Islam; 9.5 percent is Hindu. The remaining Bangladeshis are primarily Christian and Buddhist. But like India and Pakistan, Bangladesh began as a secular government. Although Islam is the state religion, the government officially prohibits favoritism toward any faith. According to the constitution: “the State shall ensure equal status and equal rights in the practice of the Hindu, Buddhist, Christian and other religions.”

However, the atmosphere has grown more difficult for all religious minorities. The basic idea of a secular state is under attack by political Islamists who want Islamic if not violent rule. Some extremists would simply extirpate other faiths.

Bangladeshi law prohibits “deliberate and malicious” intent to insult religion as well as language that “creates enmity and hatred among the citizens or denigrates religious beliefs.” Last year the Ministry of Information created a program to monitor the media, including blogs, which it blamed for encouraging religious conflict. Home Minister Asaduzzaman Khan said bloggers “should control their writing” and not hurt “any religion any people’s beliefs, and religious leaders.” Prime Minister Sheikh Hasina Wazed announced: “It’s not at all acceptable if anyone writes against our prophet or other religions.” In the aftermath of the murder of two atheist professors, she said that “they have no right to write or speak against any religion,” that “you have to honor the social values, you have to honor others’ feelings.”

Outside observers fear for the future. The State Department notes in its most recent religious liberty report that “the government made some progress in arresting and indicting attackers of bloggers from previous years, although top officials continued to blame writers for offending religious sentiments. According to religious minority groups, the government continued to discriminate against them in property disputes and did not adequately protect them from attacks.”

Worse, however, has been the rise in private violence. Noted the State Department in 2016: “Terrorist organizations claimed responsibility for a significant number of attacks, many of them fatal, against multiple religious minorities. There were at least twenty-four individuals killed in the attacks including members of the country’s Hindu, Christian, Buddhist and other minority communities. Terrorist groups also targeted religious converts, Shia, and individuals who engaged in activities deemed atheistic.” Hindus constituted the bulk of victims, including, according to State, “priests, temple workers, teachers, and businesspeople.”

The problem is not just terrorists. The State Department noted that religious minorities suffer housing, job and land discrimination. Moreover, individuals, gangs and mobs have attacked the vulnerable: “Communal violence involving minority religious groups continue to result in deaths, injuries, and damage to property.” Added State: “There were a significant number of attacks against religious minorities, particularly Hindus.” Targets included homes and temples. Violence also flared during the violence-ridden election. Even in a Dhaka suburb, noted State, “the media reported hundreds of attackers used sticks and bamboo poles to beat a group of Catholics and vandalize their homes and shops, injuring an estimated 60 people.”

However, most publicized has been the series of attacks on secular bloggers and others deemed to be insufficiently devoted to Islam. Demonstrations have demanded the death penalty. In 2014 a group known as “defenders of Islam” published a death list of eighty-four Bangladeshi critics of Islam, several of whom have been attacked. Another group, the Ansarullah Bangla Team, linked to Al Qaeda and Islamist political party Jamaat-e-Islami, has claimed responsibility for many of the assaults. Commonly small numbers of assailants armed with machetes targeted their victims on the street. Many died; some were maimed but survived.

If this process is not checked, the number of victims will grow. Bangladeshi-born author Rukhsana Hasib warned that “systematic intolerance and human rights abuses” threaten all minorities, including “Hindus, Christians, and Buddhists, as well as secular Muslims and women.”

Christians speak of their fears as some leave Bangladesh. In 2016 militants murdered two converts as well as a Christian grocer. Members of Christian communities point to tension with police over such issues as alcohol consumption. Prominent Christians have received death threats for their public role. Gabriel Amal Costa, a Bangladeshi Catholic missionary, observed that “people had always lived together peacefully in Bangladesh, but unfortunately now Islamic extremism is on the rise.”

Rising radicalism reflects numerous factors. Education is a particularly serious problem. Seeking Islamist support, the government Islamicized school textbooks and elevated the status of degrees from madrassas, which did not follow state guidelines. At the same time, noted Raj Kumar Singh of India’s Bhupendra Narayan Mandal University, “the failure of the state education system is also seeing more and more children being sent to Islamic religious schools,” many backed by money from Saudi Arabia and West Asia, which has “led to the emergence of an intolerant, aggressive and messianic fringe of reformed Sunni Muslims bent on purifying Bangladesh along the lines of the Taliban in Afghanistan.”

Observers also blame the population bulge of young men, lack of adequate educational and employment opportunities, urbanization, and bitter political divisions. Indeed, wrote Singh, many Bangladeshis work overseas, particularly in West Asia and the Persian Gulf. Many come back having adopted local mores where there were employed. They “return home changed almost beyond recognition,” espousing “an intolerant Wahabi-type of Islam that is alien to most Bangladeshis.”

Moreover, the bitter political battle between the two leading parties, linked with contending family dynasties from Bangladesh’s past, has created political instability without a shared commitment to democracy. This has enhanced the role of radical Islamist parties, some of whom have been tied the violence.

Even nominal secularists are encouraging Islamic radicalism. The ruling National Awami Party, which is historically linked to the nation’s founding, formally backs the country’s secular heritage. But in practice the government takes a more equivocal position. Last July, explained the Woodrow Wilson International Center for Scholars’ Michael Kugelman and researcher Atif Ahmad: despite formal government condemnation of terrorism, “troubling developments over the last few months raise doubts about how committed the government is to combating radicalization within society. Indeed, they suggest that the state may be hindering more than helping efforts to tackle extremism—which means that a decrease in attacks on religious minorities and other vulnerable members of society so far in 2017 could be short-lived.”