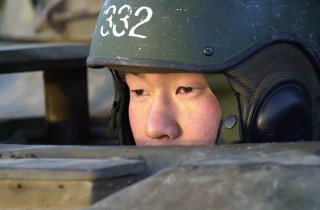 In his New Year’s Day address, North Korea’s Kim Jong-un said his nation was close to testing an ICBM which could hit the United States. Put a nuclear warhead on top and the North will have developed an effective deterrent against the global superpower.

Which means precisely what? He doesn’t believe the Democratic People’s Republic of Korea will be able to develop such a missile or miniaturize such a weapon? That’s unlikely, since Pyongyang’s weapons programs have developed further and faster than had been predicted. American officials might hope for technical difficulties, but it would be foolish to make hope the basis of U.S. policy toward the North.

Maybe the president-elect means, well, nothing. Going back to George H.W. Bush, every U.S. president has insisted that North Korea would not develop nuclear weapons. But it has. Last September, Kim’s regime staged the DPRK’s fifth nuclear test. Trump’s exclamation might be similar empty bombast. Many of his tweets seem likely to fall into this category.

Another possibility is that Trump expects to talk the latest scion of the de facto monarchy into abandoning the dynasty’s geopolitical ambitions. Indeed, during the campaign, The Donald indicated his interest in meeting Kim. But very few Korea watchers believe Pyongyang is prepared to voluntarily cede its nuclear program, irrespective of benefits offered. Trump might be impressed with his own negotiating skills, but he hasn’t been up against the Kim clan before.

The president-elect might plan to follow up his recent tweet by insisting that Beijing pressure the North to stop the latter’s weapons programs. However, China’s influence is limited. More importantly, Beijing is not interested in imposing regime change for America’ benefit, especially since a cut-off of food and energy could result in a messy implosion on China’s border, as well as a unified Korea allied with the United States. So far Beijing prefers the prospect of a nuclear North as a lesser evil.

Finally, perhaps Trump, who during the campaign accused Hillary Clinton of being too ready to go to war, plans to attack North Korea. Or at least commit an act of war by destroying test facilities or downing test missiles. That might work. But it also might trigger retaliation and a much larger war.

In early January, the Wall Street Journal urged the Obama administration to shoot down any North Korean missile. That’s not a new idea. A decade ago Ashton Carter, then merely a former assistant secretary of defense, along with his former boss, Defense Secretary William Perry, advocated that the United States “immediately make clear its intention to strike and destroy the North Korean [long-range] Taepodong missile before it can be launched.” They acknowledged the potential for war, but thought North Korea unlikely to risk conflict. Alas, today the North has additional options for more limited but still deadly responses.

No one would deny the U.S. the right, indeed, obligation, to destroy any missiles that were about to be launched at America. But even the Heritage Foundation’s Bruce Klingner warned against taking military action for anything less: “A U.S. military attack against production or test facilities of North Korea’s nuclear or missile programs could trigger an all-out war with a nuclear-armed state that likely already has the ability to target South Korea and Japan with nuclear weapons, and has a million-man army poised across the DMZ from South Korea.”

Having successfully defended against the resumption of the Korean War over the last 63 years, Washington should not risk triggering another devastating round. Although the DPRK would lose, the carnage could be enormous, especially in South Korea’s capital, Seoul, which lies close to the border.

So what to do? Trump sounds like he has set one of those infamous “red lines,” but, like his predecessor, has set himself up for an embarrassing climb-down when reality inevitably intrudes.

Obviously, developments in the North are unsettling, to say the least. For a small, poor and isolated nation, the DPRK’s weapons development has proved to be surprisingly robust. Its conventional forces are known more for quantity than quality. However, with estimates that even now it may possess sufficient nuclear materials for up to twenty weapons, and could have fifty to one hundred warheads by 2020, the DPRK threatens to emerge alongside India, Israel and Pakistan as a serious nuclear power.

Pyongyang’s existing missile capabilities place much of northeast Asia within reach. The Kim regime conducted more than twenty missile tests last year, including of a submarine-launched ballistic missile, which would extend North Korea’s capabilities. But a flight test for an ICBM would be a first. A working ICBM would put the continental United States within range, though how soon the North could miniaturize warheads and improve accuracy still is unknown. No other small state would have acquired its own nuclear deterrent against the world’s most powerful nation.

The bad news about these developments is obvious enough. The North has made unpredictability the cornerstone of its foreign policy, and the Kim dynasty is not squeamish about bloodletting. Kim’s grandfather started the Korean War. Kim’s father presided over mass famine which killed perhaps a half million or more people. Kim remains relatively untested and has ruled brutally, executing upwards of 130 top apparatchiks.

Yet there is good news, surprisingly enough. All of the Kims, including the current ruler, appear to be ruthlessly pragmatic, determined to enjoy their virgins in this world, not the next. The North Korean bomb is not a suicide weapon. Rather, it fulfills several important roles: defense against the globe’s superpower, which leans toward promiscuous regime change; sign of status, which allows an otherwise irrelevant impoverished land to dominate global headlines; tool of extortion, encouraging frightened neighbors to provide cash and aid; and domestic political prop, aimed at preserving the military’s loyalty.

To the extent that Kim’s public pronouncements matter, in his New Year’s address he talked about “making nuclear weapons a cornerstone” policy so long as the United States and Republic of Korea continue “nuclear threats,” “blackmail,” and “war exercises.” This is pretty standard DPRK boilerplate, but that doesn’t mean there isn’t a kernel of truth. Henry Kissinger is reputed to have observed that even paranoids have enemies, and that certainly is the case for the North. After being tagged as a member of the Axis of Evil by the U.S. president who made his name (and ruined his reputation) by initiating regime change against a second Axis member, Pyongyang would be foolish not prepare against attack. Equally dubious would be relying on any American promises after the Obama administration helped oust the Libyan government which had negotiated away its nascent missile and nuclear capabilities.

All told, the DPRK is extremely unlikely to initiate an attack on America. What would it gain? Almost instant destruction. How would that benefit Kim & Co.? Pretty hard to imagine. So as long as Washington doesn’t start bombing the North, nothing much is likely to happen.

That doesn’t mean the situation is not dangerous. But almost the entire danger to America reflects the U.S. security guarantee to South Korea. Were American troops not present, backing up Washington’s promise to go to war on the ROK’s behalf, Kim would have no reason to pay much notice to America. Kim doesn’t spend a lot of time threatening to turn London, Paris and Berlin into lakes of fire. He has announced no plan for incinerating Indian, Kenyan and Indonesian cities. Washington matters because it has inserted itself into the middle of the messy Korean imbroglio.

So what should the Trump administration do?

Get out of Korea.

The United States is at risk because it has placed itself squarely within the Korean imbroglio. The South’s advantages are overwhelming—about forty times the GDP, a massive technological edge, overwhelming international support, including friendly relation with former DPRK allies China and Russia, and twice the population. There’s no need for American conventional forces to be stationed in or around the Korean Peninsula. Washington should phase out its military presence and end its security guarantee.

In the short-term, the United States should maintain its nuclear umbrella over the ROK. But over time Washington should consider other options, including the possibility of South Korea and Japan developing countervailing nuclear deterrents. That prospect might encourage Beijing to place more pressure on the North to happily short-circuit the entire process. In any case, the United States could decide to maintain its guarantee against a North Korean nuclear attack without maintaining any conventional forces in the peninsula.

An American withdrawal would have several advantages: remove Washington from the center of any Korean conflict, turn responsibility for the South’s defense over to Seoul, eliminate Washington’s role as the DPRK’s enemy number one, reduce perceived security threats against Pyongyang and shift responsibility for lowering regional tensions to countries in the region. The United States still would have interests at stake, but they would remain secondary to those of North Korea’s neighbors.

Having gotten out of Korea, the Trump administration would have more options in addressing the North: engagement over issues short of denuclearization and with limited expectations would make sense. Washington also would be better able to make a deal with China to pressure the North, having demonstrated that the United States would not attempt to use a reunited Korea as part of a campaign to contain China. And leaving the Asian mainland would give credence to America’s threat to back its allies’ potential quest for nuclear weapons, thereby building a Pacific nuclear shield against China and Russia as well as the DPRK.