Will Trump Push a Real 'America First' Doctrine in 2018? 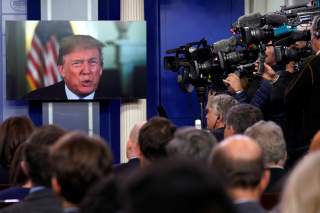 At least Washington should talk about the idea. If Chinese officials heard “Japan” and “nuclear weapons” in the same sentence, they might do more to dissuade Pyongyang from building an arsenal. After all, then they would share America’s nightmare of a nuclear DPRK. And who better to engage in some over-the-top international poker playing than The Donald?

The president announced that he is cutting aid to Pakistan and the Palestinian Authority, though perhaps as much out of pique as for sound policy reasons. However, there is good reason to trim so-called “foreign aid.”

Government-to-government financial transfers are as likely to hinder as aid economic reform, since governments typically undertake politically painful changes only when forced to do so by financial necessity. Moreover, in a world awash with capital, governments with sound economic policies can raise money privately.

Moreover, when political and military assistance is treated as an entitlement, it tends to be wasted and give Washington little or no influence. Israel pockets its money with the assurance that nothing short of a Martian invasion, and maybe not even that, would halt the payments. Washington has no influence in Cairo since American money continues to flow even though repression is worse today than during the days of Hosni Mubarak. Money goes to the Abbas government in the West Bank even though it is both unlawful and repressive; Arab regimes which cry crocodile tears over the Palestinians instead should pay more. None of America’s money promote peace: the likelihood of an agreement is close to that of a Martian invasion.

Even so-called humanitarian aid often has had counterproductive impacts—on local farmers, for instance. Nevertheless, there are areas of great need, such as refugee assistance and health care, where U.S. support helps perform a useful role. However, appeals for this kind of aid cannot justify the other programs. Washington should stop illustrating the old saw that foreign assistance is taking money from poor people in rich countries and giving it to rich people in poor countries.

Moving forward in all of these areas would be a good start for a genuinely “America First” foreign policy. And would yield a significantly better approach to international affairs.

Coopting the president has become a cottage industry at home and abroad. Members of America’s foreign policy elite have done particularly well, complaining about President Trump even while ignoring his wishes at every turn. They are certain to continue doing so, unless he insists on taking U.S. policy in a new direction. It’s up to you, Mr. President.