Would America Really Go to War Over the South China Sea? 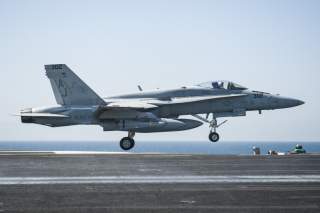 What would America do if China starts to build an island base on Scarborough Shoal, declares an ADIZ over the Spratlys, or in some other way plainly takes steps to strengthen still further its grip on the South China Sea in defiance of international law and American demands?  President Obama ought to think about this very carefully as he visits China for the last time as President, because it has become the question that will define the future of the US-China relationship.

The question is hardly hypothetical. Indeed, it is already being asked, albeit in an apparently rather casual manner, at the highest military levels, as the New York Times reported a few months ago. “Would you go to war over Scarborough Shoals?” General Dunford asked Admiral Harris, in a conversation overheard by a reporter. If Admiral Harris responded, it could not be heard.”

The question arises because over the past few months Washington has appeared to be warning, by word and deed, that it would be willing to use armed force to stop Beijing tightening its grip on the South China Sea. That is the presumed meaning of extended deployments by two Carrier Battle Groups, high-profile visits and statements by the Secretary of Defense, frequent remarks by senior U.S. military officers, and reportedly a phone conversation between President Obama and President Xi.

Issuing this kind of warning is a very grave step. What could be more serious for an American President today than deciding whether, and under what circumstances, America should go to war with China. And yet these warnings have been issued without the question apparently being seriously discussed among U.S. policymakers and analysts – certainly not in public, nor, so far as one can judge from the seemingly offhand tone of General Dunford’s query, in private either.

So are these warnings serious, or just a bluff?

Most people in Washington seem to assume that it will never come to the test, because China would never dare to fight the United States. They take it for granted that China would always back off before America had to think seriously about whether to fight or not.

But they might be wrong. China has issued stern warnings of its own, threatening force against any interference with its claims in the South China Sea. That suggests that they assume America will back off, just as Americans assume that China will – a classic example of mirror imaging between adversaries.

No one should be surprised that China might think this way. Its assumption could be reinforced by a whole pattern of events including the Syrian ‘Red Line’ fiasco, Obama’s prudent caution over Crimea and Ukraine, the isolationist currents in this year’s primary campaigns, and the timid U.S. Freedom of Navigation operations in the South China Sea itself. And of course ultimately the Chinese believe that the issues at stake matter to them much more than to Washington.

It is important to be clear exactly what those issues are. They are not about the rocks and reefs of the South China Sea, or even about the broader principles of international maritime law. Those issues are simply being used, by both sides, in a much deeper contest over the future of the Asian regional order and their respective roles in it. The contest is simple and stark: America wants to remain the leading strategic power in Asia, and China wants to replace it.  The stakes are therefore very high – especially, in Beijing’s view, for China.

When Obama first visited Beijing as president back in 2009, he hoped and expected that China would continue to accept the long-standing Asian regional order based on U.S. strategic leadership. Much American thinking about, and policy towards, China still assumes that Beijing can be gently persuaded to do this.

But all the evidence now points the other way. China under President Xi does not accept the U.S.-led regional order. Instead it wants to build a new order in Asia, based on what Xi calls a “new model of great power relations”. Both sides have chosen to use maritime disputes in the South China Sea to promote their positions. Beijing’s assertive conduct displays it's new-found power and its ability – so far at least – to defy Washington’s censure. Washington has used Beijing’s conduct to stoke Asian concerns about Beijing’s ambitions, rally support against it, and most recently to draw a ‘line in the sand’ to warn Beijing not to go further.

But if Xi concludes that Washington’s warnings are a bluff, he will be tempted to him to try to humiliate him, or his successor, by calling the bluff with an overtly provocative action like building a base on Scarborough Shoals.

And what would Washington do then?  The first step might be to impose economic and diplomatic sanctions.  One can imagine they might include suspending negotiations on the Bilateral Investment Treaty (BIT) and cancelling the next round of the Strategic and Economic Dialogue.  But no one could seriously expect China to buckle under such feeble pressure.

So then the hard question must be answered. We can imagine the scene in the Situation Room. The diplomatic and strategic advisers remind the President that this is not about someone else’s islands or waters: America’s credibility and the future of its leadership in Asia is on the line.  Stepping back and allowing China to defy Washington’s warnings would fatally undermine the entire U.S. position in Asia, and reinforce China’s. The stakes are therefore enormous, and argument for military action is correspondingly clear.

But the military advice is equally clear: a decision for war would be immensely risky and very costly.  There is little chance of a quick, cheap, clean victory. On the contrary, prospects are for stalemate, or escalation, or both.  America would lose significant numbers of ships and aircraft. Allies like Australia and even Japan would be reluctant to be drawn in. This would be by far the most serious U.S. military engagement at least since Vietnam.  No one can say how it would end. And no one can be completely sure that it would end before escalating to the nuclear threshold.

Then the economic advisers chime in, bluntly warning that global economic consequences of even a brief disruption of the US- China economic relationship would be literally incalculable, but plainly far, far worse than the Global Financial Crisis. And the political advisers wonder how all this could possibly be sold to the American electorate.

Then, and only then, with these harsh facts on the table, does the President really confront the choice which will do more than anything else to define America’s place in the world over coming decades. After the Cold War it was easy to assume that America could remain indefinitely the primary strategic power in key regions like Asia, Europe and the Middle East at little cost and with little risk. On that assumption it has been easy for almost everyone to agree that preserving U.S. primacy in these regions was the non-negotiable goal of US policy.

But now that assumption has proved plainly false. In Asia, America is facing again a classic contest of power politics as it seeks to defend its place in the regional order against a very formidable rival. It thus confronts again the hard logic of power politics: that ultimately a country’s place in an international order is defined by the issues over which it is clearly willing to go to war with a great power rival.

So, for example, the Cold War order in Europe was fundamentally defined by the evident willingness of both America and the Soviet Union to go to war with one another to prevent any movement of the boundary between their respective spheres of influence, and that order collapsed when it became clear that the Soviets were no longer willing to do so.

The big question, then, is whether America is willing to fight China to preserve its primacy in Asia?  This question cannot be answered simply by repeating the old lines about the importance of maintaining alliances and upholding the rules-based order. Those are in the final analysis simply means to achieve America’s deepest national aims, not ends in themselves.

So how are those deepest aims – the security of its territory and the health of its economy – really affected by what happens in Asia?  Could America remain secure and prosperous at home without being the dominant power in Asia?  Is that dominance really so important as to justify the immense costs and of a war with China which would itself so gravely threaten both America’s security and prosperity?  These are questions that America must address very urgently.

Meanwhile it should be very careful about issuing warnings to China about its willingness to use force over events in the South China Sea. If it is not willing to go to war, it should stop bluffing. And if it is, it should make that absolutely and unmistakably clear, so that Beijing can be in no doubt. The present ambiguity about America’s resolve is the most dangerous possible situation.