The Sum of Their Fears: The MQ-25 Stingray 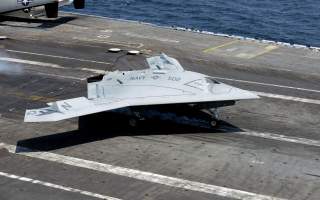 “Something is rotten in the state of Denmark,” sayeth the Bard in a line with ominous foreboding. Such potent can also be read into the decision that Northrop Grumman was dropping out of the competition for the navy’s MQ-25 unmanned tanker. Concerns have been rising since Naval Aviation’s issuance of a request for proposals (RFP) for the MQ-25 Stingray aircraft earlier this month. The description of what is to be the navy’s first unmanned aircraft to operate from a supercarrier, a mission tanker, seemed “off” or “fuzzy” in numerous ways, but the actual document itself so far has not been publicly available for review and hope remained that its contents would provide a path to continued relevance for both the carrier air wing and the supercarriers they flew from. However, Northrop’s decision, along with rumors that another major aviation company is also considering withdrawing, represent fears that the situation within U.S. Navy acquisitions is far from healthy. In fact, it seems we are in for a repeat of a situation that played itself out earlier this year.

The U.S. Navy, through Naval Air and Naval Sea Systems Command, had asked industry for a new long-range surface-to-surface missile. It appeared that the navy had been much impressed with the Raytheon partnered, Norwegian built, Kongsberg Naval Strike Missile after test firing it from the Littoral Combat Ship USS Coronado in 2014 and was looking towards that missile to gradually replace its aging supply of Harpoon missiles over the next decade. A sole source selection process was not followed and an open competition commenced with Raytheon-Kongsberg, Lockheed-Martin and Boeing emerging as competitors. Earlier this year, both Boeing and Lockheed suddenly dropped out of the surface-to-surface competition within days of each other, each citing concerns that the process did not fairly value their designs. Lockheed politely stated, as part of its withdrawal statement, “As the current OTH-WS request for proposal (RFP) process refined over time, it became clear that our offering would not be fully valued.” Boeing went further, bluntly stating that the navy had refined its requirements downward throughout the process, and that they “would have to take a lot of capability out of this existing system and really deliver a less-capable weapon system.”

To be fair, Lockheed and Boeing were designing missiles for a parallel Naval Air Systems Command program that was intended to field a weapon to be launched from aircraft that was much more dynamic—and perhaps even more expensive—than what the Naval Sea Systems Command had in mind. However, it does appear that Naval Sea Systems Command “moved the football” and lowered requirement thresholds to a lowest common denominator in order to favor a simpler and less expensive design, which the Raytheon-Kongsberg missile closely resembled, thus opening the door for the purchase of more missile units at the same cost. The real disjuncture in this process was that the navy writ large could not come to an agreement on one set of requirements for its long-range, surface attack missile and hence created the conditions for two separate programs, with accompanying dual research and design, support and infrastructure costs. From the strategic budgetary level, the process looks broken and inefficient. Now with the MQ-25 program, it looks like the navy may be making a similar mistake again.

Evolution of the Carrier UAV

Naval aviation’s foray into the carrier based unmanned aerial vehicle realm began with the Joint Unmanned Combat Air System (J-UCAS), that grew out of a DARPA funded project from the early 2000s. The J-UCAS program was terminated following the 2006 Quadrennial Defense Review when the U.S. Air Force chose to pull out and push all of its chips into the long-range manned bomber pot. The navy, however, chose to move forward with an Unmanned Combat Air System Demonstrator program built around a design that could provide “persistent, penetrating surveillance, and penetrating strike capability in high threat areas.” The resulting aircraft, the X-47B, represented an all aspect stealth design, which went through extensive tests to confirm its low radar cross section, that had a combat radius of over a 1,000 miles while carrying over 4,000 pounds of sensors and weapons. The two prototypes built under the UCAV-D program were wildly successful. The X-47B landing tests on the carrier were so successful that an algorithm had to be developed to force the aircraft to vary its landing due to its tailhook was digging a hole in the exact same spot on the carrier deck. The tests led to a popular expectation that the 45,000-pound X-47B would be scaled up to a 65,000-pound X-47C. This would provide the carrier air wing with its first capital all-aspect stealth penetrating unmanned aerial strike vehicle with the ability to reach targets over 2,000 miles from the supercarrier’s deck while carrying several thousand pounds of ordnance.

It came as a shock to many when naval aviation shifted away from a well deliberated UCAS-D requirement to a intelligence-surveillance-reconnaissance (ISR) and precision strike requirement in 2011 and then just a carrier based ISR asset in 2014. Costs and the complications associated with the F-35’s development were cited as the reason to avoid going after a complex penetrating strike design, but these concerns were raised with a deliberate blind eye towards the two X-47B prototypes that were executing highly successful test flights in 2014 and 2015. The exact reason for the shift will probably never be known but the deafening silence from active and retired naval aviation admirals following Secretary of the Navy Ray Mabus’ statement that the F-35 would be the U.S. Navy’s last manned fighter demonstrates that there are cultural reasons to suspect that the naval tactical fighter community was uncomfortable with the concept of an unmanned aerial combat vehicle competing for roles, missions, program dollars and spots on the carrier flight deck.

What is clear is that naval aviation, for a period of three years, went all in on pushing for a carrier based unmanned ISR aircraft and heavily encouraged industry to align to that priority. Following the navy’s original intent that it would want a multimission platform that could penetrate contested airspace, Northrop Grumman and Lockheed Martin produced tailless designs. Boeing and General Atomics, on the other hand, promoted more common wing-body-tail configurations based on aircraft they had already designed.

Throughout the process, two subthemes emerged in conversations regarding the MQ-25 program; the first focused on the aircraft’s ability to operate farther from the carrier in contested environments, the second address the aircraft’s ability to perform ISR missions, even as a secondary role. The first would have allowed the platform to evolve over time to take up a penetrating strike role as its systems matured, the second would have restricted such strike mission expansion. Naval aviation resisted efforts to focus the design explicitly on the mission tanking role earlier this year even when directed by senior Navy leadership to focus exclusively on tanker designs, consistently advancing arguments for ISR and long endurance characteristics. After nearly seventeen years of discussions and program development, more than a little confusion had entered the carrier based unmanned aerial vehicle conversation as the navy and naval aviation lost strategic focus.

The Logic Does Not Stand

When the MQ-25 RFP was released in early October, the publicly discussed specifications included the ability to provide 15,000 pounds of fuel at 500 miles from the carrier. Naval officials had previously expanded on this characteristic by stating that they hoped to extend the range of the carriers FA-18E/F Super Hornets to beyond 700 miles, and therein lay a major issue with the RFP. In moving from an unmanned combat aerial vehicle to an unmanned ISR platform thence on to an unmanned tanker, the navy appears to have lost sight of the challenge it was facing.

The contest facing the navy today—in fact the threat that tests the very relevance of each $13 billion dollar supercarrier—is the rise of anti-access/area denial (A2AD) technologies. These include the DF-21D anti-ship ballistic missile, as well as advanced surface-to-air missile systems like the S-400. Against this technical backdrop, a tanker designed to extend the range of two Super Hornets (not stealthy aircraft and with an unrefueled range of around 500 miles) out to 700-plus miles (not 1,000 miles) doesn’t answer the enemy’s strategic challenge and, in fact, cedes the battlefield.

If the navy wants the supercarrier is to remain relevant it would be expected that it request proposals from industry for a tanker that can extend the range of two F-35Cs (stealthy aircraft with an unrefueled range of around 650 miles) to around 1,000 miles. A stealthy aircraft that can fly 1,000 miles and then launch a weapon that can go even farther can be part of the solution to the A2AD threat. To accomplish this, the MQ-25 should have been required to provide sixteen to seventeen thousand pounds of fuel at the 500–600 miles from the carrier range envelope. What’s more, the MQ-25 RFP should have included language that incentivize industry to build an aircraft that could operate in a contested environment and evolve into a penetrating strike bomber over time. In fact, the MQ-25 Stingray really should be a penetrating strike bomber to begin with.