The Ukraine Plane Disaster: Countdown to A New World War I? 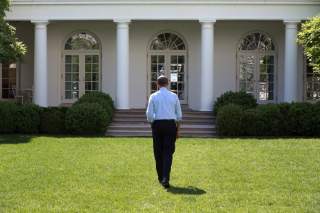 If the horrific downing of a Malaysian airplane over Ukraine was deliberate and carried out either from Russian territory or by separatists, then Russia and the West will move one step closer toward a confrontation that has unsettling echoes of August 1914. Sen. John McCain is warning of "profound repercussions" if it becomes clear that the airliner was shot down by separatists. This would not be a partisan issue in Washington. Both the Republican and Democratic parties would be pushed to condemn Russia and take much more drastic steps to attempt to contain it.

The question for Russian president Vladimir Putin, who has been playing with fire in the Ukraine, is whether he will conclude that the costs of failing to act decisively are higher than retreating. The longer the conflict goes on, the more he may feel compelled to be able to show actual gains. Otherwise he will resemble a high-stakes gambler whose bluff has been called. One possibility may be that the rebels shot down the airplane in order to exacerbate the confrontation with the West--to force Putin to back them more strongly. Another is that it was simply a mistake. But wars can begin from precisely such miscalculations.

Neither Obama nor German chancellor Angela Merkel has much appetite for a military confrontation. The last thing Germans want is to get dragged into a conflict that they view as primarily between Washington and Moscow, much as Germans feared that they would be the battleground for the superpowers during the cold war. But if Russia connivance at destroying the airplane is proven, then this could become a new Lusitania moment for the U.S.

The direction events are moving in Ukraine is clearly strengthening the hand of the hawks in Washington who want to confront Putin and his camarilla. McCain's words are telling. If the plane disaster can be traced to Russia or the separatists, "It would open the gates for us assisting, finally, giving the Ukrainians some defensive weapons (and) sanctions that would be imposed as a result of that. That would be the beginning." The beginning, not the end.

This would not constitute a return to the cold war of the 1970s or 1980s, when the superpowers had largely regulated their confrontation. It might well be more akin to the formative period of the cold war during the late 1940s, when great ambiguity prevailed about Stalin's intentions. Or, to take an even more dangerous precedent, it could resemble the World War I period, when various powers were jockeying for influence and power in the Balkans.

No, history is never exactly the same. But there are enough parallels with earlier eras to hope that Obama can exercise sufficient leadership to extricate the U.S. and its allies from what is fast becoming a treacherous road to war in Ukraine. A real truce needs to be established and the future of Ukraine needs to be negotiated by Germany, Russia, and the U.S. A new Congress of Berlin, akin to the one that took place in 1878, needs to take place.  Like it or not, Obama is being compelled by world events to become a foreign policy president in his second term. Ukraine may prove to be his biggest test.