The US Air Force's Cost Dilemma 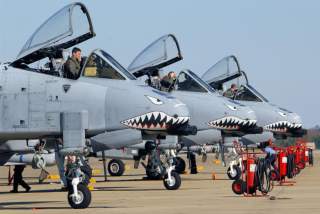 It’s a pretty big mess when the service secretary hasn’t heard about the latest procurement programs—which means that they’re maybe not really procurement programs. They’re at best, as Deborah James recently said with that awkward Washingtonian word, “pre-decisional”. As she further argues, it’s “not at all clear” where the Air Force would find the money in its $166 billion budget request for 2017 to pay for some dedicated replacements for its fleet of A-10C attack jets. Deliberations, she noted to Defense News this past week, are still underway. All the same, finding some money today for some easier-operating aircraft will be important for cutting costs tomorrow, and early discussions with industry are important for finding the answers.

In that budget, the USAF is requesting just 94 aircraft of four types: 43 fighters (F-35As), 15 tankers (KC-46As), 24 attack drones (MQ-9As), and 12 transports (H/M/C-130s). That’s hardly the whole procurement spend; as it stands today, the Air Force is more an Air & Space Force, and pays for a lot of satellites and boosters with those funds. Space consumes a lot less proportionately in operating costs, just because maintenance is hardly possible in orbit—at least today. What’s remarkable, then, is how the USAF’s operations and maintenance (O&M) request ($46.9 billion) is more than twice its procurement request ($22.3 billion). The service has been flying constantly, and for a long time now.

Two types of flying compose this endless equipment-grinding. Some of that has come from bombing guerrillas and armies-without-air-defenses from high-performance fighter jets. That’s inherently expensive, but a succession of presidents and their defense secretaries have shown no interest in letting up on policing the world this way. Thus, preparing for this continuing continuation of politics by other means might be prudent—unless Gary Johnson somehow wins election. Yet that kind of flying doesn’t keep combat pilots proficient in case of combat-in-the-air. The skills are perishable, so those not deployed to combat zones must still fly and drill every month. And amidst all this operational and training intensity, the USAF says that it needs about 700 more pilots than it has today. As Dan Lamothe wrote for the Washington Post, staffing is 21 percent below target. For as the secretary herself noted in an essay for Defense One, that “25 years of continuous combat” has driven people to cushier jobs with the airlines.

What are the alternatives to flying the wings off the new stealth fighters, and suffering an even bigger maintenance bill later? There are two options. The first is to substitute permanence for perishability in flying skills. Software doesn’t need refresher training for landing on carriers or anywhere else. It’s always fresh, and learnings from one landing or maneuver are easily and everywhere extended through the force. This is important because, as I wrote back in 2013, there’s money to be saved in not flying. Flying hours are 20 percent of the whole Defense Department’s O&M bill, and across the service life of manned combat aircraft, 70 percent of flight hours are for training. So more drones on lower-threat missions means lower procurement costs now, and much lower operating costs in the future.

The second is to find manned aircraft sufficient less costly to fly, because it’s possible that some missions are better accomplished with pilots in cockpits. Fortunately, lots of pilots around the world have lots of experience with the right planes. On War is Boring, Sebastien Roblin offers a throughout recounting of the Nigerian Air Force’s experience with Alpha Jet attack-trainers against Boko Haram and earlier miscreants across west Africa. It’s easy to find information on similar counterinsurgent uses of Aero Vodochody's L-series jets or Embraer’s Super Tucano turboprops. As I argued on here the other week, that’s starting with the answer—just doing what others already do well and cost-effectively. It’s the exact opposite of the approach of the Army Department’s bureaucrats to buying a new pistol—let’s spend two years and $17 million testing what every police department in the country has already thoroughly tested. That’s why Army Chief of Staff General Mark Milley mused openly about just taking that $17 million to Cabela’s and negotiating a bulk buy—in a day.

One of these approaches delivers quality goods fast without undue expense; the other does not. Someone, of course, might have usefully briefed the boss in advance of the notional plan. Even so, we should hope that the secretary’s reasonable distance from the ideas of some of her generals should not discourage more outreach to industry. The set of plausible short-term answers is usually circumscribed, so dialog with marketers and design engineers is essential to learning the state of the art of the possible.

James Hasik is a senior fellow at the Brent Scowcroft Center for International Security, where this piece first appeared.